Wislawa Szymborska: "One hole in the net" 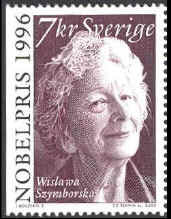 Thursday, July 2nd, is the birthday of the fine Polish poet, Wislawa Szymborska. Wikipedia characterizes her work as follows:

Szymborska frequently employs literary devices such as
irony, paradox, contradiction, and understatement, to
illuminate philosophical themes and obsessions.
Szymborska's compact poems often conjure large
existential puzzles, touching on issues of ethical import,
and reflecting on the condition of people both as individuals
and as members of human society. Szymborska's style is
succinct and marked by introspection and wit.

This is absolutely true and so cold as to convey nothing of the feel of her work. What is missing is the deep running emotion; time and again, I find myself deeply moved by her words. The imprint of 20th century European history is the touchstone of much of what she does, as with nearly all Eastern European poets.

Here's a poem to that point:

Children of Our Era

We are children of our era;
our era is political.

All affairs, day and night,
yours, ours, theirs,
are political affairs.

What you say has a resonance;
what you are silent about is telling.
Either way, it's political.

Even when you head for the hills
you're taking political steps
on political ground.

Even apolitical poems are political,
and above us shines the moon,
by now no longer lunar.
To be or not to be, that is the question.
Question? What question? Dear, here's a suggestion:
a political question.

You don't even have to be a human being
to gain political significance.
Crude oil will do,
or concentrated feed, or any raw material.

Or even a conference table whose shape
was disputed for months:
should we negotiate life and death
at a round table or a square one?


And here is the personalizing of the political which reveals the emotion beneath:

It could have happened.
It had to happen.
It happened earlier. Later.
Nearer. Farther off.
It happened, but not to you.

So you're here? Still dizzy from
another dodge, close shave, reprieve?
One hole in the net and you slipped through?
I couldn't be more shocked or
speechless.
Listen,
how your heart pounds inside me.


Some quick notes of interest:

outlaw poetry and free jazz network has reprinted
a review I wrote for The Small Press Review of the
book/dvd d.a.levy & the mimeograph revolution
book, edited by Larry Smith and Ingrid Swanberg.
The review is at the bottom of the post.

A new companion journal to daily haiku entitled
daily haiga is set to launch today. Check it out.

The Smoking Poet has put out a call for poems.
Frankly,most work they use is much longer than
the Lillie focus but, then again, whose isn't. They
also use fiction, reviews, flashfiction, and book and
cigar (!) reviews. Why not air out some of your
longer work here? Submission guidelines.

There is a new website with the complete list,
plus links, to the songs featured on the weekly
postings from Best LitRock Songs from Issa's
Sunday Service. The site will be updated weekly.

As mentioned in Ron Silliman's blog, there is an
interview up at Capital City Weekly with Alaska
poet Ken Waldman, whose work has appeared a
number times in Lilliput, as well as being featured
in a few posts here at Issa's Untidy Hut. Cheers,
to Alaska's fiddling poet!

This week's featured issue is #22, from May 1991. I've mentioned in a few previous posts, the further back we go, the more removed I feel. However, I've found this little issue packed with poems that still resonate for me today. Here are a handful:

how much
life loves
life!
a wreath
of over-
ripe history
decays
and drains
downward.
feeding tap
roots with
bombings,
war.

Last night the past broke
and there was history
all over the cellar.
You should have seen it -
Rome was here, Greece was there,
Egypt floated near the ceiling--
finally I had to
call a historian:
and you know what they charge
for emergencies.


the dead walk the earth

walking thru minefields of my desire
my boots slosh & leak blood

I've become my own ghost

that I killed him


Influences Carried By The Wind

Not the least demonic would have you think
your face doesn't look like a face,
or you have none: it never bloomed.


in the thicket no one
knows about
trees budding bright

One of the great horrors of our time is that "children of our era" is true. A fine poem. It captures it well.

Great posting Don...and what a fantastic issue of Liliput that 1991 one was.

My daughter, a history major, just graduated. Gainful employment is hard to find even for a plumber, let alone a history major. I'm sending her that poem.

first re:connection for me was Cid...

he introduced me to among a few other's ...Lilliput and you

a major discovery for me who knows so little.

this post ... well, each one better than the previous one..


I really appreciate the selections from the early issues...

our "Ordinary Fool" yet doing things by hand... one sheet, one person at a time

Charles, yes, horrors is the correct word - today's horrors are so fragmented, will they be captured with the precision and resonance of a Szymborska?

Jim, I'm sure this is exactly how this poem was meant to be used! Sometimes we write a poem for a specific person even though we don't know who that is -

Ed, Cid's introducing you to Lillie is one of the important things that happened around here. Surely, you've brought so much more to Lillie than vice versa ...

My first library job, we used to produce our catalog cards on those old Gestetner mimeograph machines - while running, we'd go stand by them to take the edge off the coffee and cigarettes ...