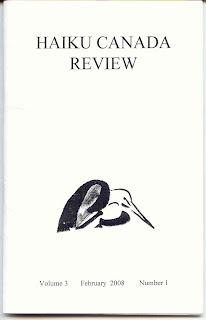 Today, I thought I'd share one of a handful of haiku journals that I really love: Haiku Canada Review. HCR is the publication of Haiku Canada, which is a society of "haiku poets and enthusiasts." The review publishes works by members and non-members alike, both traditional and non-traditional haiku, as well as haiku-related essays, haibun, linked verse (renga), and reviews. The issue I'm looking at also has 9 pages of haiku in French; I'm not sure if this is a regular feature. The magazine comes with a $25 membership and is, in my estimation, something of a bargain if you cost out how many good poems there are (and if you figure out how to do that, let me know). It is published 3 times a year in February, May and October, which means I'm at least one issue behind, reading-wise. In addition, Haiku Canada Sheets often accompany issues, usually focusing on the work of one particular member. More of that below.

HCR is edited by LeRoy Gorman, someone whom I have a great deal of admiration for as both an editor and poet. I've learned a great deal from studying his editorial eye over the 10 plus years I've been reading this magazine and owe a large debt to him for all the ideas learned and, I'm sure, stolen from his insightful approach.

The February 2008 issue is 58 pages long (counting the back cover, which I do since there is an excellent haiku by Natalia Rudychev printed there). By my approximate count, there are well over 200 poems here. Of the 200 plus I marked 17 as quite good, indeed, plus a linked sequence of 34 poems by Bruce Ross and Brent Partridge entitled "Another Heaven," which is one of the finest I've ever read (N. B. I am neither a fan of linked verse or of haibun in general, but HCR often shows me the error of my ways). Here's just a taste of some of the work:

hauling home
the Christmas tree bringing
the mountain with us

I AM - looking at stars through a straw


chicken coop
a sashaying coyote
and a thousand stars

From an article entitled "Wordmusic" by Gerald St. Maur comes this tanka:

With the sun behind,
you stand like a mythic swan,
the glare so blinding
I can't tell which is the way
to heaven or which to hell.

Growing older
I have further to return from
when awakening


A moment
left his deathbed
to give his
flowers water.

old folks' home-
--the square of light
-----crosses the room


I can't even begin to describe how beautiful the sequence "Another Heaven" by Bruce Ross and Brent Partridge (in mostly alternating verses) is, so I'll just tempt you with the first 6 verses:

lotus position
a speck of snow
on Buddha's thigh (BR)


the tip of a feather
brushes across a forehead (BP)


walking more lightly
in a haze of pollen (BP)


like a breath– the sun
breaks into a dream (BP)

You can feel a narrative begin to develop as the poets go with each others work. Some sequences of this sort work at odds with each other (or amongst, when more than one other poet is involved), but as this sequence develops you feel the poets' egos have truly dropped away and the sequence and the poets are one.

Also, there is this beautiful one word poem that is at once humorous and, quickly upon the heels of laughter, resonant:


letting go is the Haiku Canada Sheet that accompanied this issue and is simply stunning. A trifold 8½ x 11" sheet with 12 poems letting go is by one of truly fine purveyors of haiku in English today, Natalia L. Rudychev. Every single one of these poems spoke to me and, frankly, that's unprecedented.

silence between us. . .
cherry petals
in flight


nameless–
a stepped on flower
slowly reshapes itself


There is so much I could say about all this work, but that is not really the point of great haiku, senryu, renga and the like. Truly great work in the shorter Eastern modes allows the reader to participate in the creation of the verse itself; an essential element of the traditional haiku is leaving space for this type of participation to happen. In essence, the poem completes itself in the readers' mind.

What more could a poet ask of the work s/he creates? Here is the path to immortality, immortality of the moment in the moment: the teeny bud within the drop of dew.

If you are either a haiku poet or enthusiast, as stated above, Haiku Canada Review is an essential read. Over 600 poems for $25 a year?

Hmn, even I can do that math.


This week, it's time to revisit Lilliput Review #19, from December 1991. 19 years ago. This tour of the archive is beginning to wind down. Originally begun as a count up from issue #100 back on July 17, 2007 at the old Beneath Cherry Blossoms blog, continued with a countdown from #99, it should finish sometime in the next 3 months. There are newer issues that I haven't covered (151 through 168) and then it'll be time to make a decision as to what direction the blog should take. Because of a lack of time, I haven't had an opportunity to link all the posts back into the archive but hopefully that will happen sometime. It has been really great to share 20 years of poetry with samples from nearly every issue published.

#17 contained some political rumblings - the first Gulf War had "concluded" earlier that year, but it was the beginning of the morass in which we find ourselves currently embroiled. Philip Waterhouse's short poem manages to cram in a lot of history and culture in 9 short lines and the mood seemed to echo throughout even the "non-political" poems in the issue:

What say we all meet
for r&r at the Khyber
Pass with Cary and Doug.
Drink pink ladies concocted
by Gunga Deen. Dig for
meerschaum. Anything. To
get rid of this cloud
of planets buzzing around
inside our skulls.

while the old stones crumble
we find new forms of fucking:

parthenogenesis, & mouthless
children climb up from the ruins

not shrinking back
from the sunset...
wildflowers

Thanks for this real good stuff. My two favorites:

I AM -- looking at stars through a straw (by McMurtaugh)

and the one about geese by Natalia L. Rudychev (oh, yes...this one is crushingly, succinctly poignant...just perfect).

Thanks, Tim ... I feel the exactly same way about much of what Natalia L. Rudychev writes. Amazing work ...

Somehow McMurtaugh captured a moment that feels like a childhood revelation there, no easy task.


is Tom Noyes yet living in Greece (Attikis)?

Great stuff, as always. I really like the six verses of the longer piece you mentioned. I had not heard of Haiku Canada.

Ed, glad you liked these, it is great stuff - Tom still in Greece, I believe - he is outstanding.

Charles, glad you, too, liked these, sorry to tempt you with just the first 6 ...

great review. never read Haiku Canada but now trying to rearrange some funds. the start of that sequence is really well done.

Thank you for building this blog. It's so helpful to anyone learning to haiku like me..

Hey, Greg, glad you liked it. More forthcoming to you and Charles.

WS, very happy that you enjoyed the post/blog. Reading your haiku at your blog, your spirit comes through. Keep up writing, studying, exploring ... Don

What an enjoyable posting! I'll see if I can't subscribe to Haiku Canada and have it delivered to my Detroit address- not always as easy as it sounds...