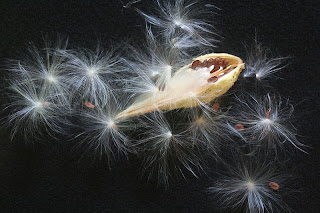 While doing research at the library on James Wright for a forthcoming poetry discussion, I've discovered many things. First and foremost, I've connected with some poems that I hadn't previously, such as "A Prayer to the Lord Ramakrishna." In addition, I've been reading lots of criticism, the Paris Review Interview, and pieces of memoir. In a chapter from his book, American Poetry: Wildness and Domesticity, Robert Bly talks about Wright and their relationship and how he sees his friend's work. The lens Bly uses is, as is often the case, a large and refractive one; his debt to Jung is obvious and, on my part at least, frankly welcome. On occasion, this approach does lead to some fantastically awry notions, yet he ventures into new territory with fresh eyes and always has something interesting, often profound, to say. More often misinterpreted than misinterpreting, Bly's only "problem" is he frequently spoke in metaphors that appalled the dull-minded literalists of this world.

I'll side step for the moment his in-depth "analysis" of the poetry and recount an incident he relates as it informs one of the strange and wonderful poems in The Branch Will Not Break. Here is the poem:

While I stood here, in the open, lost in myself,
I must have looked a long time
Down the corn rows, beyond grass,
The small house,
White walls, animals lumbering toward the barn.
I look down now. It is all changed.
Whatever it was I lost, whatever I wept for
Was a wild, gentle thing, the small dark eyes
Loving me in secret.
It is here. At a touch of my hand,
The air fills with delicate creatures
From the other world.

There is such an air of mystery one forgets sometimes that what is happening is very real. The poem itself might serve to sum up the entire quest which is The Branch Will Not Break. Early on in the book, the poet is striving to find himself, is lost, trying to understand how this happened and what is his relation to the world. The event is chronicled beautifully in "Lying in a Hammock at William Duffy's Farm in Pine Island Minnesota." In turning to nature, the poet does find himself in the world relative to what surrounds him. And here in "Milkweed," this revelation is reprised with a stunning lyrical beauty.

I read this poem many times and, as a writer, kept thinking of the final 3 lines as an analog for the writing process itself and, of course, they are. But they are first and foremost a lyrical depiction of a very real event: the bursting of a milkweed pod by the poet. This poem has threads that lead back to other major poems in the volume. The images themselves, the surrounding fields, the lumbering animals, the small house may all be found in "Lying in ... ." The wild gentle thing, the small dark eyes, seem at once to recall the pony in "A Blessing" and the poet's cherished secret in "The Jewel." The 3 final lines echo the haiku-like succinctness of the final 3 lines of "A Blessing", and all 3 poems share variations of a powerful revelation in the final lines.

Bly jokes in his essay that Wright's bursting of the milkweed seed pod might not have been the best thing for the surrounding fields but, as he says, never mind that for the moment.

For the moment, indeed. For myself, lyrically speaking, the delicate seeds scattering on the wind all gather together as the poems in The Branch Will Not Break, one of the 20th century's finest volumes of poetry. It never ceases to shake me, to touch me, to move me as deeply as the written word ever has.

A second thing I've discovered while doing background work was James Wright's love of the poet Georg Trakl (this link is a pdf document for those who avoid such things). And he has passed it on. I'm hooked. But I'll save that for a future post.

This week's featured issue is #155 of Lilliput Review from 2007. Here are 5 very brief poems that reach for it all. Enjoy.

Saturday midnight is the deadline for the 2nd Annual Bashô Haiku Challenge entries so, procrastinators, start your engines.

While polishing up this post this morning, Curtis Dunlap i.m.ed me to let me know he was reprinting an Albert Huffstickler poem from a back issue of Lillie. Here is the link; check out the lovely photo of Huff. And in related Huff news, Felicia Mitchell has started a Huff page on Facebook on which lots of remarkable things are being shared.

Milkweed is very nice. I read a lot of Wright's poetry years ago but have not revisited for too long.

Thanks, Charles - I, too, am returning to Wright, it seems again and again. It's been a moving experience.