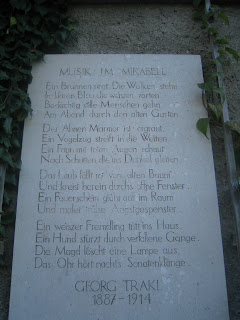 For translation, so below

A while back, I did a post on Georg Trakl, mentioning the translations by James Wright and Robert Bly, entitled 20 Poems (available online as a .pdf here). I've finally found the time to read through the translations a couple of times and my enthusiasm for his work is unabated.

The appeal to Wright and Bly is apparent; these two poets, known for their "involvement" in the deep image movement, find essential source material in Trakl's work. The poems revolve around the images, many of which appear as motifs, even in such a small selection of Trakl's work. The abiding feeling I get is one of evocation; the poems do not posit answer or philosophy or even present an open-ended question. It seems to me that they are really the stuff of archetype, a kind of dream-like essence that dwells firmly in the border between the conscious and unconscious. A dream-poetry, a Jungian poetry, probing into the uninterpretable human spirit.

Once more following the blue grief of the evening
Down the hill, to the springtime fishpond–
As if the shadow of those dead for a long time were
------hovering above,
The shadows of church dignitaries, of noble ladies–
Their flowers bloom so soon, the earnest violets
In the earth at evening, and the clear water washes
From the blue spring. The oaks turn green
In such a ghostly way over the forgotten footsteps
------of the dead
The golden clouds over the fishpond.

The best of Trakl's work is firmly grounded in nature; one thinks of Wright's The Branch Will Not Break, the most naturalistic of his works. In actual execution, the work itself feels closer to Bly than Wright; better than Bly, hitting a universal chord Bly frequently speaks of but doesn't quite achieve lyrically. This is, of course, strictly a matter of taste. Trakl's work is haunting and it lingers with me long after I've put it down and, siren-like, summons my return as to an elusive, spirit-infused wood.

What is hinted at in many poems is most explicitly sketched in the following, which conjures a sort of contiguous sense of all time. There is an historical tapestry here, yet that seems to be something of a background against which a larger story is unfolding, one that mixes equally the sadness and sweetness of existence itself.

Song of the Western Countries

Oh the nighttime beating of the soul’s wings:
Herders of sheep once, we walked along the forests
-------that were growing dark,
And the red deer, the green flower and the speaking
river followed us
In humility. Oh the old old note of the cricket,
Blood blooming on the altarstone,
And the cry of the lonely bird over the green silence
-------of the pool.

And you Crusades, and glowing punishment
Of the flesh, purple fruits that fell to earth
In the garden at dusk, where young and holy men
-------walked,
Enlisted men of war now, waking up out of wounds
-------and dreams about stars.
Oh the soft cornflowers of the night.

And you long ages of tranquility and golden
-------harvests,
When as peaceful monks we pressed out the purple
-------grapes;
And around us the hill and forest shone strangely.
The hunts for wild beasts, the castles, and at night,
-------the rest,
When man in his room sat thinking justice,
And in noiseless prayer fought for the living head
-------of God.

And this bitter hour of defeat,
When we behold a stony face in the black waters.
But radiating light, the lovers lift their silver eyelids:
They are one body. Incense streams from rose-
-------colored pillows
And the sweet song of those risen from the dead.

The overall mood is of dread, foreboding. All of history comes to Trakl's point in time; World War I and its coming horrors, of which he was a victim, are pre-figured here through the lens of history, yet Trakl is not after the political. The most salient point, his true focus, is humanness, human existence. There is a sense of loss: the loss of nature and a related innocence. Two of Trakl's poems I highlighted in an earlier post capture nature before this loss. Not many of his predominately naturalistic poems are contained in the selection by Wright and Bly, though naturalistic elements permeate the work throughout.

Just as Trakl's poems seem to dwell in a place between the conscious and unconscious, they also seem to inhabit an imagined space between the poems of Wright and Bly themselves. Here is the stuff of dreams, and something more:

Silence in the rented room.
The candlestick flickers with silver light
Before the singing breath
Of the lonely man;
Enchanted rosecloud.

Black swarms of flies
Darken the stony space,
And the head of the man who has no home
Is numb from the agony
Of the golden day.

The motionless sea grows dark.
Star and black voyages
Vanished on the canal.
Child, your sickly smile
Followed me softly in my sleep.

The sense of foreboding in Trakl is the main focus of the 20 poems translated in this little collection. In "Birth," there seems to be a balance achieved between the prophetic and the pastoral; ironically that balance seems to be man himself.

These mountains: blackness, silence, and snow.
The red hunter climbs down from the forest;
Oh the mossy gaze of the wild thing.

The peace of the mother: under black firs
The sleeping hands open by themselves
When the cold moon seems ready to fall.

The birth of man. Each night
Blue water washes over the rockbase of the cliff;
The fallen angel stares at his reflection with sighs,

Something pale wakes up in a suffocating room.
The eyes
Of the stony old woman shine, two moons.

The cry of the woman in labor. The night troubles
The boy’s sleep with black wings,
With snow, which falls with ease out of the purple
-------clouds.

Perhaps the two threads of nature lost and coming dread are inextricably woven together. As with Wright's work, I want to read hopefulness in the natural world, even with its built-in dread, and not the loss of nature due to man's perception of being outside of or over nature. As with Wright, however, one doesn't get one's wish. What one does get is a unique, poetic panorama, a haunting vision that's is at once powerful, delicate and a thing of beauty: the poetry of Georg Trakl.

Pictured above is Trakl's grave marker, with his poem "Music in the Mirabell" inscribed in stone. As may become apparent in the poem, Mirabell is a garden. Here is an English translation of what is described as the "second version" by Alexander Stillmarker, in a volume I just purchased, Poems and Prose, published by Northwestern University.

Music in the Mirabell

A fountain sings. Clouds, white and tender,
Are set in the clear blueness
Engrossed, silent people walk
At evening through the ancient garden.

Ancestral marble has grown grey.
A flight of birds seeks far horizons.
A faun with lifeless pupils peers
At shadows gliding into darkness.

The leaves fall red from the old tree
And circle in through open windows.
A fiery gleam ignites indoors
And conjures up wan ghosts of fear.

A white stranger steps into the house.
A dog runs wild through ruined passages.
The maid extinguishes a lamp,
At night are heard sonata sounds.

I decided to feature poems from the broadsides and leave the longer poems and chapbooks for some future time. So, here from the poet David Chorlton's 2008 Lilliput broadside, Venetian Sequence (Venice, twice in one post), is his poem "Of Sighs." The title refers to the famous bridge in Venice named "The Bridge of Sighs." The bridge was named by Byron, who helped popularize the myth that prisoners headed toward their execution got one final look at the lovely Venice through one of the bridge's small windows and sighed. David here extends the prisoner's imagined experience to what might be heard:

From the sentence to the executioner
the way is short and the windows
on the bridge prevent the prisoner
from looking at his reflection
in the water below, although he can hear,
between the words of his accusers,
the murmur of the pigeons
nesting in the mane of a lion’s head.

For another poem from the 15 poem sequence, "Paganini," check out this post from when the broadside originally appeared in March 2008. For more info on Lillie broadsides, check here.

There have been many musical pieces referencing this famous bridge. In rock, there is Robin Trower's rendition. In folk, there is a song by legendary Ralph McTell, which seems only to be related to the bridge by title. Here is an instrumental by one of my favorite world fusion band's, John McLaughlin's Shakti:


PS. For those of you receiving posts via email, you may not see icon for Grooveshark song (or YouTube videos in other posts). Just sayin' ... you might want to click through.
Posted by Issa's Untidy Hut at 6:44 AM

first intro to Trakl around here was via Stanley Kunitiz long about 1975 or so. Kunitz used to drop-in on Rudd Fleming at U of Md. Here is a site that s got much..

especially "potent" the last two lines of each poem

that "silver hand" putting out the candel... WOW!

Ed, slowly is, indeed, the key - I've been haunted by these ghosts, in all manner of translations, for weeks know. The image of deer, tentative, at the edge of the forest resonates way beyond anything similar in any other poet ... taking a basic image and transubstantiating it - amazing.

The Trakl link is great - I put it permanently on the blog page for folks hopefully to stumble into, as they, tentatively, approach the edge of the forest ...

"Song of the Western Countries" is indeed as haunting as you say. Looks like Trakl is a poet whose work i'll have to venture into. Thanks for the links and insight, D.

We've got a couple of good Trakl translations at the library up in the IP room. Another dimension, compared to the Bly/Wrights translations, also many more poems that give more of a cohesive sense of his vision and it was ethereal. Glad these resonated for you.