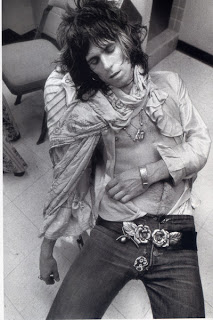 Friday, December 18th, was the birthday of Keith Richards and so, running perhaps a little counter to seasonal sentiment, this week's selection is "Sympathy for the Devil" by the Rolling Stones. The list of historical events is obvious, but what's the lit connection, you might ask? Jagger has claimed that the song was influenced by French writing, particularly Baudelaire, but isn't really exactly sure. Folks have pointed out a lot of parallels to Mikhail Bulgakov's classic novel, The Master and Margarita, and though this connection may be tenuous I'll take it, coupled with Jagger's account, and call it a LitRock sizzler. Though originally attacked by fringe groups as promoting Satanism, the songs strong moral underpinnings are rather obvious to anyone who bothers to listen. That the singer takes the persona of The Devil certainly has its model in religious sources, in the West starting with the Bible itself (which, of course, is a 3rd lit reference).

As a bonus, here's a live performance by the Stones, arguably at their creative peak from their film, "Rock and Roll Circus."

Though I've featured most of the poems from the double sized issue, #53, from February 1994, in two previous posts, I've managed to dig out one more little gem that I somehow overlooked. So, this week's feature poem by Hugh Hennedy:

Like isolated notes
Blackbirds stand on the wires
In the fog off the ocean, and the music
Sounds slow and quiet,
Mostly strings down low


And one from Issa:

wisteria in bloom--
voices of pilgrims
voices of birds


PS If you receive The Hut via email or a reader, you may miss audio and video attached to posts, especially Issa's Sunday Service. For the full post, just click through.
Posted by Issa's Untidy Hut at 9:00 AM

There's a song I can sink my teeth into. Love it. I definitely consider it lit rock.