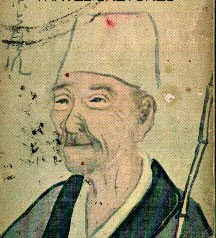 After weeks of working through nearly 500 haiku from 99 poets, I've made a final selection of 56 poems to be published in the 2010 2nd Annual Bashô Haiku Challenge chapbook. Though I received 3 times as many entries as last year, the task seemed a thousand times more daunting. I set no particular limit or had no particular length in mind for the chapbook, so the final selection represents only the highest quality of work I received. Last year's chapbook contained 25 haiku, making this year's over double the size. I would have been happy to publish another chap of the same size, but the quality of entries demanded a weightier book and I am even happier to oblige with that.


The winning poem comes from William Appel of Japan:

Leaf
falling off
the mountain


I will let William's poem speak for itself, only saying that to evoke the entire macrocosm via one of its smallest components, in just 5 words, is a daunting accomplishment and the stuff of great haiku, indeed.

The five runner-up poems, each of which will receive a book from Jim Kacian's red moon press (page down a bit at this link for the titles), plus a 6 issue subscription to Lilliput Review and two copies of the chapbook upon publication, are as follows:


waiting for you --
the window changes
into a mirror


Up the river –
a boat splits
the Milky Way


in and out
of the ambulance's wail
birdsong


standing among the aspens just one of the grove


Choosing these 6 poems among the 56 selected overall proved to be quite a challenge, so the title, Bashô Haiku Challenge, swings both ways, for the editor as well as the poets. I'd like to thank everyone who participated this year and say sincerely that, though the task was massive, it was well worth the effort. The work brought great joy, sadness, and the myriad gamut of emotions that move between.

Part 2 of the "daunting task" begins with the shipping out of the 6 prizes and 6 issue subscriptions to all 50 plus poets whose work will be included in the forthcoming chapbook. I anticipate publication of the 2nd Annual chap to be sometime mid-year 2010. I sincerely hope to get all of the new subscriptions out in the mail over the next 4 weeks. Since this happens to dovetail with the new issues going out to current subscribers, I'm not quite sure how I'm going to pull it all off. Bear with me, folks - all good things are worth the wait, as the cliché goes.

One last note for the moment about the contest; I'd like to particularly thank the online haiku community for embracing and promoting the challenge. The amount of international submissions I received (and accepted for the chapbook) was truly amazing. Thanks particularly to haiku societies in Australia, Canada, Croatia, and Great Britain and, I'm sure, others I wasn't even aware of that sent out notices about the challenge. Thanks, too, of course to all who submitted and the stateside folks, such as Jim Kacian at red moon press, that really gave the whole idea a nice lift. I'm sure I've forgotten someone but you get the idea: I am grateful, indeed.


The new issues, #'s 171 and 172, begin going out this week, contributors having just received their copies. With an additional 50+ copies to be printed, collated, folded, and stapled (see above), it will be awhile before they all get in the mail. I'm hoping to post the majority of them over the next 4 weeks, but chances are it may take a bit longer.

Ah, the price of success of a one-person operation.

This week's featured issue is #169, from July 2009. With next week's feature, almost all of the anthology issues from the last 20 years will have made been highlighted on the blog over the years. I've been thinking about what direction to go in future posts. More about that soon. Meanwhile, enjoy these highlights in their attempt to counter the darkness of the coming season:


A good poem
Should smell of tea,
earth or newly split wood.
A few words piled together
To make something of a hut.

there was a time
when thinking of sunflowers
sunflowers appeared

My childhood flowered :: with a color I can't finish

Excellent pieces. I feel a sense of peace just reading them, although I can imagine making the choices must have been hard work.

great choice for the winning poem! that one really sticks with you. can't wait to read the rest of the poems in the chapbook.

Glad you like 'em, Jay and Charles - putting together the chap will be the next challenge -

Greg, that little five line poem just stuck with me from the moment I first read it ... like a winning horse on the pole from the start, all the way to the end ...

Interesting choices; each seem to speak life to the form in different ways, and hearing that they come from different countries doesn't surprise me.

Congrats to the winners, but also to Don, who deserves a hand for what sounds like a rather challenging task. On the other hand, it's pretty impressive that you had such a large, global response.

A, many thanks, glad the choices are intriguing -

Am absolutely swamped with work I created for myself. The Jeffers continues to baffle and amaze. More on that soon, I hope ...

A wonderful collection. Glad that I stopped for a read.

Thanks, PH, much appreciated ...