splakeus and lillies: a collection of short poetry 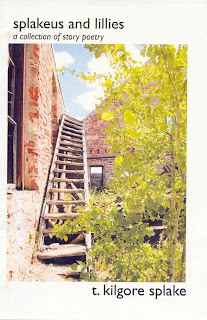 t. kilgore splake has been with me, that is has been publishing in Lilliput Review, since almost its inception in 1989.    An upper Peninsula of Michigan poet who has dedicated all to the muse (or the Muse), he rides the wave of words from Whitman through Kerouac, Vonnegut, Ginsberg, Brautigan, Jim Harrison and on and on.  When I think of Albert Huffstickler, I think of t. kilgore splake, poets who reach beyond the normal poetry audience and touch the hearts of everyday folks, and yet, at the same time, are poets' poets, at least in the universe of the small press.

splake volumes arrive in my mailbox with astounding regularity, as do big fat envelopes full of poems, musing letters, and rafts of articles from here, there, and everywhere.  The latest collection to come my way is pictured above, entitled splakeus and lillies (Moon Publishing), revealing in the title a thing or two about its creator.  The lillies of the title are not misspelled, as one might think at first glance: those lillies are these Lillies, issues of Lilliput Review or, more specifically in tom's case, short poems, which he refers to as "lillies" as a kind of homage to the little magazine for which this is the blog.  In a delightful example of the kind of hyperbole mr. splake is capable of, here is his explanation:

since 1989, the term "lillies" has come to define the short poem in the world of american small press operations (italics added).

So, letting that serve as both an explanation, a disclaimer of objectivity, and a magnificent example of what Huck Finn characterized as "a stretcher," here are three little gems from this collection, replete with the stripped to the bone punch and power of the short poem as executed by t. kilgore splake:


This week's featured poems, two of them this time, comes from issue #118, a broadside by M. Kettner entitled "Highku."    The title says it all:

#795
high:
ocean breeze
on a crate of oranges


And one from the master:

"...since 1989, the term 'lillies' has come to define the short poem in the world of american small press operations (italics added)."

Henceforth I'm going to have a hard time not thinking of any beautiful and deep short poem as a "lilly".

Don, if anybody since R.H. Blyth has done more than you to define for us the essence of this essential heart-form of the poem, I don't know who it is.

Thanks for everything, always.

Well, this small collection of words means so very, very much ... thanks.

"Essential heart-form of the poem" - I will be remembering that myself, as it feels as if a link to sutras
of yore.

grabbed my me I just ate it ... entirely

Thanks, Ed ... glad you got a taste of T. Kilgore Splake - a regular correspondent of Albert Huffstickler - all around good guy, working his row, day after day, year after year -

I very much appreciate your kind words - lillies, indeed. Don