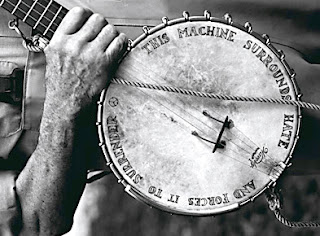 Sometimes the sacred books dovetail together nicely and "Turn, Turn, Turn (to Everything There is a Season)," from the Book of Ecclesiastes, is something of the Judeo/Christian tradition that recalls the Tao, Confucius, fundamental Buddhist texts, the great classicists and more.

In other words, it brings the real.

The Byrds had a big surprise hit with "Turn, Turn, Turn" in 1965.  Here is a lovely rendition by Judy Collins, accompanied by the man who wrote the melodic adaptation, Pete Seeger, from his TV shadow in the mid-60s.


Listen closely to the notes played just before they begin - I'm hearing a bit of "Here Comes the Sun" - 3, 4, 5 notes at most, but a shared melody/progression if my ear is serving me right.

And a little bit of history, courtesy of Wikipedia:

The song was first released by the folk group The Limeliters on their 1962 album Folk Matinee, under the title "To Everything There Is a Season". The Limeliters' version predated the release of Seeger's own version by several months. One of The Limeliter's backing musicians at this time was Jim McGuinn (aka Roger McGuinn), who would later work with folk singer Judy Collins, rearranging the song for her 1963 album, Judy Collins 3. Collins' recording of the song was retitled as "Turn! Turn! Turn! (To Everything There Is a Season)", a title that would be used intermittently by McGuinn's later band The Byrds, when they released a cover of the song in 1965.

Sometimes serendipity just gets right up in your face even though you, stupid old you, try looking every which way but where you should be looking.  I know, cause I'm talking about me.   In any case, this poem, from issue #128, just jumped right out, being the first poem of the issue.  Since the way I select these poems every week is one per issue working my way up (last week was #127, the week before etc.), this is true serendipity.

Now it's in your face.  Enjoy.


Bereaved
The first Christmas after:
an orange bristling with cloves,
the mandrill faces
in walnut halves left untouched—
the background, snowbanks
blank as absence

a new year--
the same nonsense
piled on nonsense

the turnings of the birds in flight, the Byrds in song, the clinamen swerves of the momentary molecules, issa's indelible poem all under the roof of Issa's Untidy Hut. pure pleasure! Don.

Donna, it's not often I get a comment in the form of a poem ... thanks very much, glad all this connected.

The Byrds version is the one I instantly recognize adn like quite a lot.

It is the iconic version, Charles - though not necessarily seasonal, I always think of it this time of year. I believe it was originally released in December, which is probably imprinted somewhere in the back of my old man brain.

The first version I heard of the song was Mary Hopkin's cover of it on the B side of her single of "Those Were the Days," which came out in 1968. Been a long time since I've listened to it -- I recall her rendition as a bit quieter that the Byrds', not so much of the bright jingle-jangle of McGuinn's 12-string, though very soulful and heartful and had a nice share of shimmer and sparkle.

(The fall of 1968, when Hopkin's record came out, was when I started writing poems at the green age of 14, and the A side of the record, "Those Were the Days," is forever resonant of that time for me. It was the first record I bought.)

Just within the past couple of weeks I saw on public T.V., on one of those "folk revival" shows they do from time to time, the video of Judy Collins and Pete Seeger that you link to here. I have to agree that the Byrds' version is the one, now, that arouses the deepest feeling in me. I love several of the other renditions too, including Seeger's (at least a couple of his recordings of it), and Mary Hopkin's. Among the many covers of the song, Wikipedia lists one by Tori Amos -- I'd like to track that one down. I expect she'd do nicely with it.

Lyle, it seems as amazing to me that I had never heard the Hopkin version of "Turn, Turn, Turn" as the fact that it was the first version you heard.

This is the best version of Those Were the Days I could find - interestingly embedded or mashed up with some poignant Edward Hopper paintings.

Tenzing, thanks for the Hopkin version of Turn and you are welcome.