I Bet You Look Good on the Dancefloor: Issa's Sunday Service, #106 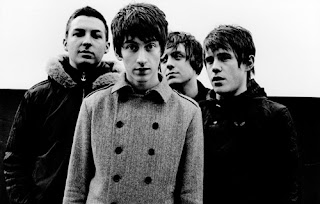 This is a day for rocking out, if delayed by a week.  Here's the 2nd appearance of the pop/rock band with as many hooks per album as your average fly fisherwoman has in her tackle box: the Arctic Monkeys.  At first listening, it would seem there is an allusion to Orwell's "1984" but, upon closer inspection, this seems spurious - I'm not remembering too many robots in that lit classic, especially dancing to electro-pop.  However, as I was about to abandon all hope, up popped the line "Oh, there ain't no love, no Montagues or Capulets" ... and, though this may seem a bit like "Newsflash: Generalissimo Francisco Franco, Still Dead," it'll do.

So, what about these robots and electro-pop and dance floors?  Well, maybe it's not a  lit allusion in the Arctic Monkey's song,  but perhaps pop citing pop:


This week's poems come from Lilliput Review, #87, April 1997.  They came back to back on pages 5 and 6 of this issue and have an interesting kinship.  Enjoy.


Dad
He's the one told me
"Never write your name
in the sand; the sea
will come and take it away
and what would we call you
after that

my dead mother--
every time I see the ocean
every time..

Yes, indeed, Jim, it is very, very hard to look away from those shoulder pads.

Almost obscures how incredibly good the performance is.

Glad you liked the words.

Don, I reviewed "Past all Traps" on my blog. Just put it up. also did a review on Goodreads. Good stuff.

Very kind, indeed, Charles. Thank you very much. I'll pass your thoughts on to folks.