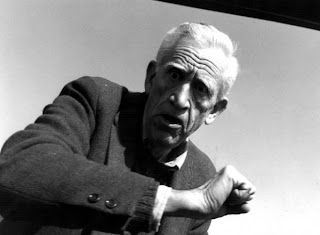 Jerry
For this week's Sunday Service selection there is a little imaginative ditty by Sarah Slean about a sort of intimate meet and greet with an infamous reclusive celebrity, now deceased.  His last published story, "Hapworth 16, 1924," has never appeared in book form and, it would seem, the New Yorker is utilizing its notoriety to solicit subscriptions, since its only publication was in its pages back in June of 1965.

Of course, it may be found on the net with a minimum effort, if a more than minimum amount of illegality.  So it goes, as some other famous dead guy said.

So who is this Sarah Slean?  Well, a major independent Canadian artist with more than a little Tori Amos influence.  This particular tune was recorded for her debut EP Universe at the extremely young age of 19.

To reach into even more, for me, unfamiliar territory, the following is a YouTube video entitled "J. D. Salinger," scored to a song entitled "Mad World," a cover of a Tears for Fears song here performed by Gary Jules.    There are lots of things in this world that I don't understand and that's a good thing.  There is something very moving, almost tender, about the juxtaposition of song and image here. Check it out:

And, because I would never dream of disappointing 80s aficionados, here is the original "Mad World:"


Finally, of course, someone has done the Hitler Finds Out Salinger is Dead "Downfall" meme thingamabob. You have to turn on the cc captions in the lower right corner for the English "translation" and they do go by a bit fast.  The Salinger haiku does get a nod and so, sacrilegious, offensive, or just plain juvenile, it's in for a penny, in for a pound.


The little girl on the plane
Who turned her doll’s head around
To look at me.


This week's feature poem shows how a brief work can perfectly capture a moment - when I use the word sensual to describe it, it is no exaggeration.  Originally it appeared in #85 of Lilliput Review back in 1997.  As far as I can ascertain, it's the first poem from that issue I've featured and I thought I'd covered each issue at least once.

Cutting
My father leans close
to my ear, a root beer
barrel rattling over
back teeth, he fumbles
against the rust clasp
on a blue plastic case,
scissors and black combs
within clear pockets


giving her dolls
a good talking-to...
the child

Wow, those are some esoteric connections. I'm quite lost! :)

I'm in, too. Tender and tender that Gary Jules cover "Mad World" love (and a favorite song). And a disorienting haiku by J. D. Salinger to boot!

Thanks, Donna ... appreciate that.

In addition, one of the catch phrases that Seymour, the narrator of Hapworth 16, 1924 uses repeatedly in the story:

Which I unconsciously used here.