The American Haibun by Donna Fleischer 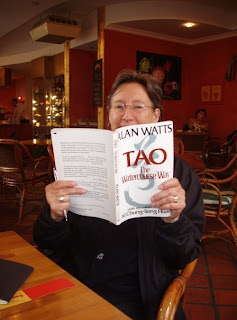 Donna Fleischer
I've spent a lot of time avoiding haibun.  That's right, I have my reasons.  In order to counter this particular bias, I am going to reprint a short article on American haibun by Donna Fleischer, followed by an example of one of Donna's own.

Donna's opinions are, of course, her own, but they wouldn't be here if I didn't have the greatest respect for them.

The American Haibun : Donna Fleischer (© 2008)
My ongoing work with haiku, begun in the nineties, led me to the
Japanese haibun, an unusual blend of prose and haiku, somewhat
autobiographical, and relatively new in the hands of American
writers.The first haibun are found in Matsuo Bashō’s (1644 –
1694) travel diaries in which he recorded his outer and inner
journeys on foot throughout 17th century Japan, of which, Oku
no Hosomichi, or Narrow Road to the Interior, is the best known.

To illustrate, I would like to borrow that famous frog from Bashō’s
haiku in a translation from the Japanese by R. H. Blyth:

The old pond:
A frog jumps in, —
The sound of the water.

Let’s say that hearing a frog jump into a pond evokes feeling, and
that the sound and feeling fold into one another as a gestalt, a
whole that is greater than the constituent feeling and sense that
came before it, and now to be experienced as revelatory — a
generalized state of heightened awareness, or bliss.

In a swerve to postmodernism, I invoke the French Surrealist
writer and artist, André Breton (1896 – 1966), who spoke of the
point sublime, a writing site where unlike things meet one another,
create instantaneous juxtapositions, which best of all engender
some sort of pleasure, only then to careen out of focus and logic.
The haibun form is just such a site.

A haibun typically could begin with one or several poetically
charged prose paragraphs that make palpable, once more, the
interplay of something perceived and something felt. This
description in turn deepens into yet a second form, the haiku,
that astonishes with a direct, vivid, and almost artless experience
of the natural and imaginative realms from which it arises. The
haiku is a synergistic leap from the poetic prose environment
which sets it up and to which it indirectly relates.

In form and content the composition of a haiku is a practice in
restraint. One wants to notice the ordinary in life, and
accordingly, to minimize the use of literary devices such as
rhyme or metaphor for the sake of creating an implicit poetic
experience of mystery and transience. The more or less eleven
English syllables or seventeen Japanese onji — the duration of
a breath — allow for the silences, too. A season word or
suggestion involves the senses and so anchors one in the
concrete. Eventually images enlivened by feeling attain a depth
of experience and insight. A frog jumps into the water, a haiku
bubbles up.

Find scholarly work on the hokku, the forerunner of haiku, online at http://hokku.wordpress.com/ .

English translations of Japanese haibun include:


Narrow Road to the Interior, Matsuo Bashō (1689) — Each of the translations by Cid Corman and Sam Hamill, while quite different from one another, are excellent.

We find our way, Betty, and I, to her beloved friends’ doorstep in
Neeberg, a German village of 30 on the Baltic Sea island of
Usedom. Once the summer home to Russian czars, German
kaisers. Today Ruth and Werner, Tabea, ten, and four-year-old
rambunctious Joram greet us in English and soccer scores. My
first morning after sharing chocolate muesli I wander far afield
in poppies with the drowned poet Paul Celan, writing this in my
head. Time in waves; wild blackberry paths to the sea; East
Frisian black tea with brown rum and a sugar cube; fish at night,
netted each morning from the Baltic near our door by the village
fisherman (also the mayor, real estate agent, emergency medic,
and reporter), born, grown up, and still in his place


Treks on foot skirting deep, loamy furrows and rootstocks,
gleeful, me and Moritz (elegant, like his neuroscience theories),
from one end of town to another with far-ranging conversation
and pockets of silence. Getting to know an other — hey! there’s
Tom, the mayor’s sea-wizened black-and-white cat, looking to
us and out at sea. I recite Bob Arnold’s poem SURE to him. He
seems to relate


Convergences for dinner, stories, laughter; new friends, Moritz,
of course, and Bettina, a psychoanalyst; more poetry, running out
of wine, fireplace ablaze, and politics of an unforgettable campaign
year, 2008, these Germans reassured in Barack Obama, in
America

Flying home. Over Germany, England, Ireland, the Atlantic. The
world and our lives with it so vast and collapsible.


Parked cars creak in the heat.  Old men drunks
astumble with paper bags.  O America you're on
strike!  Telephone poles go on for blocks.  AT&T
and the Associated Press and the FBI and me.
Nice trees flutter in the breeze.  It's a lazy
hazy day don't ya know.  Bugs zoom around and my
heart is a butterfly in love.  The sun moves
slowly across the sky concealed above the white
clouds.  Now the trees crowd round the
apartment!  The melancholy of the day reflects
on the white walls.  O lotus on the pond above
the water!  in the world yet not really of it!

in my sake cup
down the hatch!
the Milky Way

PS  Get 2 free issues    Get 2 more free issues     Lillie poem archive
Send a single haiku for the Wednesday Haiku feature.  Here's how.
Go to the LitRock web site for a list of all 104 songs

I've heard the term but wasn't really very familiar with it. Thanks for the explanation.

You are welcome, Charles.

Glad to hear that the article is helpful. When asked once to define the Tao, Alan Watts said: "The Tao? It's simply inconceivable". And so perhaps with all things, some, like the haibun, more so!

Many thanks for giving the haibun its due.

Donna, a real pleasure to share your wisdom with others.

When I do readings I'm often struck by how I've developed stories to introduce these tiny ten syllable poems. I work very hard to pare these intros down for the listeners to their essence. Like little haiku to introduce little haiku ...

Perhaps, I should take up haibun. Then I won't have to explain the explanation ...

Hi Don, I'm really glad you did this post on haibun. If your readers wish to see some good haibun they can go to the online magazines, Haibun Today and Contemporary Haibun Online. The editors there are literally keeping English haibun alive and they are doing good work. I've been working in haibun for a just a little over a year. Writing it is exciting and challenging. I came to it as a result of reading Basho's "Journey to the Interior," trans. Sam Hamill. I'd been struggling to write about a boat journey my husband and I too, trying to make a novel out of it. Once I tried the haibun, I found haibun to be the perfect way of recording my reflections about the trip and about life. It's really funny how that works, how one needs to find the right container for their thoughts. The right shape. From the haibun, I've moved on to prose poems, but I still write haibun and find them more challenging, since the haiku and prose sections must be effectively linked. The whole experience of writing haibun has taught me a lot. Very nice work, Donna.

"It's really funny how that works, how one needs to find the right container for their thoughts. The right shape."

And, if moving on to prose poems, check out today's post on the Sunday Service, which instructs one on how to sing a prose poem (in French).

Don, "It's really funny how that works, how one needs to find the right container for their thoughts. The right shape." These words of Theresa's were a bulls'-eye for me as well.

Theresa, your word "effectively" for linking haiku and prose or poetic prose, or even prose poetry is the key to it all. Like a dance, a clinamen swerve of molecules . . . . Also, thanks for sharing those online haibun sources — Contemporary Haibun Online will be featuring one of my haibun next month. Grateful for your kind words and joining the discussion!

Congrats on the upcoming publication of your haibun, Donna. Look forward to reading it.

And here's the link I missed for Contemporary Haiku Online.