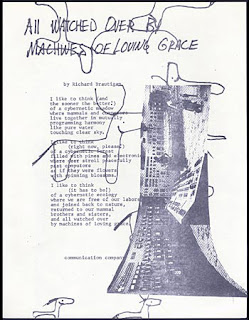 There is a new promising BBC series that takes its name from Richard Brautigan's famous poem: "All Watched Over by Machines of Loving Grace."   As the tagline for the series goes, it is a "series of films about how humans have been colonised by the machines they have built. Although we don't realise it, the way we see everything in the world today is through the eyes of the computers."  Here is the amazing Brautigan poem, first published in 1967, followed by an interesting trailer for the new series.

All Watched Over by Machines of Loving Grace

I'd like to think (and
the sooner the better!)
of a cybernetic meadow
where mammals and computers
live together in mutually
programming harmony
like pure water
touching clear sky.

I like to think
(right now, please!)
of a cybernetic forest
filled with pines and electronics
where deer stroll peacefully
past computers
as if they were flowers
with spinning blossoms.

I like to think
(it has to be!)
of a cybernetic ecology
where we are free of our labors
and joined back to nature,
returned to our mammal brothers and sisters,
and all watched over
by machines of loving grace.

I'm still busy recovering literally and psychologically from last week's reading and book launch for Past All Traps.  While I catch up, here are two haiku by Allen Ginsberg from "Four Haiku," which originally appeared in his Journals: Early Fifties Early Sixties:

I didn't know the names
of the flowers—now
my garden is gone.

Looking over my shoulder
my behind is covered
with cherry blossoms.

This week's feature poem comes from Lilliput Review #160, November 2007.  I myself walk through a city landscape every day, see exactly what is described in this poem everyday, and I didn't write this poem.


two wings per pigeon
and this is where they gather
on a wire
in the city
Ah, what do I know

at my gate
the artless pigeon too
sings "It's spring!"

best,
Don
PS  Get 2 free issues    Get 2 more free issues     Lillie poem archive
Send a single haiku for the Wednesday Haiku feature.  Here's how.
Go to the LitRock web site for a list of all 106 songs

wow - it is great to read that Richard Brautigan poem. yeah, the trailer... looks like a strange and normal-as-usual oddity series... eerie.

...and you say you're recovering with all that running through your skull? good recovery energy on you - machines or not.

altho i must also say - excellent poem choices all the way through - recovery just may be possible with this kind of reading.

Very glad to say that the recovery prognosis is going along well - thanks for the kind words, very much appreciated.

I'm now wondering what a cybernetic meadow would look like.

Charles, I think we are a lot closer to knowing than RB was 50 years ago when he wrote this ...

here is the system that I operated in 1961-62
http://www-03.ibm.com/ibm/history/exhibits/mainframe/mainframe_PP1401.html

for Main Navy Rickover was my boss...

as for Richard Brautigan I met him in a saloon once
when I was hitch-hiking around. He bought me a beer

this was before I dropped out

was thartRichard blew his brains out ! Left a note

(that I think it was his daughter who found it):
"Messy, isn't it?"


also came to find out
that
many many many of the people who I knew 7 admired, read and corresponded with were also deaD!

so, I wrote this "shortie"

searching the stars
for intelligent life
damn little of it here

Bowing east,
toward you,
& all,
kokkie-san

phunny as a crutch!

those last punch-cards and those hanging chards
(in Florida) not too long ago
got us into the mess that we are now in.

I'm now waiting for The Computer that will 'get me off'

I've always found this to be one of the most curious of Brautigan's poems. The BBC has an interesting take on it. What do you think, Don? What was B. saying about technology? He loved movies but hated TV. His imagination was uncommonly rich. Your Issa selections are stunning. Nice connection with the pigeons in Shawn's poem, too.