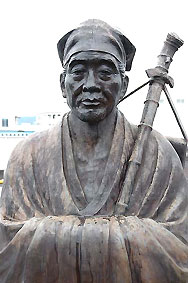 I've begun some background work for one of the fall sessions of  the 3 Poems Discussion Group, this one on Allen Ginsberg.  I have been reading all manner of poems, trying to see what would connect beyond the obvious, what might emphasize aspects of Allen's work sometimes overlooked, and it has been a real joy to immerse again in the work of one of the 20th century's great poets.

I ran across the poem Back on Times Square, Dreaming of Times Square and was immediately struck by its similarity in concept and title, to Bashō's poem, "Even in Kyoto ...," my favorite Bashō haiku, perhaps my fav haiku, period.   It's not really something for my purpose with the discussion group, but I thought regular readers of this blog would appreciate it.  First, let's start with Allen, then Bashō  :

Let some sad trumpeter stand
on the empty streets at dawn
and blow a silver chorus to the
the buildings of Times Square
memorial of ten years, at 5 A.M., with
the thin white moon just
visible
above the green & grooking McGraw
Hill offices
a cop walks by, but he's invisible
with his music

The Globe Hotel, Garver lay in
gray beds there and hunched his
back and cleaned his needles―
where I lay many nights on the nod
from his leftover bloody cottons
and dreamed of Blake's voice talking―
I was lonely,
hotel's vanished into a parking lot
And I'm back here―sitting on the streets
again―
The movies took our language, the
great red signs
A DOUBLE BILL OF GASSERS
Teen Age Nightmare
Hooligans of the Moon

Some old men are still alive, but
the old Junkies are gone―

We are a legend, invisible but
legendary, as prophesied


Even  in Kyoto—
hearing the cuckoo's cry—
I long for Kyoto.


Of course, Ginsberg's lament, way back in July of 1958, was just a first salvo of the attack which was to come on that the historic section of mid-town Manhattan.    The preeminent speculative fiction and Gay Studies scholar, Samuel Delany, documented the next phase and even that account was  pre the Disney-fication which would hose the whole place down and drive everyone away.

The link here is memory and Bashō somehow managed to transcend nostalgia by firmly grounding his poem in the moment.  Both poets are lamenting a previous life, but neither stoops to the maudlin or the overly sentimental.  Ginsberg, too, stays in the moment and there can really be no doubt that he wasn't nodding, in his inimitable way, to the classic haiku master. 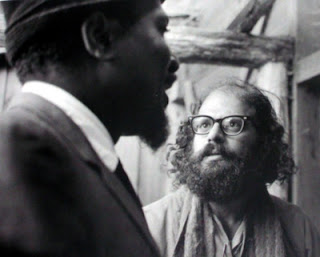 This week's feature poem comes from Lilliput Review, #161, in March 2008.   Peggy Heinrich is one of the poets whose contributions over the years I value very much.   Her wisdom, as in this little tanka, always brings a little light to a dark corner of mystery.

Ginsberg really captures the essence of the city. Makes me feel like I'd enjoy it myself, and that's despite the fact that I am a died in the wool country boy.

I just recently read A Blue Hand by Deborah Baker, published a couple of years ago by Penguin, an account of the travels of Ginsberg and Peter Orlovsky and Gary Snyder and Joanne Kyger in India in 1962 and 1963. Along the way it also touches on a number of other events of those times, and various other people connected with the story in all sorts of ways.

I know of the above poets, and the crowd they moved in, only from their poetry and other writing, and their reputations, and am in no position to gauge how accurate Baker's narrative is. She does footnote copiously, much of the material in the book based on correspondence between the various writers, and their journal writings. I found the book highly compelling, I flew through it in a few days.

She tells the story in a cinematic jumpcut manner, moving from one thread of narrative to another -- Ginsberg's anxiety over the relationships with the people in his life; Gregory Corso's haplessness in New York and San Francisco; the occasional encounters with the mysterious Hope Savage (who crossed paths with each of them here and there while on her own wideflung travels), the literary scene in Calcutta, a few of the many threads of Buddhist and Hindu spirituality and religious practice; various tanglings with local bureaucracies; and so on.

This while in the background loomed the confrontation between the U.S. and Russia over missiles in Cuba, and the sporadic military clashes breaking out along the border between India and China.

The Basho Kyoto haiku you've given here is a favorite of mine too.

Reminds me of the children's story Country Mouse, City Mouse. I'm the city mouse, you're the country mouse, Charles. Though Pittsburgh is literally surrounded by wilderness and you are so close to New Orleans.

Lots for us both to learn!

Lyle, thanks for the note on A Blue Hand. I've seen it any number of times at the library and it has been calling my name. Your overview makes it sound even more attractive.

I love Peggy's tanka. It's too rare to see someone--even a poet--putting wonder above "knowing."

That is the essence, Theresa - I love that one, too. Don