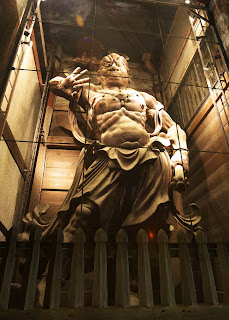 This is wonderfully odd song, recently suggested by a reader; somehow, I would love to hear someone arrange differently.  I know this is a bit of a sacrilege; after all it is Billy Bragg and Wilco - jeez, whaddya want already?  Of course, since this comes from the album Mermaid Avenue, which is made up of previously unreleased Woody Guthrie lyrics, it's not likely that anybody else will be rushing  to cover (re-cover?) this anytime soon.  Still and all, fine work all around and many thanks for the suggestion.

I share a birthday with Woody Guthrie: the 14th of July, Bastille Day, and that has always made me happy.  So has Woody.  First, Bob's classic tribute to Woody (no mistakes in that pickin' on this take) and then a real beaut by the man himself.


This week's featured poem comes from Lilliput Review, #78, March 1996.  It's one ambivalent little beauty by one of my favorite haiku poets, Patrick Sweeney (who has promised to leave a little packet for me under the bridge by the Mon - no mean feat, internationally speaking).   The Deva King of Issa's little number may be seen portrayed, sans wasps' nest, at the head of this post.  Enjoy.

The scent of lime ends at her wrist

the beehive dangles
from the Deva King's
wrist

Send a single haiku for the Wednesday Haiku feature.  Here's how.

this, Don, IS a VERY, VERY interesting connection for me this

"beehive dangles from her wrist" !
as

Stone Girl (who is also She Intrudes) almost always wore a Gung Bee bracelet as it "is my good luck charm" and , as far as I know, an ancient "beehive" stone good luck charm. ... and, as I did look it up has to do with the Heart chakra...

(never did use the image of this Bee Hive bracelet ...
or it s exactly meant of what it signifys )

your lead picture is one of the Deva Kings..

the King of the Deva Kings is Sakka ..

the imaginary is what tends to become real...

now to listen to that "odd song" and see what connections are extended towards !

Yeah, lots of people bore the responsibility for killing Jesus. There was no shortage of helping hands.

"the imaginary is what tends to become real..."

Well, there it is, Ed. I'm thinking perhaps the bee bracelet might find its way into future Stone Girl opus ...

At the conference, some interesting talk about Shinto from an academic, plus in relation to Issa. The roots of haiku in Shinto, the roots of all in Shinto ...

Glad you connected with the Guthrie, Charles.