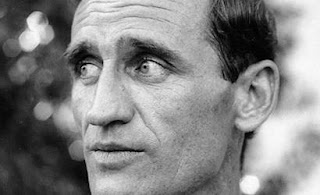 This is at least the fourth time Neal Cassady has made an appearance on Issa's Sunday Service (previously here, here, and here) and that says boatloads about lots of things (he also got a mention on the Sunday Service here, though the song wasn't about him).

For the second week in a row, I'm featuring a song by a group I hadn't known 10 days before. Weather Underground I somehow stumbled on, possibly on youtube, but how I couldn't say. They are obscure enough to not even have a bio on allmusic, just some cursory info on their self-released discs, When I Was a Soldier and Psalms & Shanties, the last being where "Neal Cassady" comes from.

I particularly like the pacing of this song. Which got me to thinking about the musical approach of each of the bands to their enigmatic subject - is their any relation between Aztec Two-Step, King Crimson, the Grateful Dead, and The Weather Underground, musically, in how they portray Mr. C.?

Here they are all together:

And, because serendipity is the grease that works the wheel of magic, after putting this together, I stumbled across this article in The Guardian about a famous photo which I was familiar with but had no idea was of Cassady.


calling down--
from deep in the well
an answer

- Don
PS  Get 2 free issues    Get 2 more free issues     Lillie poem archive
Send a single haiku for the Wednesday Haiku feature.  Here's how.
Go to the LitRock web site for a list of all 107 songs

Definitely never heard that one. Not that I remember.

Newish, independent group ... just beginning to get some exposure, Charles.