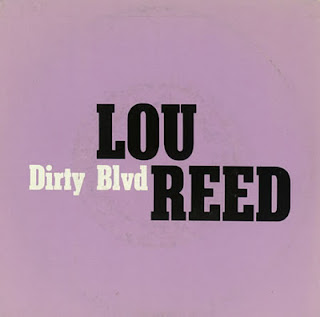 Perhaps it is appropriate, with the Occupy the World movement (including Sesame Street) in full swing, that this week's selection is Lou Reed's powerful "Dirty Blvd."  It is one of Lou's heavy narrative lyrics and he manages to turn Emma Lazarus "The New Colossus" on its head with a swift backhand:

Not like the brazen giant of Greek fame
With conquering limbs astride from land to land;
Here at our sea-washed, sunset gates shall stand
A mighty woman with a torch, whose flame
Is the imprisoned lightning, and her name
Mother of Exiles.  From her beacon-hand
Glows world-wide welcome; her mild eyes command
The air-bridged harbor that twin cities frame,
"Keep, ancient lands, your storied pomp!" cries she
With silent lips.  "Give me your tired, your poor,
Your huddled masses yearning to breathe free,
The wretched refuse of your teeming shore,
Send these, the homeless, tempest-tossed to me,
I lift my lamp beside the golden door!"

In addition to paraphrasing lines to deadly effect, Lou renames the famous Statue itself:

Give me your hungry, your tired,
your poor I'll piss on 'em
That's what the Statue of Bigotry says
Your poor huddled masses
Let's club 'em to death
And get it over with
and just dump 'em on the boulevard


Never one to take prisoners, Lou's perspective is every bit as relevant today in light of the recent nationwide protests as it was in 1989 when it first appeared on his dynamite New York album.  We think of this as an urban problem, but obviously its universality is becoming more and more apparent.

Here is a version of "Dirty Blvd.," along with "White Light, White Heat," done as a duet with David Bowie on the occasion of the later's 50th birthday.


This week's featured poem from the archive comes from Lilliput Review, #64, December 1964, which has been featured before here and here.   This is the 12th poem featured from that issue and it's a good one.


When Asked To Name The Seven
Most Beautiful Words. . .

red clouds--
above the butterfly too
autumn dusk

I can't play this one because I recently had to disable all my plugins. However, I must admit that I am not a Lou Reed fan. I don't know about his lyrics but the one song I identify with him is "walk on the wild side," which is probably the song I dislike the most in the modern rock/pop era.

Charles, yes, I remember now you lack of affection for Lou. Guess the disabling of plug-ins worked this time, but I hope you can get them back for other things you need.

Really enjoyed the Reed/Bowie video. Though pretty soon their audience is going to look like one of those old fat audiences for Peter Paul and Mary reunions on PBS pledge drives. (Speaking as someone who is 55 and fat.)

pick "it" up with ECSTASY

(speaking as someone who is 70 and skinny & never could stand Peter, Paul & Mary !)

Which may be why Lou has taken up with Metallica for his brand new album, Lulu ... to make sure us old farts in the back row aren't nodding off!

(Kokkie-san, check out the album cover and groove on the Louise Brooks, Marlene Dietrich etc connections via above link - right up your street).

couldn't (yet) find the link to Louise Brooks & etc I got "way laid" (a-gain via those films of:

that "greatest rock & roll band of ALL times coin "Walk on the Wild Side"..

as for Louise Brooks ?

for those who "dig" such-as-it -is "stuff

and that American Spiritual they do: White Light !!!!!

Here's some back ground.

This is even better.

Even better than that, the chapbooks are in the mail today!

So awesome. I need to hang out on your blog more.

In case you needed a scorecard.