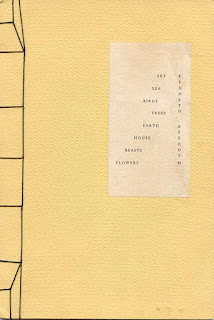 I ran across this beautiful little Kenneth Rexroth book, Sky Sea Birds Trees Earth House Beast Flowers, in a local Pittsburgh used and rare bookshop, Caliban. The book comes from Unicorn Press, which I've written about before previously in a review of Hyakunin Isshu: 100 Poems by 100 Poets, back in April of this year. You can find plenty of info on this, one of America's finest small presses, back in that post, so I'll skip the background here.

This particular volume was published in 1971, is 1 of 375 trade copies and contains 11 poems with 13 pieces of art, all done by Rexroth himself. The poems, as well as the brushwork, are all Eastern inflected.


Slowly the moon rises
Over the quiet sea.
Slowly the face of my beloved
Forms in my mind.


The parallel feel of the two sets of two lines has the sensibility of haiku, minus the denouement. The comparison of memory to nature is an interesting one; there seems also to be an implied parallel as to time duration of the two events. Any poem that brings the human into nature, either in contrast or, even better, in harmony, has my close attention, as does this one.


Spring puddles give way
To young grass.
In the garden,
Willow catkins
Change to singing birds.


This might be easily characterized as waka, though the form is more specifically reminiscent of tanka, without the overt romantic element. Whatever it is called is not particularly relevant, except perhaps for the scholar. Here we are completely immersed in nature, presented with examples of the myriad changes which happen right before our eyes and yet so often go unseen. What I most admire here is that Rexroth has captured the miraculous quality of these changes by making them feel almost magical.

Of course that is just what it is, a miracle, a bit of natural magic, right before our eyes, which is seen so many times without seeing that it has become "ordinary" enough to ignore

A dawn in a tree of birds.
Another,
And then another.


This may be my favorite poem of the collection. Is it a haiku? Seen from one angle, not really, from another most definitely. How so? If seen as a series of days, it is closer in spirit to the previous poem, which takes place over a long period of time, hence not a haiku (if capturing a single moment is part of your haiku requirement). Seen from the other side, however, this could be a series of immediate moments, contiguous, taking place in mere seconds, as the rising light first hits one bird, than another, than another.

In fact, it doesn't have to be light at all directly hitting the tree - it could be the light breaking on the horizon and each individual bird's response, one after the other after the other, in song.


Past midnight,
In the dark,
Under the winter stars,
Tendrils of ice
Creep through the duckweed.


This is another special poem, tanka-esque in form, which thrusts a human right in the middle of natural things. This poem has a bit of an ominous quality; it is past midnight, dark without moonlight, and our sense of hearing allows us to hear something creeping through the duckweed. Though the hearer realizes it is ice creeping and not some predator, still the tone of "creep" feels foreboding. The beauty here is that, though not a sentient being in our usual sense of understanding, ice does creep, so Rexroth has not committed any anthropomorphic hocus-pocus, something which would immediately turn me off.

In addition, ice creeping may have a truly ominous quality for one exposed to the elements without proper clothing and food. It may be winter that is doing the creeping, which may be something properly feared.

The years pass.
The generations
Of birds pass too.
You must watch carefully.
The same towhees and jays
Seem to have been in the same
Places
To thousands of generations
Of men.


This fifth poem captures some of the aspects of the poems already noted, particularly the passage of time. Thousands of generations of men pass through this poem, yet the poet admonishes his readers to watch carefully in the moment to see all time pass before you, a perfect conflation of eternity and the now.

One might almost say eternity in a moment: satori.

Fine, fine, fine stuff. Copies of this amazing little hand-sewn chapbook can be had much cheaper than I paid for it ($15) or you can pay a lot more. It's only money and this is only poetry (and art).

I'm thinking either way it's a bargain.  I know I got off cheap. 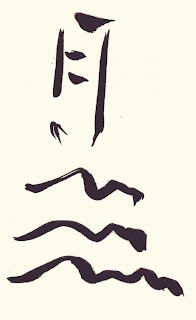 This week's poem from the Lilliput archive comes from issue #102, January 1999.    Once again Alan Catlin's painterly eye is in evidence, a master at work.


looking younger than me
the scarecrow casts
his shadow

This book looks outstanding. I'll check it out.

Quite, quite good, Charles.