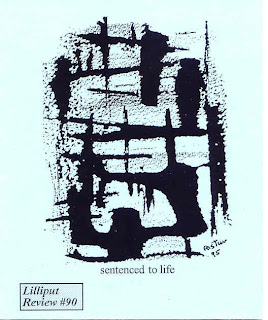 I'm currently working on a couple of projects concerning Emily Dickinson which I'll probably be discussing in future postings. For the moment, for those who didn't see/hear it, I'd like to refer you to The Writer's Almanac for yesterday's rendition of "I shall keep singing!", which, like much of the best of her work, seems so simplistic on the surface but resonates like all get-out.

Over the past year and into the foreseeable future, I have and will be continuing to publish Dennis Maloney's translations of the work of my favorite tanka poet, Yosano Akiko. At least four new poems are forthcoming in the next two issues of Lilliput. In the meantime, here are a couple of older translations by Glenn Hughes and Yozan T. Iwasaki:


There are numberless steps
Up to my heart.
He climbed perhaps two or three.

Like my heart,
Which is waiting for you,
This bouquet of flowers will wither
Before tonight has passed.

The white iris
And the purple iris
Grow side by side in the pond,
Yet never open their hearts
To each other.

I've been perusing Basho and His Interpreters by Makoto Ueda, one of the Near Perfect Books of Poems list; the list has now grown to 28 items, with lots of folks taking advantage of the two free issues offer. In addition to being an all new translation of Basho's work, the poems are accompanied by extensive notes and commentaries which are very helpful in bridging the historical and cultural gaps for Westerners. Here are a few:

night . . . silently
in the moonlight, a worm
digs into a chestnut

in the seasonal rain
the crane's legs
have become shorter

Finally, before getting to this week's archive issue of Lillie, I'd like to mention that their is an excellent article/interview on/with Mary Oliver, in the Block Island Times. When asked to name her favorite poets, she said "Whitman, Whitman, Whitman!" I knew there was a reason I liked her: Whitman was my choice on the Near Perfect Books of Poems list.

This week's archive issue is #90, from July 1997, with a great cover by the late, very much missed Harland Ristau. Here's a couple of little gems that opened that issue:


the way
is not
the map

And, to close out, by the queen of the small press:


I Don't Want To Move


Note: If you would like to receive the two current issues of Lilliput Review free, just make a suggestion at the Near Perfect Books page.

Thanks for the Mary Oliver lead. In the Oval Office!?!

You are welcome. Mary Oliver has grown on me over the last two years. I've taught a couple of lifelong learners poetry appreciation sessions and her work is always amongst the ones that get the best reaction.

In case you haven't seen it, I did a review of her new books. It was the first post of May (last on the list on the sidebar).