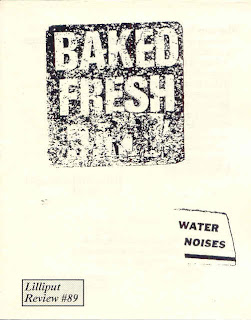 Cover by John Bennett
Ran across a number of interesting pieces this week, including a video of Robert Hass reading Issa haiku at the Geraldine Dodge Poetry Festival. This short reading (less than 2 minutes) of 9 poems perfectly captures the playfulness and humor that endears Issa to so many. In addition, it a a model of how to perform haiku, no easy task. It misses the immense sadness of Issa, the other dimension that contributes to his immortality, but that was not the point of this reading as may be readily seen. This reading is part of a larger series entitled Poetry Everywhere, which includes such poets as Charles Simic, Lucille Clifton, Sharon Olds, and Robert Frost.

Fine, fine stuff. I've made it a permanent link in the Issa section of the sidebar.

In Monday's post, I mentioned The Blog of Henry David Thoreau; here is another gem from that journal, entitled Grinding Away.

Mary Karr has recently taken over the Poet's Choice column in the Washington Post and it has taken me a little time to warm up to her style and tastes. A recent post in which she began by admitting she never liked Emily Dickinson did the trick; she mentioned the anecdote that has long been making the rounds that you can sing almost any Dickinson poem to the tune of "The Yellow Rose of Texas." Try it with Because I could not stop for Death.

Her latest column takes on something I just can 't abide: baseball haiku. It's not the fault of the haiku; I can't stand baseball fiction, baseball short stories etc. (n.b.: I am a big baseball fan). However, in her column covering the recent publication of Baseball Haiku: American and Japanese Haiku and Senryu on Baseball, she quotes the work of George Swede, among others. Congratulations to George, one of our finest purveyors of the haiku form. He ably proves why in the two poems quoted in the article:


Now, there are a couple of baseball haiku that even I like. The first is simply perfect and the use of the single word "evening" in the second has me on my back waiting for my tummy to be scratched (and you thought you could never really please an editor).

This week's selection of poems from a past issue of Lilliput Review takes us back to #89, July 1997. As the summer season begins, here are a couple of seasonal works from back then:

A poem is ocean -
without shore.


And two by the late Joseph Semenovich:

i present
whoever i am
both subject and object

the verb
he drowned
himself in


Note: If you would like to receive the two current issues of Lilliput Review free (or have your current subscription extended two issues), just make a suggestion of a title or titles for the Near Perfect Books page.

Where can I find more poems by the late Joseph Semenovich?

I actually like those Baseball haiku as well. As long as they don't involve the game I'd probably be fine with them. I really don't care for baseball, although I enjoyed watching it when my son Josh played little league.

I've never heard haiku read aloud before, and hearing Robert Hass do it is amazing. He's got perfect tone and inflection for it. Thanks Don!

Now there is a great question. While preparing this post, I scoured the net looking for some sort of tribute or even a small collection of poems without much luck. There were tables of contents that listed his work in various small magazines, some of which may still be available.

I found these poems (the last one is from my own Lillie archive:

He had poems in Lillie #'s 81, 86, 89, 93, & 97. The work I got from him was always top shelf. As is the way in the small press, I sent
him off a packet and it returned stamped "deceased." Just hit me like a ton of bricks. I didn't know him well, just the usual exchange but I really liked his work and to hear from the post office, well, it was quite disheartening.

I have no idea who he was. I just conjure an image of someone working a day job, typing away at night, sending out his thoughts and prayers in poems, perhaps the only way he really could share them.

PS #97 reprinted 3 poems I'd previously printed ... it was dedicated to his memory, as I had just heard of his passing. I've you a copy of this via email also.

Yeah, the reason I probably liked the ones I did was because they weren't about baseball ...

Hass did an amazing job. I've seen others read haiku so seriously and, because, they were so self conscious about whether it "got through" they would repeat it, solemnly 3 or more times.

Which underlines the point of direct speech ... haiku like any other great poetry (for me) is pointing not telling. Issa says this and you laugh.

Poem, laughter, done (or, for the truly great stuff, you actually remember it later and laugh again, as if for the first time ...).

I note with unbecoming pride that my alma mater, Reed College, prepared a short video of haiku prepared by current students and welcoming incoming freshers. The alumni newsletter invited us to offer some of our own. This should be fun.

Sounds very interesting ... keep me posted as to how the project goes and maybe I'll be able to link up to it so you can get some wider exposure when you're done.