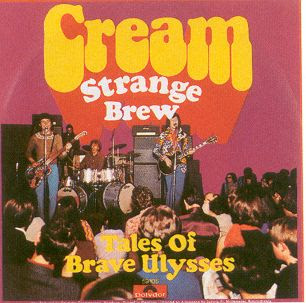 This week's LitRock tune on Issa's Sunday Service goes all the way back to the early days of the renowned Greek bard, Homer. Notably, this was a song not replicated in Cream's recent dinosaur reunion. Here's Wikipedia's take on the song's inception:

The lyrics were written by Martin Sharp on the back of a beer mat, which he gave to Eric Clapton after a chance meeting. These lyrics were put to a melody inspired by Judy Collins' version of Leonard Cohen's "Suzanne" and chords inspired by The Lovin' Spoonful's "Summer in the City".

This is all news to me and I will let a sharper ear than mine ferret out the veracity or lack thereof here. I had always assumed the lyrics were by Peter Brown who, along with Keith Reid and Robert Hunter (who co-wrote all but one of the songs on the new Dylan album, Together Through Life, which I'm listening to as I type), are among rock's premier, if relatively unrecognized, classic lyricists. Sharp, who was Clapton's artist flatmate at the time, also designed the renowned cover for the album, Disraeli Gears, on which "Tales of Brave Ulysses" appeared.

The featured poem this week, as we count up from issue #1, is from Lilliput Review #10, in February 1990. Who knew a toad and a bucket of salt was so limiting? Enjoy.


Mercy?
Do you ask for mercy?

You will be given a toad
and a bucket of salt,
and nothing more.

Do not ask for more.
There is none.


evening cool--
the toad who comes out
I call "Lucky"

Suzanne was a real person

that girl on the cover of that white album near the window of a stone white-washed Greek house well I've always thought that she was "Suzanne" but not absolutely sure.

there were OH SO MANY

oh my I hate this being old shit! I should have
done more
and written more down..

hey a thought : the 'real' Elvis IS Little Richard!

The lit rock series is excellent, this selection especially. And a huge bonus: comments by Ed Baker.

Read somewhere that Ed is a fan of Popa Chubby, purveyor of gritty New York blues. Might I suggest a video of Popa Chubby on the Hut?

Still have the old LP of Disreali Gears. Gotta go dig it out now.

I'm a cream fan myself.


BOOTY and The Beast!

"Sweet Goddess of Love and Beer"

"Palace of the King"

(Papa's version of) "Stoop Down Baby

Ed, forever in our minds walking away the Roy Orbison song:

If thats the way it must be, ok
I guess Ill go on home, its late
Therell be tomorrow night

7th sense, oh yeah, you got us all tearing up now!

Glad you are digging it, Jim, ya blind sided me with "Poppa Chubby" I'm digging through some vids and can say I've seen the future and it will posted here sometime soon enough ...

Ed, see the Poppa has done some Leonard Cohen, so, Jim, you've completed the little circle we are dancin' here ... Hallefuckinlujah!


Greg, glad you liked the Castleman and, Charles, finally something with a little bottom, eh?

speaking of Popa Chubby and circles

takin a break from being famous Fay and I were in this bookstore and they were plaing something I had neveer heard the likes of befor..

so they are playing that first cut on the cd..."its like this'
and the song is "SHOW BIZ KIDS"

I got hooked again the Pirates cd etc

so... onto The Magazine c-d and