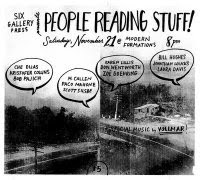 I promised a follow-up to last week's post on The Acorn Book of Contemporary Haiku, edited by Lucien Stryk and Kevin Bailey. There was just too much great work to cover in one go round. The second half of this volume, which runs 170 plus pages with anywhere from 1 to 5 haiku per page, is if anything stronger than the first half. All types of contemporary haiku are considered, though there is a definite leaning toward brevity. Being a British publication, there is a decided slant to the Brits, plus lots of folks from the continent, from Asia and poems in translation. Here's a second selection:


whisper of wind
--leaves brushing leaves
--as they fall

imprinted
in each new Aspen leaf
--the tree


The blackbird as usual
when I was about to
buttonhole God

In the plain vase
the forgotten sunflowers
turn to light

The high mountains.
Sometimes, the echoless
sound of the cow bells...


Gazing at the moon
one realizes that she
has come quite a way...

A hand from the water.
Circles out.

To find another stills
and clarifies the world.


Old vessel
of blue we hold to

to the end where all
we've emptied fills.


A moon to read by.
Gulls trail in

a line of broken shadows.
Every tide a text.

generations buried
from tombstone to tombstone
the dragonfly


from The Haiku Dictionary by Philip McCall


A cracked soap
preserves the last
dirt from your hands

With their voices
cicadas create the shape
of a big tree

There is much here to admire and to admire deeply. Jean Jorgensen gives us the micro in one poem, the macro in the next - read together it makes one dizzy. Tamaki Makoto, as so many poets here, points to nature for answers. Leo Lavery, I know that blackbird, he is presently on a wire outside my garret, attempting to distract me, with some success, from you. Bells that don't echo, flowers that know better than you, and that old devil moon all show off Daniel Richard's deft touch. Alexis Lykiard is dipping into an abbreviated version of old Bashô's pond.

There is something so mysterious about Peter Dent's 4-line haiku I feel that I've gone to church.

Kenneth Tanemura shows explicitly why the traditional haiku, like blues music, will never die. The limited forms are the most infinite! I'm right back in church, perhaps temple this time, with Ikuyo Yoshimura's ku rippling like wind on water. Philip McCall has a splendid notion with his Haiku Dictionary. Nick Pearson's powerful 3 lines catch in the back of the throat.

Tsunehiko Hoshimo's 2 poems have a purity of image that resound through all time and space, simply the beauty of life itself. Finally, I've said nothing of Geoffrey Daniel's poem because it resides in the exact space where all good poetry, haiku included, comes from and to whence it returns.

Lucien Stryk and Kevin Bailey are to be commended for one of the premier anthology's of contemporary haiku to be published. Someone must simply get this work back into print. Since it has, in fact, never been printed in the US to my knowledge, someone out there needs to pick it up and run. It is too good to languish in obscurity.


One of the reasons I'm behind in just about everything is the prep I've been doing for a Six Gallery Press reading this Saturday night at the Modern Formations Gallery. It will be a mix of Lilliput and my own work just as the reading back in August was (here are the Lilliput poems from that reading). I'll be doing all new poems, with the exception of one of my own. Six Gallery plans to publish a collection of my work some time in the not to distant future, as well as a 20th anniversary retrospective Lilliput collection. I'll keep you posted.

Bashô Haiku contest folks have showed great patience awaiting word. It's all on simmer and I will returning my full attention to it again next week, so thanks for that patience. I'm on schedule to make announcements in the first week of December, with the anthology chapbook slated to be published sometime around mid year 2010.


This week's featured back issue of Lilliput Review is #151, from July 2006. Here's a couple of little beauties to put that spring back in your step (or knock the wind out of your sails, depending on what you need). Enjoy.

Remember this poem? its simple
rooms? its window full of trees? the white

gable which you loved about this poem,
how its lone triangel seemed to encompass
all humanity? and the spiky yellow sun

exploding somewhere outside the poem?

Of course you do. In fact you're reciting it
right now, standing on one foot in a room
of a different poem.


When we build bridges
we forget where rivers flow from
and to.


And another fine translation of Issa by David G. Lanoue:

big bridge--
the hunter is followed
by a goose

Good stuff. That is a lot of haiku. Almost a "mammoth" book of haiku.

Came here for some quick haiku hits and found instead a deep well, a feast, an avalanche. Will take more than a glance to see what's here.

The word "not" in the Makoto piece is one powerful note.

Thanks, Don, for this selection. And have fun at the reading.

It must be me. I just can’t get my mind around the concept of Haiku as Art. I do appreciate the concept of more is less and consider culling the sine qua non of Art but..

If anything is more amendable to random word generation, I would put the haiku at the top of the list. Just a few monkeys in a day could produce hundreds.

As a quaint and curious endeavor the haiku has its place, especially if it is accompanied by a visual representation, but to spew out such in mass is excessively feckless.

Charles, hope something grabs you out of this mammoth selection ...

Jim, thanks much, glad this goes as deep for you as it does me ... I was amazed at all the wonderful work. Heading to the reading in a couple of hours - having the usual pre-performance willies which is good, that's were the energy comes from. Thanks for the good wishes.

robert d, many thanks for your comments - most folks who feel this way would just move on and not bother saying what they think.

It's not just you. There are many folks who feel this way. There is an awful lot of things out and around that are passing for haiku these days and really have jaded folks to the form.

Yet, simply put, it's not for everyone. I could talk philosophy, psychology, and resonance till my face was is as blue as Krishna's and it wouldn't matter - if it doesn't click, it doesn't and that's that.