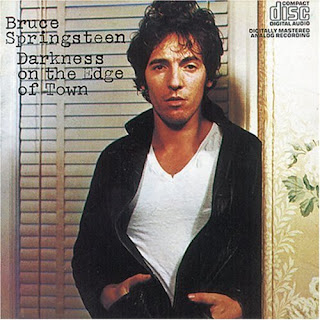 Today is the birthday of Steven (Little Steven) Van Zandt, guitar player in Bruce Springsteen's E Street Band, which gives me the opportunity to delve into the deep cut side of things in the Bruce catalog. This song comes from Darkness on the Edge of Town and isn't something you hear everyday, possibly because of its execution, possibly because free form radio is virtually dead, possibly because of its thematic similarity to other cuts from the band: fathers and sons, empty rooms, biblical resonance, shattered dreams, sin, redemption, and love gone bad. Image-wise, water, blood, and cars are never far from any song by the Boss. Yet, when isolated and listened to, this song perfectly encapsulates so many of Springsteen's works. For my money, the live version below is head over heels better than the original album cut, which in this case simply serves as a template for live performances.

The allusion to the Biblical story serves as its primary reason for inclusion as LitRock at Issa's Sunday Service but, as is often the case with Springsteen, he sneaks something else in to: the reference to East of Eden, the Steinbeck novel which took its name from the Cain's expulsion to the Land of Nod (no giggling here).

In the summer that I was baptized
my father held me to his side
As they put me to the water
he said how on that day I cried
We were prisoners of love, a love in chains
He was standin' in the door I was standin' in the rain
With the same hot blood burning in our veins
Adam raised a Cain

All of the old faces
ask you why you're back
They fit you with position
and the keys to your daddy's Cadillac
In the darkness of your room
your mother calls you by your true name
You remember the faces, the places, the names
You know it's never over it's relentless as the rain
Adam Raised a Cain

In the Bible Cain slew Abel
and East of Eden he was cast
You're born into this life paying
for the sins of somebody else's past
Daddy worked his whole life for nothing but the pain
Now he walks these empty rooms looking for something to blame
You inherit the sins, you inherit the flames
Adam raised a Cain

Lost but not forgotten, from the dark heart of a dream
Adam raised a Cain

Happy birthday to Little Steven and if you are a fan of garage rock, the link above at his name will take you somewhere where you can get lost for weeks.


This week's featured poem comes from Lilliput Review #46, June 1993. #46 is a broadside issue, still available via Lillie, and as a special treat for Albert Huffstickler fans (excuse me, no pushing, that's right, I'm first in line), here is Twilight On Trinity in its entirety.

Sitting at an upstairs window
watching the rain fall
on Trinity Street,
it’s early yet
but the air
has an evening
feel to it--
as though the day
had decided
to blow everything
off and huddle
in the shelter
of an awning
out of the rush.

I would have written
but I’ve written you
twice and you haven’t
answered and after I
write to you, I
start talking to you
in my head and that’s
not too good a thing
after so long--I
mean it’s better not
to write too much.
It’s better just to
wait for an answer.

But the rain--
have you noticed
how it changes
personality from
one visit to another?
This rain is a woman
waiting for someone,
very gentle,
so very gentle,
not even sad.

I mean,
I could say to you
after all these years
that it doesn’t matter,
that I’m ‘‘over you ‘‘--
whatever that means.
I could say that
you’re less of a
presence in my space
but it wouldn’t be
true. The truth is--
well, I don’t know
what the truth is.

But I wouldn’t be
talking to you if
some part of you
weren’t still here.
I think the rain
is some kind of
conductor. It
links all those
it falls on.
Now tell me
you haven’t thought
the same thing
sometime.

And the rain that
falls on Trinity Street,
that borderland between
the affluent and the
fallen--that rain
is absolutely necessary.

But if I knew
it was raining
where you are,
then I might
write you anyway
because then, you
see, it wouldn’t
matter
who owed who
a letter.

But of course
I don’t know
just how it is
this moment
where you are
and now after
all these years
I have to confess
I’m not inclined
to take chances.

So what I’ll do is:
I’ll sit by this
upstairs window
on Trinity Street,
watching the rain,
thinking about
the letter I’d write
if I were going
to write while
down below
on this borderland street
the named and the nameless
walk side by side
in the slow fall.

Over the years, I published 5 broadside issues of Albert's work and have to say that this one was his personal favorite. He loved it when I printed it in a variety of colors and asked me to surprise him on the occasions when he asked for more copies.

I do miss him, all these years later.

To sum it all up, here's the master:

all night looking
at my wrinkled hands...
autumn rain

I had heard this years ago and liked it but had completely forgotten it. Very fine tune.

well
I'm gonna write her another
letter, poem, or book
though she never replies... rain OR shine!


after all of these
years
she has us pegged:


that second stanza REALLY got me!

and
do send me TWO copies..

Charles, yes, this one seems to be buried deep in the Boss catalogue ... glad you liked it.

Ed, will do, two winging your way.

Twilight on Trinity made me smile and sigh and nod my head. Been there, man.

And thank you Huff for saying so perfectly what I could not say...

Jim & Curtis, glad it connected - the artwork he did for the cover is top notch, too -

I read one of Huff's poem at the Saturday night reading. More about that in the next post ...