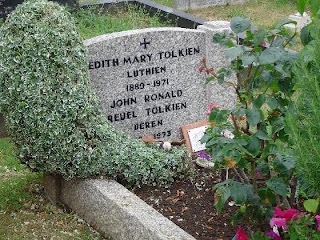 This week's LitRock entry on Issa's Sunday Service puts some of the rock back in the lit. Led Zeppelin offered many a gift to the first wave of serious Lord of the Rings maniacs stateside and none is arguably better than "Ramble On." Lyrics and music blend nicely into an infectious little number that bears up under repeated playings.

Here's a bonus video of Plant and Page performing a tasty version from 1995.

This week's Lilliput poem comes from issue #49, which was featured in a post previously this year. #42 was a homage issue, where poets got to have their say about idols, influences, and various imps of an impressionable nature. What follows is a real treat, Lilliput-wise: one of the many "Brobdingnag Feature Poems" that have appeared in the mag over the years. What is a Brobdingnag Feature Poem? Well simply put, it is a poem that goes beyond the normal 10 line limit for Lillie. One of the two forthcoming issues, which should see the light of day in December, will showcase #57 in the Brobdingnag series. So it is rather obvious that, though the mag is all about the size-challenged, sometimes my lack of math skills is readily apparent. This poem by Carl Mayfield is an outstanding little number; though it helps to know the work of Philip Larkin, it isn't totally necessary to appreciate how finely articulated and philosophically grounded my long-time correspondent Carl is.

You spoke across the Atlantic
of high windows, of undiminished
youth living elsewhere--
lines of darkness too true
to be upstaged by any poet--
you, me, the saxophone player.
You were the genius
of what didn't happen,
conversant with the impulse
to notice the color of the sun
but fail to see the radiance.
You avoided being duped
by flesh and blood,
watched the light come up
wherever you were,
and the life go down
in your willingness to breathe.
You said you didn't know more
as you grew older, but who does?
Death takes the lot of us
and lets the wind decide who was tallest.
You exchanged your life
for the truth, only to discover
there is more truth
than there is life.
Ah Philip, so many years
of honesty, so many words
writ on water--is your soul
any lighter because you did it so well?

And one from the master, a tad more succinct:

entrusting the thicket
to the field crow...
the lark sings

Lana and I get such a huge kick out of the lyrics to RAmble on every time we hear it. "but gollum and evil one crept up and snuck away with her."

Plant & Page, sure know there way around a (lit)Rock song. Ramble On is a classic!

Thanks, folks - no doubt they'll be back for a return appearance.