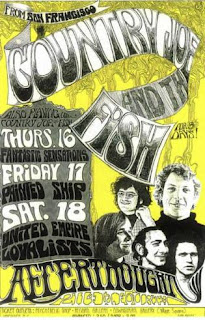 The album Electric Music for the Mind and Body by Country Joe and the Fish is probably one of the 10 best albums of genuine 60's West Coast psychedelic rock. And we are talking some pretty heavy company: Grateful Dead, Jefferson Airplane, Quicksilver Messenger Service, Love, Moby Grape, The Doors, The Byrds, Steppenwolf and on and on. "Not So Sweet Lorraine", this week's featured track at Issa's Sunday Service, is probably one the strangest and more salient pieces of spot-on satiric psych rock of that era. One might trace the history of songs about goth girls from the moment of this song's inception. For those who think that the 60's was all flowers and light, think again:

The joy of life she dresses in black
With celestial secrets engraved in her back
And her face keeps flashing that she's got the knack,
But you know when you look into her eyes
All she's learned she's had to memorize
And the only way you'll ever get her high
Is to let her do her thing and then watch you die,
Sweet Lorraine, ah, sweet Lorraine.


The joy of life, indeed. But if you want to really find joy, as in "Now I've just found joy", look no further than Nat King Cole, Ray Brown, Oscar Peterson, Ray Ellis, and the incomparable Coleman Hawkins for the one and only original "Sweet Lorraine."

And, ya know, sometimes it just all comes together, as in this issue of Nick Fury, Agent of Shield, with CJ & the Fish singing the verse from "Not So Sweet Lorraine" that got it LitRock status, with its reference to one of the greatest books of any culture, The I Ching: 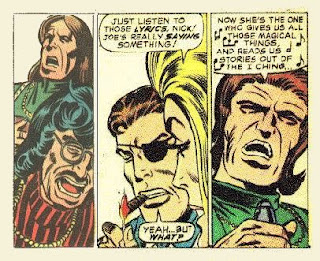 Who Is To Be Master

Time to let
the husky words you wrestle
pin you down.

Some poems never get written:
living them through was enough.

And, in the same spirit, a gentle reminder from Issa:


words
are a waste of time...
poppies


"get in your bag
and do your thing"

The Joy in life I find is in the moment of the decision to find it and drink it in.

But that is just my viewpoint.

Country Joe and the Fish were great satirists. See, for example, "Bright Suburban Mr. and Mrs. Clean Machine" or "The Harlem Song" from their album 'Together.'

Ant group with a drummer named Chicken Hirsch is worth a listen.

Thanks, Don, for making me dust off some of that old vinyl again!

Thanks, Tom, glad you liked this one.

Jim, Chicken Hirsch rocks ... I'm not sure if I have "Together" around here. Will have to see if I can unearth it somewhere.