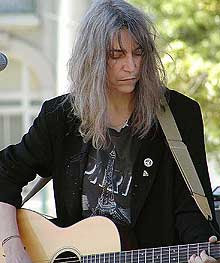 This week was the birthday of one of the premiere rock poets of all time, Patti Smith. In celebration (and to shelve all those Lawrence Welk and doo-wop shows for at least a week), public TV has been airing the documentary film Patti Smith: Dream of Life on POV. Appropriately, this week's litrock selection at Issa's Sunday Service is her rendition of the final part (or addendum, for purists) of Allen Ginsberg's masterpiece, Howl: that section, entitled "Footnote to Howl," Smith recorded as "Spell: (Footnote to Howl)."

Happy birthday, Patti. The two shows I had the privilege to attend here in Pittsburgh that she gave were two of the best rock shows I've ever seen and I've been going to concerts since 1968. The outdoor show with just a couple of hundred people in a light, cold rain was every bit as intense as the one she gave for a couple of thousand. Her connection to the audience is remarkable.

As a footnote to Howl and Footnote to Howl, here is a 2 part video made by Karen Lillis as part of her internship at the Carnegie Library of Pittsburgh. In it, she highlights all the resources on the poem Howl and Allen Ginsberg at the library. In addition, she interviewed three folks at the library intimately engaged in poetry as to what the poem means to them: Barry Chad, Renée Alberts, and myself. The video is static, the information dynamic. If you have interest in the poem and/or Ginsberg, I think you'll enjoy it.


Public television is also going to be airing, at least in Minnesota, a show entitled The Poetry and Life of Cold Mountain, about the master Chinese poet, Han Shan. You can read more about it here.

There is small animated segment in the show. Perhaps these wonderful poems, whimsically rendered, will entice you to watch:


Finally, a poem from Lilliput #56, April 1994, six poems of which were featured in a previous post. This little gem, by Charlie Mehrhoff, gives "flash fiction" a run for its money:

the big green book published by Press-22 in Portland

and the (hand done) writing by Michael McPherson


a real beauty of a book

Yes, I haven't seen the show listed locally here, either -

Somewhere around here I have a copy I found recently in an antique store of Cold Mountain poems originally published in Evergreen magazine ... that and the 1st 12 issues of the original John Carter of Mars comics from the 70's - they must be "lost together" ...

Man Ginsberg rocked, like a joycean nutbar fruitcake. I stole my first copy when I was a kid and
didn't know F.A. I've had a copy all my life and read it often. we're lucky to have artists like Patti Smith, who won't let us forget the courage the Beats had
to get the truth out where it belonged

Hey, Don, everybody's rocking here - when Ginsberg found the vibe - Blakean, Whitman, Buddha - and he hit stride, nobody was touching him ... Patti seems at times pure compassionate spirit ... you are right, of course, she has turned generations on to the Beat living legacy.