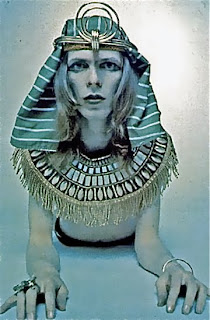 January 8th was the birthday of LitRock prince, David Bowie, and what better way to celebrate than with the retro-future tune 1984, this week's selection for Issa's Sunday Service?

And here is a stylized, very mannered live performance of the same, on the Dick Cavett Show; what it loses in studio perfection it more than compensates for by seriously rocking out.

Of course, when I think of Dick Cavett I think of one of the most amazing pieces of live television I've ever seen in my life, an excerpt from which follows:

What didn't come out until the very end of the show, was that in a review by Vidal in the New York Review of Books of Mailer's book, Prisoner of Sex, Vidal had lumped Mailer in with Henry Miller and Charles Manson (whom he referred to as the 3M's throughout the balance of the article); Mailer took the Manson mention to be a reference to Mailer's stabbing of his wife and this was what he took umbrage to and was unable to articulate until the end, when he got up in a threatening manner, from which Vidal recoiled. It seemed they both behaved rather despicably, Vidal all refinement and venom and Mailer all, well, repugnant, crass, and loaded; of everyone, Janet Flanner came off best, closely followed by Cavett, with his gallant attempt to defend his guests and himself.

That, folks, is reality TV.

Here's Cavett's 2007 remembrance of that show.


This week's feature poem comes from Lilliput Review #57, June 1994, several poems of which were highlighted in a previous post. This one seems to dovetail perfectly with the early 70's bit of footage, noted above:

I was
a bad

Our friend, Issa, seems to see through us all:


boars and bears
are my neighbors...
winter seclusion


PS For all 37 Litrock selections, check out the webpage Litrock at Issa's Sunday Service. Please note if you subscribe by email or a reader you may not see the grooveshark player or occasional youtube video, so just click through to hear and see what's up.
Posted by Issa's Untidy Hut at 9:00 AM

I just the other day saw his interview with Sophia Loren

Ahhh, Dick Cavett. Pity the souls who were not privy to his genius. Live TV at it's best.

Lj, Cavett and Bowie, with a little Vidal/Mailer seasoning ... ah.