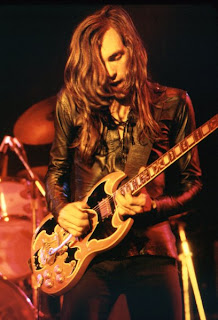 This week's Issa's Sunday Service selection is from one of my favorite bands from the 60's, for which I took a lot of riding from my friends: Quicksilver Messenger Service. The song is the opening cut of their debut album and was written by musician/actor Hamilton Camp. It's another LitRock song that takes its storyline from the Bible; it's lead guitar line, by the late John Cipollina, comes directly from heaven, no intermediary necessary, thank you very much.

The lyrics are simple yet powerful. Quicksilver's take matches that power; as a folk tune, it has a different kind of power. Still, it works just fine both ways. Here's Gordon Lightfoot's version for comparison. And here are those lyrics:

Turn around, go back down, back the way you came
Babylon is laid to waste, Egypt's buried in her shame
Their mighty men are beaten down, their kings have fallen in the ways
Oh God, the pride of man, broken in the dust again

Turn around, go back down, back the way you came
Terror is on every side, though the leaders are dismayed
Those who put their faith in fire, in fire their faith shall be repaid
Oh God, the pride of man, broken in the dust again

Turn around, go back down, back the way you came
Shout a warning to the nations that the sword of god is raised
On Babylon that mighty city, rich in treasure, wide in fame
It shall cause thy tower to fall and make it be a pyre of flame
Oh God, the pride of man, broken in the dust again

Oh thou that dwell on many waters, rich in treasure, wide in fame
Bow unto a god of gold, thy pride of might shall be thy shame
Oh God, the pride of man, broken in the dust again

And only God can lead the people back into the earth again
Thy holy mountain be restored, thy mercy on thy people Lord

For a taste of what the band was like at its peak, here they are covering Bo Diddley's Mona with a two guitar attack and lots of groovy dancing!

You will notice that the Grooveshark widget, above, has gotten decidedly ugly. There doesn't seem to be anything I can do about it at the moment; perhaps I'm just caught between changes or the GS people are just looking for some more real estate. All I can say is that you should have seen it before I edited it down. However, working with the old lemonade from lemons theory, I am going to try the reverse and whip up a giant widget covering all the songs featured to date. Stay tuned. (*** The decidedly less ugly version became available, so I've posted it side-by-side above ***)

This week's selection comes from Lilliput Review #61. While looking through this issue, I was struck by the presentation of art and poems over these two pages so thought, for a change, I'd scan them in for perusal. The poems are "How She Slumbers" by Albert Huffstickler and "After Sex" by John Grey. On the left, the artwork is Huff again and Guy Beining on the right. 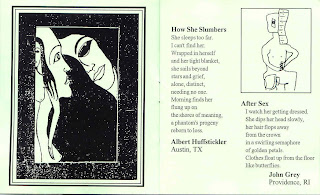 
And the final words to Master Issa:

I've got some 1960's yellohed paper around here somewhere

Wilde's 'Salome' with the famous Beardsley drawings and

watch and wait for something to happen

which it all-ways does.


full moon
waiting
for something to happen

I still have my promo version of that Quicksilver Messenger Service album, which I obtained (shall we say) by dint of being a fill-in for the midnight-to-4:00AM DJ on a campus radio station many moons ago. It came from the record company packaged with a Steve Miller Band album and one by Music From Big Pink. Nice trio, that!

Coincidentally, my daughter (who was also a college DJ) was playing it just last week.

Jim, you know the coincidences start piling up and pretty soon it's some kind of synchronicity -

That's the kind of full circle ya gotta love ... thanks for the note.

Correction: Music From Big Pink, as everybody knows, was by The Band.

That outdoor concert video reminds me if what happy idiots we were.

Huff was a genius.

We, indeed, were the happiest of idiots and it still makes me happy whenever I see the (relatively few) young who still dance with this abandon ...

I've never even heard of this band before today. I kind of like their sound, though. Definitely a 60s sort of sound.