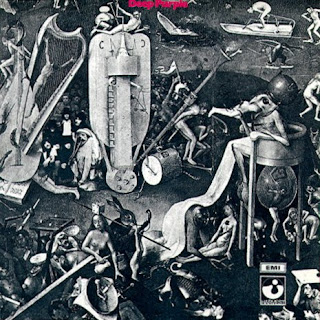 For those familiar with the group Deep Purple, their selection in the LitRock category might be a head scratcher: isn't this the head banging, hard rock, heavy metal band of "Smoke on the Water" and "Space Truckin'"? And right you would be, 70's classic rock mavens. However, Deep Purple started out a bit differently and this cut is probably the apex of that difference: a near 13 minute suite that combines rock, pop-rock, heavy classical, and, yeah, literary pretensions, the later being used in the strictly non-judgmental sense. This after all was the edge of experimentation; rock operas, suites, the cross-pollination of genres, album length songs etc. Here is their intro to the piece from the liner notes:

A sort of 3 part concert about the month of April. The first
section is played by just Jon and Ritchie. Jon played piano
and organ, and Ritchie played acoustic guitar (a rhythm
pattern and a double tracked lead pattern) and electric
guitar. The choir was added afterwards. The whole section
used about 11 different tracks. Also Ian on timpani can be
heard in the background. The second section is Jon's
orchestral description of April. The instruments used were:
two flutes, two oboes, cor anglais, two clarinets, two violins,
viola and two cellos. The third section is a treatment of the
chord sequence of the first section in a more "Purple" way.
As a whole, we hope April hangs together as personal
evocation of a beautiful, but sad (to us) month.

And the lyric (which, be forewarned, does not kick in until around the 8:45 or so mark):

April is a cruel time
Even though the sun may shine
And world looks in the shade as it slowly comes away
Still falls the April rain
And the valley's filled with pain
And you can't tell me quite why
As I look up to the grey sky
Where it should be blue
Grey sky where I should see you
Ask why, why it should be so
I'll cry, say that I don't know

The literary allusion here is, of course, to Eliot's "The Waste Land" and its infamous opening line: "April is the cruelest month ..." It is amazing that this song has stayed with me for 40 years. The lyric itself is feather light, but the striving for something else in the rock medium is not and, I believe, they pulled it off in a way so many genre bending/blending experiments did not. The album from which this comes is the self-titled third album, "Deep Purple," the original cover of which was a detail from the Hieronymus Bosch painting "Garden of Earthly Delights," pictured above (It now inexplicably looks like this.) Bosch, you probably know, is responsible for the Lilliput logo at the top right of this page. Some of the rest of the album has some LitRock connections: "Why Didn't Rosemary? (Ever Take the Pill)" rather glibly alluding to the then culturally resonant Ira Levin book, Rosemary's Baby, and the successful Roman Polanski movie adaptation, and the cut "The Painter," referencing both art and writing.

And, because we are here, an odd bit of business: a mashup of T. S. Eliot reading the opening section of The Wasteland" (Burial of the Dead) with an excerpt from the biopic about Joy Division lead singer, Ian Curtis, entitled Control:


This week's poem comes from issue #59, in August 1994, 5 other poems from which may be found in this post. This one is from the inimitable Albert Huffstickler, on one of his favorite subjects: rain.

Grey rain day in Austin, Texas.
The soul slips in and out,
never straying far
as though fearing the rain might catch it.
I dream over coffee,
something in the back of my mind,
some final perfect thought
that eludes me finally,
slipping away
into the grey rain air.


And from that other master of the elements, Issa:


the winter rain
dumps and dumps...
Buddha in the field

Thanks, Charles. Was away for 3 days and posted this via scheduling - sort of screwed up the layout, but corrected now.