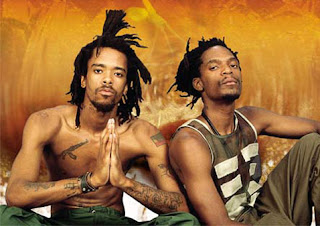 This week's selection is one of many songs that make reference to the work of Eric Blair, otherwise known by the pen name George Orwell, this one being possibly the most powerful and most relevant to his original message. "Animal Farm" is every bit as political and vile as "1984," and Dead Prez underscores this loud and clear.

In "Animal in Man," all the characters names remain the same except Mister Jones, the farmer, who is transformed into Sammy, and we all know whose Uncle he is.

The revolution will not be televised.

The British made a fine full-length animated version of "Animal Farm" in which no punches were pulled. If you have one hour and eleven minutes, treat yourself. If you'd just like a taste, here is the first ten minutes:

Hallmark Entertainment did a live action version but we are not going there. The Kinks also have a song called "Animal Farm," a million miles from Orwell, so we won't go there today either; perhaps, later in a different installment, from a different point of view.


Rita Cummings pointed out this excellent feature on Issa done at Haiku Chronicles.  While listening to the audio, you can follow along the text with this .pdf.  Anita Virgil does not avoid the tough questions about Issa, right from the get-go.  In addition, she admits when she's been wrong; it doesn't get much better than that for me.

2 Reasons To Get Up

The sun shining through the parched rice grass.
The rice letting it.

too small
to roll off -
the drops of morning mist.


in the misty day
not growing older...
grave tablets


PS  Get 2 free issues     Get 2 more free issues     Lillie poem archive
Send a single haiku for the Wednesday Haiku feature.  Here's how.
Go to the LitRock web site for a list of all 88 songs

Each of the three short poems you've chosen to take out this Sunday service is gemlike, moments in time catching sun-glints through the winter morning mist.

And here's a couple more for you (note the dedication, if you will):

Thanks, Tom - that means a lot.