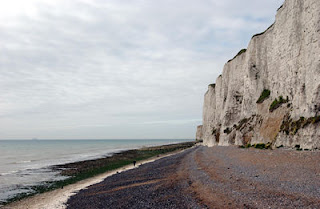 At first blush I wasn't really sure this one was going to make it on the Sunday Service because I got lost in the title, letting the all important lines

But we could come and go
Oh, and talk of Michelangelo, oh

from T. S. Eliot's "The Love Song of J. Alfred Prufrock" slip right by me.  Those lines serve as a recurring refrain in the poem, underscoring the poem's title by creating a chorus effect.  Once this quote became apparent, the title "Dover Beach" seemed to truly resonate, hence the tune's inclusion on the strength of two strong lit allusions.

Matthew Arnold's poem, "Dover Beach," rings the death knell of the pre-modern era, or the coming of the modern one, if you prefer.  It reminds me most of the novels of Thomas Hardy and their spirit in a world where people struggle for meaning, without faith or belief.  It is, simply stated, one of the greatest poems written, thematically, in the English language.  Their seems to be some of its lyrical ennui, too, in the song; the narrator would run away to a "perfect world" if there was one.

It seems that there isn't, in either poem nor song.

Though the Bangles had plenty of hits with songs penned by others, this one was written by Susanna Hoffs and Vicki Peterson and is a example of fine litrock and an overall solid song.


If I had the time
I would run away with you
To a perfect world
We'd suspend all that is duty or required.

Late last night you cried
And I couldn't come to you
But on the other side
You and I, inseparable and walking.

If we could steal away
Like jugglers and thieves
But we could come and go
Oh, and talk of Michelangelo.

The day you looked at me
And it was on your mind
The world is no one's dream
We will never ever find the time.


The sea is calm to-night.
The tide is full, the moon lies fair
Upon the straits; on the French coast the light
Gleams and is gone; the cliffs of England stand;
Glimmering and vast, out in the tranquil bay.
Come to the window, sweet is the night-air!
Only, from the long line of spray
Where the sea meets the moon-blanched land,
Listen! you hear the grating roar
Of pebbles which the waves draw back, and fling,
At their return, up the high strand,
Begin, and cease, and then again begin,
With tremulous cadence slow, and bring
The eternal note of sadness in.

Sophocles long ago
Heard it on the A gaean, and it brought
Into his mind the turbid ebb and flow
Of human misery; we
Find also in the sound a thought,
Hearing it by this distant northern sea.

The Sea of Faith
Was once, too, at the full, and round earth's shore
Lay like the folds of a bright girdle furled.
But now I only hear
Its melancholy, long, withdrawing roar,
Retreating, to the breath
Of the night-wind, down the vast edges drear
And naked shingles of the world.


Ah, love, let us be true
To one another! for the world, which seems
To lie before us like a land of dreams,
So various, so beautiful, so new,
Hath really neither joy, nor love, nor light,
Nor certitude, nor peace, nor help for pain;
And we are here as on a darkling plain
Swept with confused alarms of struggle and flight,
Where ignorant armies clash by night.

Of course, legacies being what they are, when the obits start rolling out, this is probably the one The Bangles will most be remembered for, played live right here in Pittsburgh, PA ....

Since things are rapidly slipping from the sublime to the proverbial, here's the one that trumps them all:

Oh, that's right, we weren't thinking, we were laughing ...

--------------------------
I'm happy to report that the new weekly feature, "Wednesday Haiku @ Issa's Untidy Hut," will be up and running with its first installment this week.    For details on how to send a single haiku/shortie for consideration, check this past Wednesday's post.

This week's feature poem comes from Lilliput Review, #113 and is another of Albert Huffstickler's short stunners.  I miss him so much.

I will sit and
ponder till
the grass grows
into me,
tracking my veins
to my heart.

dewdrops forming--
when might I become
grass...or a tree?

PS  Get 2 free issues     Get 2 more free issues     Lillie poem archive
Send a single haiku for the Wednesday Haiku feature.  Here's how.
Go to the LitRock web site for a list of all 87 songs

He was making room.

(I hadn't forgotten the Hecht - I didn't know it. Thanks for pointing it out)

The repeated reference: "if we had the time" is interesting. I wonder if the third stanza of Profrock had any influence there?

And of course, in the background is Ecclesiastes:

a MOST amazing site...
coming via a boat from France in 1970
towards Dover and SEEING those cliffs!

The White Cliffs of Dover really are white
& not an abstraction or a metaphor...

the women come and go
speaking softly of Michelangelo

the women come and go
and so do the men

I like how you've characterized Arnold's poem here, that it "rings the death knell of the pre-modern era, or the coming of the modern one" -- to me, it seems to be a little of each.

Reading the poem here, I'm finding it recalls echoes of tone and syntax in some of Rexroth's poems: the short terse phrases at the beginning of the poem, for instance, or the recollection of Sophocles in the second stanza.

(Other moments in the poem seem distinctly un-Rexroth-like: "sweet is the night air!" or "vast edges drear", which come fully out of the fading Romantic vision that the poem is so much about.)

I do need to ask -- is there a reason why you've omitted the last line of Arnold's poem?

Charles, though not a huge Eliot fan myself, this is one of his very best.

Fred, thanks for pointing out some more corollaries - I think what you cover really speaks to a similar tone in both poem and song, which is pretty amazing for an 80s pop group.

Kokie-san, was this on the way back from Greece sometime? And, yes, the most obvious reference of all, which I failed to mention, still repeated down thru the Beatles, Stones and beyond - Come Together etc.

Lyle, thanks for pointing out the omission of the last line, which I've restored. Been having some minor difficulties with the beta Blogger editing function, but it is 1000% better than it was and the error most certainly was mine.

Your Rexroth thoughts are interesting - I hadn't thought of this, though a copy of "The Morning Star" had overnight fallen from my desk at the foot of my computer, which I'll simply leave open to interpretation.

Thanks, Mr. Kokkie-man ... Rexroth always a breathe of fresh air ...

Here's a little-known variant version of the Arnold classic.

I sure do get
a bit
.. confused


as to which blog that I am
on and commenting from...

was looking for that movie Blythe Spirit

""familiar figures on the river"
as the paddle-boat goes by...

this move IS better than the book

how in-the-hell DID this guy write so many GREAT books?
and with a quill pen!

must be that The REAL Dickens is/waa
either
Shakespeare or Twain, or Dustyevsky

I like that Eddie Arnold poem too... Herd him recite it to ZSZZSA on Green Achehers over on the

Well, Tom, that is a beauty no doubt, reminds us all to keep our feet on the ground and our eyes on the potholes - I'd say it takes the cake but am afraid one too many puns and this post is going to collapse on its own pins ... very enjoyable poem.

Thanks, gentlemen, I needed that!

The opening of the third stanza "sea of faith" reminds me of Jim White's song "Nine Miles To Go on a Ten Mile Road" from his CD "No Such Place." Indeed, I nominate that tune for the Lit Rock series on the strength of those three word alone: The Sea of Faith.

Jim, the crack staff at the Hut are on the case ... more to come.

Ok, Jim, there is a consensus among staff, after listening to the Jim White song (for the very first time), it's in and will be a future selection on the Sunday Service.

Two issues have been duly added to your subscription, which now runs through #181.

I'm with you on missing Huff. Philosopher and poet of the common man! Thank for the poem, don't think I'd seen that one before. And thank you for also for making me think of him.....

Thanks, K - just received an email from someone new this morning who mentioned that his love of Huff helped him find his way to the Lillie site.

It is and will continue to be those who love him that keep him alive, for all of us. I remember a poem of his about when the last person to remember you dies, then you are truly dead.

Long live Huff. Pass it on.

Hail Jim White. That must have been the 11-Mile post we just passed. Possibly some landmarks in here Matthew Arnold would not have been able to understand. (Perhaps fortunately for him.)