A Little Treasury of Haiku: Part 1 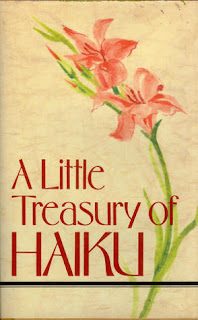 A Note: I began this post, thinking I would cover all I needed to and be done, but as I progressed it just got longer and longer.  As a result, I thought to spare you all the simultaneous misery and irony of a lengthy piece on such a brief book, so I've decided to split it in (at least) two.   Part II will, hopefully, be next week and if it goes on much longer, scream mercy and click away.

Some time back, in the comments section to a post, we got to discussing the translator Peter Beilenson and the fine work he did for a number of publishers, in particular the Peter Pauper Press, which was almost singlehandedly responsible for introducing, at very modest prices, an entire generation of the uninitiated to haiku.   During that discussion, I promised I would take a look at the volume A Little Treasury of Haiku, and so that time has arrived.

Since it was a volume I didn't have and I'd seen in at the library and was impressed, I purchased a very nicely rebound, if somewhat foxed at the edges, used copy for a reasonable price and dug in.  My first pass through I marked, as is my custom, poems for a 2nd and 3rd review, in this case 75 of the over 440 translated.  The volume consists of a generous selection of poems by the four cornerstones of classic haiku, Issa, Bashō, Shiki, and Buson, as well as a nice cross-section of haiku by other classic haiku poets.


One fallen flower
Returning to the branch? . . .  oh, no!
A white butterfly

I can never resist Moritake's little haiku, no matter who is the translator.  This is a fine version of a wonderful little ku.

I like the colloquial flavor of this rendition, capturing the playful poet's voice as I've often imagined it.  He thrusts us right in the moment with his exclamatory "Hi!," the reader experiencing the surprise along with the speaker at the same time.  Of course, I had to include it since this is where the blog gets its name - a nice coincidence certainly that the poem is very good.

The drawback of reading haiku in translation is obvious; we've often been told by classical scholars that we can never truly understand Japanese haiku.  We are too removed from the culture, from the subtly, from the language, to even come close to understanding.

However, the upside, it seems to me, is also obvious; if a great poet like Bashō wrote 2,000 some poems (and Issa wrote over 20,000) and 5 decent translators have renditions readily obtainable in English, there are 10,000 Bashō poems to read.  I'll often lay a number of different versions side by side and, as the blind man and the elephant, try to get a picture as I move round and round, catching an angle here and a glimpse there.

As long as I avoid provocation and those big feet, I start to get a bit of an idea, sight or no.

Which is my characteristically long way round saying I feel I've never read this whippoorwill poem before though I know I must have, at least 3 or 4 times, and I am extremely moved by it.   At this very moment (are you with me) it is my favorite Bashō poem.  It is totally immersed in the moment and ennui (or wabi sabi or whatever) and beauty and sadness, and did I say beauty, and it urges that heartbreaking whippoorwill sound on so as to continue its significant emotional impact, feeling lingering in the pure essence of its music.

Phah!  Words can't describe it - at least not mine.  But Mr. Beilenson has got it and Suzuki and the rest can, well, pound salt.


My good father raged
When I snapped the peony . . .
Precious memory!

How even the memory of rage may be precious once a loved one is gone, especially when that loved one was right.

Dewdrop, let me cleanse
In your brief sweet waters . . .
These dark hands of life

Another Bashō poem I don't remember.  This rendition must delve in  from a direction I can't recall - the word "dark" reappears here, as in the previous Bashō poem, and this poem, too, turns on that ominous word.  Of course, the darkness is also the dirt which the speaker seeks to remove with the fleeting dew, but the dual meaning is undeniable.


Quite a hundred gourds
Sprouting from the fertile soil . . .
Of a single vine

The essential oneness of all things is expertly captured by one of the finest woman haikuists of all-time.  The reader wonders: is this not the single vine that the world itself sprung from?


Starting to call you
Come watch these butterflies . . .
Oh! I'm all alone

Whether a lonely widow or widower, or an ex-lover, or a military wife, or someone thinking of a friend far away, we have all come to experience this type of expansive loneliness.  What is captured here is the speaker's emotional state of mind, of which s/he was totally unaware until this very captured moment.

For the emperor
Himself he will not lift his hat . . .
A stiff-backed scarecrow

The humor here is to the point: we are all equal in the "eyes" of an inanimate object.  Classicists may not like the poet's approach (or the translation) in this ku, but us peasants are all waving our own hats in the breeze.

Live in simple faith
Just as this trusting cherry
Flowers, fades, and falls

I'm not very sure of the use of trusting here, but this is one of my favorite Issa  poems and it speaks to the big picture of life - not just death, but all of it, in a simple 3 line piece.

And, so, this seems as lovely a place to pause until next week as is likely to come down the pike anytime soon.  Till next week and part II for Mr. Beilenson.

Just a quick note: Melissa Allen, over at the always excellent "Across the Haikuverse,"  features a couple of poems from the current Lillie issues, as well as giving a nice plug to the new "Wednesday Haiku" feature here at the Hut.


At long last, love see
the sun go down, so sure we
so unsure, watching.

PS  Get 2 free issues     Get 2 more free issues     Lillie poem archive
Send a single haiku for the Wednesday Haiku feature.  Here's how.
Go to the LitRock web site for a list of all 87 songs

I think I mentioned earlier as a comment that this is my favorite haiku collection. It was also my first collection. I was searching through the poetry section of a used bookstore when I came across The Treasury for $2 or $3. I had heard of haiku before but had never really taken a close look, so this seemed like an opportunity and at a small cost.

It also contains my favorite haiku:


My second favorite is

Hey, Fred - I was hoping you'd get back in touch.

I believe your 2nd favorite is featured in next week's post, which I'm working on this week. I actually go on about that one - it is one of my favorites also.

By the way, it looks like I'm going to need a 3rd post to finish it. It really is a wonderful book.

PS The Basho is also great.

Thanks also, Charles ... glad you liked.

I think my second favorite is also featured in your first post.

I'm not surprised that you need a 3rd post, and I won't be surprised if you go to a 4th or even a 5th post. It's a great anthology.

One thing I'm curious about -- if I'm not mistaken, all of the translations you've given here (and possibly all that are in the book? I've never seen the book first-hand) are made into the 5-7-5 syllable pattern.

My general feeling (and I seem to recall you saying something similar at some point in the Untidy Hut here) is that when Japanese haiku are translated into English, when the translations are done well, the English translations usually have more words than the original Japanese, but fewer syllables (typically maybe 10 to 14 syllables in English).

I perceive this not as a dogmatic position, just a general observation.

I'm wondering if you feel that this enhances the translations, in this instance, or if it detracts from them in any way?

I have to admit there are poems that I enjoyed that I haven't highlighted because I've covered them in previous posts in different translations, perhaps once too often. Still, I wouldn't be surprised if it spilled over to a 4th post - 3rd is a definite though.

A tip o' the hat. This little collection, so inexpensive to acquire, is really invaluable, and we have Fred to thank for sending me its way.

Very true. I think what we are looking at here is a snapshot of the resurgence of haiku in the West in the 60s & 70s. At that time, the 5/7/5 was a standard and, even though Beilenson is exemplary working in that tradition, one can occasionally feel lyrical touches and padding that wouldn't make the grade today.

You are right about the fact that I prefer the modern, shorter translation approach and you are also right that I'm not particularly dogmatic about it. It's the approach I've always taken to the magazine - judge the work on its own terms, on what's on the page. Perhaps it isn't all that matters, but to me it is of primary importance.

One thing your comment highlights for me is how relatively short the tradition of haiku is in English and how it is still ever changing as we try to wrap our minds around what haiku is and can be in English, both in translation and original.

My answer would be the weaselly "it depends." In some poems in translations, the 5-7-5 seems a perfect fit. In others, well, here is one favorite of mine from the LTH, trans. by Beilenson:

Here is another example of two versions of the same haiku:

They spoke no word.
The visitor, the host,
And the white chrysanthemum.
-- Ryota --
trans RH Blyth _Silent Flowers_
4-6-7

Thanks for the great examples.