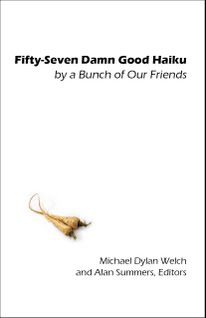 One must start from the beginning and simply say: the anthology Fifty-Seven Damn Good Haiku (by a Bunch of Our Friends) contains no poems about parsnips.

It's important to be clear from the first.

That being said Fifty-Seven, edited by Michael Dylan Welch and Alan Summers, does contain many a damn fine haiku.  Published by Press Here, out of Sammamish, Washington, there are many strong voices here and lots to ponder.

Here's a haiku that slips past you as fast as time itself:


a cloud across the sun
and suddenly
I am old

A poem about child-rearing, poignant, that manages to be large enough to simultaneously contain a big lie and the biggest truth of all:


art gallery:
a toddler stoops
to watch a spider

As truthful as this one is, the next is deeply touching:

From this brief selection, a poem that captures the essence of last things:

cottonwood rattle—
the wordlessness
of his final days

Fifty-Seven Damn Good Haiku contains 53 more modern haiku to roll about in the palm of the mind, looking for questions, wondering about answers, and contemplating that ultimate subject of subjects.

Here's my contribution, just in case next time the editors are looking for parsnips ...


A few random hairs
on his bulbous nose -
boiling parsnips

(In his generous extensive comment to this post, co-editor Alan Summers shared some more of his favorite haiku from this collection and appended order info.  Thanks, Alan)

This week's featured poem comes from Lilliput Review #133, an issue which has popped up in blog posts here and here.

walking home
after his death touching
anything

That one about the toddler in the gallery is perfect: sly, poigniant, quiet. Love it.

Hey, né, yes, that one is particularly striking -

I'm always amazed at the library how little kids will focus in so intently on the stuff adults completely ignore ...

That's the focus zen etc. is trying to get back to, at least in part ...

Dave Serjeant has another haiku I chose which remains of my favourite anthology poems. I won't spoil the surprise, you'll have to consider ordering the book!

Other favourites are this from Keiko Izawa (Japan):

harvest moon . . .
no regrets over the don’t
I dared to do

And from the other anthologised poets:

a new month—
different seeds
on the spaniel’s ears

There's an absolute killer haiku from Karen that women in particular have loved, and bought the haiku as extra-long T-shirts and coffee mugs too, but I just can't spoil the surprise here. ;-)

fine rain
his careful words
prior to hanging up

tomato seedlings—
my young daughter
shows me her muscles

waiting room—
a kid sketches a happy face
on his palm

reddening apples—
my newborn tries to suckle
the orchard air

spring dusk—
the neighbour’s vacuum cleaning
ends with a sigh

morning tidepools
a hermit crab tries on
the bottle cap

newlyweds
we leave the mistletoe up
a little longer

skinny-dip
in the full moonlight
counting laps in stars

first star
a fishing boat anchored
to the night

You will absolutely fall in love with Dave Serjeant's haiku, and I only wish I had room to squeeze in a couple more. ;-)

Please do visit my blog and make a comment and see what Carmen Sterba did to wish us luck at the U.S. launch! ;-)

Thanks very much for sharing so many more fine haiku from this collection and the order info. I've noted your comment in the body of the post with order info for those who don't read comments (blogger buries them sometimes, too). Great job on the book, Alan, and thanks for your generosity.

Thank you everyone - you're too kind!

I'm looking forward to getting my hands on a copy.

Dave, bear, and myself, we'll all looking forward to seeing the book in print.

Hopefully next month everyone will get their copies. ;-)

Alan and Dave, thank you again ... for the work and your dedication.