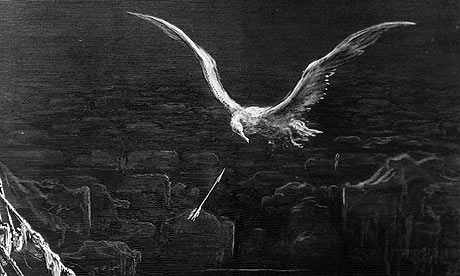 Somehow, all this begins with an American edition of a British album that for decades was never released in the states. The American version is English Rose, by the original, blues-oriented Fleetwood Mac. It turns that both albums where compilations and English Rose actually came out first. For those who are confused by an earlier, blues-oriented Fleetwood Mac, I supply the following: 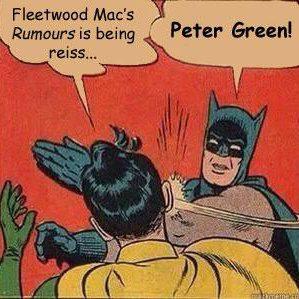 The British album, which contained today's featured cut, "Albatross," was entitled The Pious Bird of Good Omen and, of course, it's taken a rather slow Don some 30 plus years on the uptake to connect that Pious Bird with Coleridge's poem.
How thick can you get, you might ask?


Well, in preparing a session on Coleridge for the poetry group that I moderate I was listening to a recorded version (and following along with the Annotated Ancient Mariner), I stumbled across the pious bird of good omen line and received the 30 year old kick in the head, er, punchline.


And so Albatross becomes the 3 or 4th instrumental to make the Sunday Service. Hope you enjoy it.


One minor aside: back in the mid-60s when I was in high school, the rock and the roll was verboten in the Catholic institution I attended. This cut, however, was slipped in by a student in the know as the music piped through the halls during the time before homeroom when students where at their lockers. The student's first name was Joseph, though his last has faded in my dull brain (have to make room for new facts, see above) over the years. Let me reiterate something I said to him many a year ago.

Here's the original Fleetwood Mac in their original blues glory - this one's for you, Joe.

Though this is certainly hyperbole, performing on "Playboy After Dark" was a lark of another order.  I didn't trim the video not just because of the music but watching Don Adams and Arte Johnson jam out is just too good for words:

from his hole
the snake pokes his head...
the cat slaps it