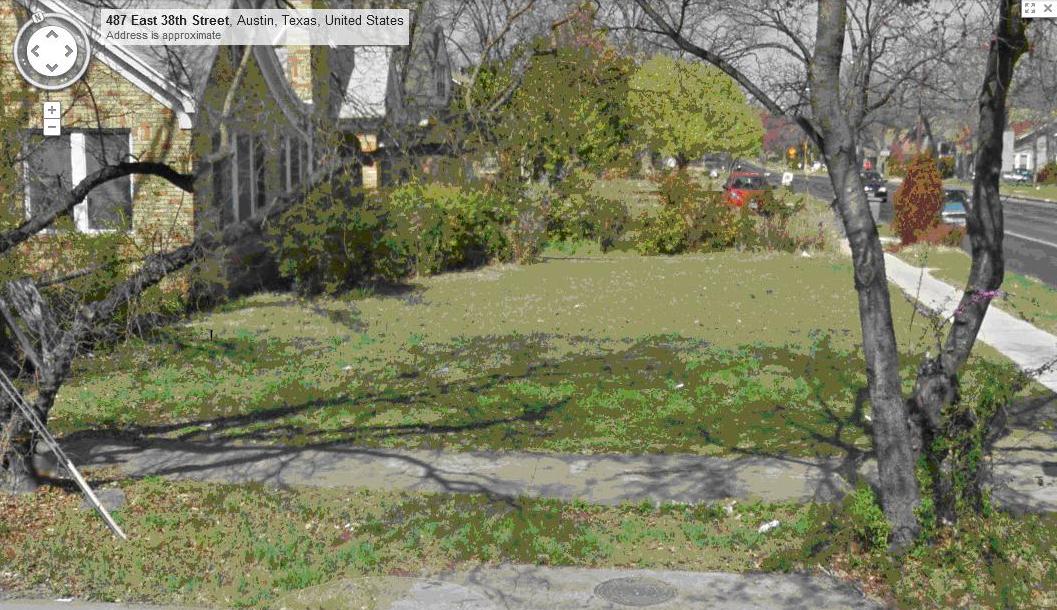 The following notice is from long time correspondent Elzy Cogswell. Elzy is the president of the Austin Poetry Society and, like myself and many, many others, is a long-time fan of the late small press poet, Albert Huffstickler. Huff is one of the finest poets I've had the pleasure to publish in Lilliput Review over the last 24 years and so it is an equally great pleasure to share the news that, after a long, difficult campaign (I posted about this idea way back in April of 2010), the city of Austin is seeing its way to honor one of its favorite sons.


And a lyrical son he was and, in memory, continues to be.


And, since it wouldn't be about Huff if it didn't have some poems, you will find a small selection of pieces I published by him over the years following Elzy's announcement.

I've appended some screen grabs google maps, of the space, above and below.

Two years ago, the City of Austin announced it was looking for a name for a park across from City Hall. The Austin Poetry Society endorsed naming the park for the late Austin poet, Albert Huffstickler and conducted a campaign to support it. The trees in the park had been saved by a former Council Member, Margaret Hoffman, and the powerful Austin tree lobby endorsed naming the park for her, and they were successful, not without our support, for poets are also tree people.

However, as a result of our campaign, the Hyde Park Neighborhood Association (HPNA) took up the cause, asking for such a park in Hyde Park, Huff’s neighborhood for many years.

You may have noticed the construction of the new green space that the City is installing at the northeast corner of 38th and Duval. This project should be completed around the beginning of February when the City will turn the maintenance over to the Hyde Park and Hancock neighborhoods. The story of this green space begins with Albert Huffstickler, known to many as the "Bard of Hyde Park." Mr. Huffstickler was a longtime resident of the neighborhood and he worked at the Perry-Castañeda Library at the University of Texas from 1973 until his retirement in 1990. For most of his life he wrote poetry, publishing hundreds of poems in journals and small presses, or publishing in his own Press of Circumstance, for which he also provided the cover art. Many neighbors recall visiting with Mr. Huffstickler at one of his neighborhood hangouts like Quackenbush Bakery on 43rd Street or at Dolce Vita on Duval, where he would write poems, work on his charcoal drawings, or visit with neighbors. Ever since he passed away in 2002, neighbors have been thinking of ways to honor him.

A few years ago, City funding became available to construct a green space at a small strip of City property at the corner of 38th St. and Duval. In a joint neighborhood agreement between HPNA and Hancock NA, the City agreed to construct the green space in 2011 and construction began in November 2012. Since this will officially be a "green space" and not a park, the agreement with the neighborhoods and the City are that after construction the City will hand over all maintenance to Hyde Park and Hancock. Former HPNA President Lisa Harris and former HPNA Steering Committee member John Paul Moore were instrumental in working with the City to come up with a design and in working with our Hancock neighbors on the joint agreement for ongoing maintenance that will be necessary to keep the space well watered, mowed, and trimmed. The name Huffstickler Green became an obvious choice for this new green space in honor of the man that so many neighbors know as the Hyde Park poet laureate, and whose poems have appeared countless times in the Pecan Press. We will soon be announcing a date for the opening of Huffstickler Green when we plan to hold a ribbon cutting ceremony.


Meanwhile, we are now figuring out how to bring the Huffstickler Green into regular use by Austin poets.

This past Monday, 2/25/2013, was the 11th anniversary of Huff's passing. It would seem we all still remember and we all still love you very much, Huff. I know I do.  Here is a reprise of twenty poems of Huff's I published in Lillie over the years (and posted here back in 2010):


Raw ravines
corrugated
by wind and rain
and time.


That little old lady has a purpose.
She's a cartographer completing the map of her life.
It's there on her face,
as contained, as exact as the will that lies
deep in that small, sunken breast.
She looks around her, laughs.
Another line forms,
another move toward the completion she already envisions.
There's nothing more for us here.
Let's leave her to her work.


The woman in
the corner,
white on black,
white skin,
black hair,
black dress,
lights a
long, white
cigarette,
the orange flame
bright
against her cheek.


You are a dark space
in which a circle
of tiny turquoise stones
revolves endlessly.


This is how Hopper would have painted it:
the line of yellow dryers
catching the sunlight from the broad window.
Man with his hand reached up to the coin slot,
head turned to the side as though reflecting,
woman bent over the wide table
intent on sorting,
another standing hands at her side, looking off -
as though visiting another country;
each thing as it is,
not reaching beyond the scene for his symbols,
saying merely, "On such and such a day,
it was just as I show you."
Each person, each object, static
but the light a pilgrim.


My father, the stone,
rests in my heart
awaiting his completion
with a dry persistence.

I let him wait.
As all stones must,
he is learning patience.

I think there is a way
to sculpt silence.
Perhaps that’s what
poems are:
sculptures of silence.


We have to learn
not to replace
perception with knowledge.
Forget science.
Pierced by starlight,
I know what a star is.


Write on my tombstone:
Once so easily distracted,
now focused.


In the house of rain
there are many mansions


I wanted to understand
so much all at once
but learned:
to understand everything,
begin with one breath.


And now your shadow
falling across the page.
Where are you?
Why have you abandoned
your shadow?


We forget we're
mostly water
till the rain falls
and every atom
in our body
starts to go home.


All those
I have mourned
will die
with my dying:
my mother's hopes,
and my father's doom:
all the faces,
all the rooms.


And you too shall
pass, the autumn
tells me, shaking
its leaves
in my face. 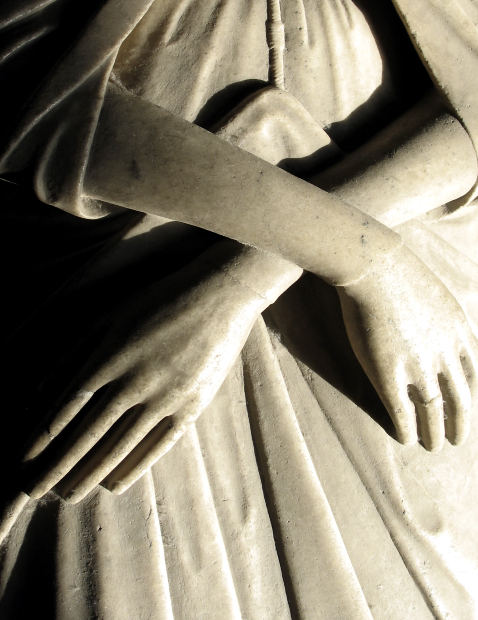 As you will note from the work above, Huff had a great deal of affection for stone:

a boulder that looks
like an old woman asleep...
autumn evening

Really good news on the Austin front. I was there after Hurricane Katrina. I remember their motto, keep Austin weird. Although poets aren't necessarily weird, we usually get lumped in to that category. :)

something "sacred" comes through via what he writes.
Quiets my "me"....
and

The woman
in the corner


has awhile ago "grabbed" an image that I drew...

nice to re:visit these gems of his.... and his 'voice'
IS a Breath of Fresh Air !

Thank you for the great news! I know exactly where this is. Having had the privilege to live a few blocks away for many years and to see Huff in the flesh as he shuffled around, printing copies of his typed poems in Fresh Plus, flirting with young women who adored him outside the bakery,etc., etc., this warms my heart. As we/they say in Hyde Park, Huff lives!

Bravo Huff! Much cause to celebrate. And Don, thank you for sharing Huff's poems of rock, water, soul and spirit.

There it is, Ed ... something sacred, a kind of grace ... 11 years gone, it is so hard to believe, and though the tribute is in some ways humble, a tribute it is.

Now, to start, one tree, with one bench beneath ...

Cheers, Keddy ... perhaps one of these days ... maybe they'll be a dedication and more people than can stand toe-to-toe will fit in this beautiful, sacred (to use Ed's word) space.

Constance ... if it wasn't for Huff, where would we be? Thanks.

It's uplifting to see Austin honoring Huff this way.

We in Hyde Park are also excited about the creation of Huffstickler Green, or as I have come to think of it, Huff's Corner. Elzy and the APS were very gracious in supporting this proposal,seven years in the making. They say success has many fathers, and when it comes to the City of Austin, such fathers grow long in the tooth waiting for things to happen. As we prepare to dedicate this little space to Huff's memory, we hope to involve the poetry community in doing it right, and have decided to postpone the event until the new trees and plantings are green and leafy. I want to point out that the google screen grabs in this post are of the corner across the street. I don't know what streetview will show yet, but the site today (the northeast corner of 38th and Duval) is graced with landscaping designed by our neighbor Michael Biechlin, featuring a low limestone sitting wall that, under the new oak trees, will one day be a wonderful place to sit and ponder our world, on the same Number 7 bus route that passed Huff's favorite tables at 43rd Street. I think he would approve,

Bart, as you know, small press poets come and go like each year's blossoms, but Huff keeps coming back every year.

Thanks so much for the info and the correction on the google screen grabs.

Nice to hear of the postponement for a bit. I wonder if you could keep me in the loop about the dedication. I can get the word out to the larger small press community (oxymoronish there) and, who knows, I'd love to be there myself if I can find the money and the time.

It may have taken a long time but Austin has done something virtually unprecedented and you all are to be commended for that.

Huff means so very much to so many people who never actually met him, the ultimate testimony to his work.

Sincerely,
Don Wentworth
Email lilliputreview AT gmail DOT com (substituting @ for AT and . for DOT)