Huff Lives: the Life and Work of Albert Huffstickler 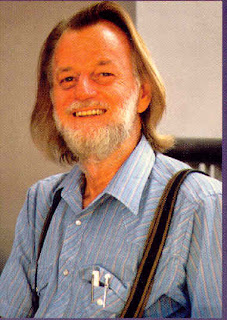 There have been two postings in recent days about Lilliput Review favorite, Albert Huffstickler, at the Feel Free to Read blog. The first is a general overview of Huff's life and career and the second is, entitled "The Bard of Hyde Park," a reprint of an article from The Austin American Statesman by Chuck Lindell on his passing and his influence on the local community and area poets.

I've spoken often of Huff here. He had a profound affect on me and Lilliput Review. It continues to be a point of delight and amazement that a small press poet, who never hit it big, continues to be revered, remembered, and discussed 7 years after his passing. For many years he was regular as rain in LR (and those of you who know his work well know, too, that the metaphor was not selected randomly); he continues to grab people via this blog and, whenever his work is posted, to be commented on. He has a popularity with regular folk that is analogous in affect, if not immensity, akin to Bukowski and Collins, without the commensurate baggage of either.


Though a bit lengthy, especially for this blog/mag's focus, I found the following poem to be of interest and, old school though it is, to be as modern, in both its subject and point of view, as can be. The title is a variation of the Latin phrase "poeta nascitur, non fit," meaning "a poet is born, not made." Carroll's reversal in his title says it all. From that title on, the playfulness for which the author of the Alice books was well-known is admirably displayed.

"How shall I be a poet?
How shall I write in rhyme?
You told me once 'the very wish
Partook of the sublime.'
Then tell me how! Don't put me off
With your 'another time'!"

The old man smiled to see him,
To hear his sudden sally;
He liked the lad to speak his mind
Enthusiastically;
And thought "There's no hum-drum in him,
Nor any shilly-shally."

"And would you be a poet
Before you've been to school?
Ah, well! I hardly thought you
So absolute a fool.
First learn to be spasmodic --
A very simple rule.

"For first you write a sentence,
And then you chop it small;
Then mix the bits, and sort them out
Just as they chance to fall:
The order of the phrases makes
No difference at all.

'Then, if you'd be impressive,
Remember what I say,
That abstract qualities begin
With capitals alway:
The True, the Good, the Beautiful --
Those are the things that pay!

"Next, when you are describing
A shape, or sound, or tint;
Don't state the matter plainly,
But put it in a hint;
And learn to look at all things
With a sort of mental squint."

"For instance, if I wished, Sir,
Of mutton-pies to tell,
Should I say 'dreams of fleecy flocks
Pent in a wheaten cell'?"
"Why, yes," the old man said: "that phrase
Would answer very well.

"Then fourthly, there are epithets
That suit with any word --
As well as Harvey's Reading Sauce
With fish, or flesh, or bird --
Of these, 'wild,' 'lonely,' 'weary,' 'strange,'
Are much to be preferred. "

"And will it do, O will it do
To take them in a lump --
As 'the wild man went his weary way
To a strange and lonely pump'?"
"Nay, nay! You must not hastily
To such conclusions jump.

"Such epithets, like pepper,
Give zest to what you write;
And, if you strew them sparely,
They whet the appetite:
But if you lay them on too thick,
You spoil the matter quite!

"Last, as to the arrangement:
Your reader, you should show him,
Must take what information he
Can get, and look for no im-
mature disclosure of the drift
And purpose of your poem.

"Therefore, to test his patience --
How much he can endure --
Mention no places, names, or dates,
And evermore be sure
Throughout the poem to be found
Consistently obscure.

"First fix upon the limit
To which it shall extend:
Then fill it up with 'Padding'
(Beg some of any friend):
Your great SENSATION-STANZA
You place towards the end."

"And what is a Sensation,
Grandfather, tell me, pray?
I think I never heard the word
So used before to-day:
Be kind enough to mention one
'EXEMPLI GRATIA.'"

And the old man, looking sadly
Across the garden-lawn,
Where here and there a dew-drop
Yet glittered in the dawn,
Said "Go to the Adelphi,
And see the 'Colleen Bawn.'

'The word is due to Boucicault --
The theory is his,
Where Life becomes a Spasm,
And History a Whiz:
If that is not Sensation,
I don't know what it is.

"Now try your hand, ere Fancy
Have lost its present glow -- "
"And then," his grandson added,
"We'll publish it, you know:
Green cloth-gold-lettered at the back --
In duodecimo!"

Then proudly smiled that old man
To see the eager lad
Rush madly for his pen and ink
And for his blotting-pad --
But, when he thought of PUBLISHING,
His face grew stern and sad.

Today is the anniversary of the passing of Jeff Buckley. Here he takes Leonard Cohen's "Hallelujah" to a place only he could.

loneliness--
that song the shrike
is singing!

I
at an early age
fell into the

this re:grounded me through my looking glass


that "stuff" abutt the reader/ here (in the poem) too marvelous for words:


"Last, as to the arrangement:
Your reader, you should show him,
Must take what information he
Can get, and look for no im-
mature disclosure of the drift
And purpose of your poem.

"Therefore, to test his patience --
How much he can endure --
Mention no places, names, or dates,
And evermore be sure
Throughout the poem to be found
Consistently obscure.

NOT "alwas" but rather "alWAYS"

or I could dbl dribble

and write "all ways"

You know, when I read this, I thought, hmn, Ed's gonna dig it.

Checked three places and it seems to be "alway" from Carroll, with of course the sense of always as you noted. Glad you liked - good poetry, good for what ails ...

Love the fact that when you do a google image search on Huff, 4 covers he did for Lillie come up.

Good to hear that one can be remembered.

Let us raise a cup of Joe to the poet of coffee houses and diners! Huff of blue-eyed intensity, Huff the bench sitter and chain smoker, Huff the deep thinker wearing baggy pants and suspenders, Huff the lover of woman and grackles and angels, street-wise and soul deep, always and forever an artist on the scene. He is gone but I still hear his voice and take consolation.