Jack Gilbert: The Dance Most of All 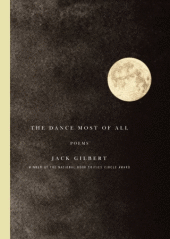 Just as Jack Gilbert has a weakness for Greek landscape, women, Japanese culture, and memories of Western Pennsylvania, I have a weakness for Jack Gilbert. His new book, The Dance Most of All, is packed with top notch poetry. He just seems to get better and better and, though the timing may be a bit off, next year's Pulitzer folks should start paying attention now.

That's how very good this volume is. Here's a little sampling, to give you a taste. Buy it, check it out at the library, steal your friend's copy: whatever you have to do, just get it done. You won't regret it (though your friend will be mighty pissed).

He is watching the music with his eyes closed.
Hearing the piano like a man moving
through the woods thinking by feeling.
The orchestra up in the trees, the heart below,
step by step. The music hurrying sometimes,
but always returning to quiet, like the man
remembering and hoping. It is a thing in us,
mostly unnoticed. There is somehow a pleasure
in the loss. In the yearning. The pain
going this way and that. Never again.
Never bodied again. Again the never.
Slowly. No undergrowth. Almost leaving.
A humming beauty in the silence.
To having been. Having had. And the man
knowing all of him will come to the end.

We have seen the population of Heaven
in frescoes. Dominions and unsmiling saints
crowded together as though the rooms were small.
We think of the grand forests of Pennsylvania,
oaks and maples, when we see the miniatures
of blue Krishna with farm girls awkwardly
beside a pond in a glade of scrub trees.
The Japanese scrolls show mostly Hell.
When we read about the Christian paradise,
it is made of gold and pearls, built on
a foundation of emeralds. Nothing soft
and rarely trees, except in the canvases
of Italians where they slip in bits of Tuscany
and Perugino's Umbria. All things
are taken away. Indeed, indeed.
But we secretly think of our bodies
in the heart's storm and just after.
And the sound of careless happiness.
We touch finally only a little.
Like the shy tongue that comes fleetingly
in the dark. The acute little that is there.

Mother was the daughter of sharecroppers.
And my father the black sheep of rich Virginia
merchants. She went barefoot until twelve.
He ran away with the circus at fourteen.
Neither one got through grammar school.
And here I am in the faculty toilet
trying to remember the dates of Emperor Vespasian.

Tomorrow's Writer's Almanac will feature a poem by Paul Hostovsky, whose work has found its way into the pages of Lilliput Review on occasion. As a few of you know, I have a huge blind spot when it comes to poetry about baseball; these are two things I love which I sincerely believe shouldn't be in the same room together, ever. However, this poem, "Little League," is very enjoyable.

Today is also the anniversary of the passing of Muddy Waters. Muddy, along with Willie Dixon, was my ticket to Chicago blues, which turned out to be good for a transfer all the way down to the Delta. A quiet wired punk-nosed white kid in the early 60's received it all in reverse, from the British invasion backwards, but better half-assed than no ass at all. I've lived with Muddy's music for over 40 years and it has never for a single moment ceased being vibrant, scintillating, and important. If it wasn't for music, there'd be no poetry. The 12 bar blues form is the haiku of American popular culture; for me, nothing is richer, resonates deeper, and challenges a staid world view better than some roadhouse blues or an Issa haiku. In the following laid-back version of the classic "Got My Mojo Workin," Muddy graciously gives lots of room to Sonny Boy Williamson II on the harp, resulting in a one-of-a-kind rendition of this signature tune. And, oh, yeah, that's Willie Dixon on bass and back up vocals.


billowing clouds--
have the pine trees
shrunk a bit?

I especially liked "going home." that one hits close to home. I often feel much the same way myself. My dad was a farmer, my mom worked in a chicken processing factory. Dad did finish high school, mom had only 8th grade. But two of their sons have Ph.Ds

Charles, thanks for the note and glad you liked it. In some ways, it's more direct and feels more personal, which was why it grabbed me too ...