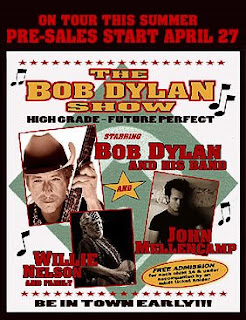 Bob Dylan's "Desolation Row" is, by request of the inimitable Ed Baker, today's feature LitRock song on Issa's Sunday Service. He didn't suggest it for today, just generally; however, today is Bob's 68th birthday, so there you go. This version is live at Royal Albert Hall in 1966 and an amazing performance. Dylan references so many literary items in this one, we could go months without having to post anymore tunes.

I'm taking suggestions for songs in the LitRock category to feature here on Sundays. Songs featured so far include Aztec Two-Step's "The Persecution and Resurrection of Dean Moriarty," Donovan's "The Way," "Rejoyce" by Jefferson Airplane, and Van Morrison's "Summertime in England." I'm especially interested in newer material; I've got quite a list of "classic" rock tunes referencing people and things literary but, being of the dinosaur generation, am lacking more modern songs. Suggestions in the comments section would be great.

This week's feature poem comes from Lilliput Review is #6, from September 1989. This is one of Lyn Lifshin's and is one of my favorite efforts of her's for LR:


annual politician of
a first book of
plums by ailing
writer under 40.
Marmosets may be
sublimated only
during February
and must be
accompanied by
a stamp, self
addressed moose


the bird is singing
but it ain't blooming...
plum tree

now to track down who now owns ALL future publication rights

to my newest book

and thus the $2.3 million (future) royalties?

how does POD work?

Thanks, Ed. Not sure about the POD thing ... wonder if any readers' have had this experience (wonder if there are any readers)?

Is there another book coming beyond "Goodnight"?

Thanks for prompting the Desolation Row post. Chris Smither does a very nice cover version of this song in which he transposes some couplets to good effect.

at bottom of this page

as pdf if this counts as it being "published"

and, Joey Madia gonna post a book (of Neighbor) each month.. there are 6

I just re:read these three...

about dawn this morning
50-60 Harley's roared by...ROLLING THUNDER bikers on the way to their anual parade..

I got tears in my eyes

Ed, well this is interesting. Thanks for the link ... new mystic, indeed...

Bob Dylan (Zimmerman) today 68? geeze
f i n a l ly
someone younger than me

Ed, great story - reminds me of the time I was abducted from work in early '69 to Central Park to see Led Zeppelin, with B. B. King opening, in Central Park at the Schaffer Music Center ... scalped tickets for $10 (originally 5 for the cheap seats) survived a near riot caused by nyc's finest (oh the story I could tell) to see one of the most amazing performances (and that's before zep hit the stage) and than zep that played past curfew, they turned off the power and they still came back and did an acapella encore of Bye Bye Johnny (sequel to Johnny Be Good) with Bonham sitting on the stage beating the ground.

I skipped the opera that night ... though saw quite a few pigeons.

actually The Two Pigeons was a ballet

also in attendance was The Queen Mum

seems to me there was also some big happening at that Zep concert in London...

I think that they were shut down there too and banned for life from England!

another event that I didn't go to was in a group house then everybody went but me and Dorrie... that thing in New York...on that farm and in the mud..

a few weeks later Dorrie ran off with the lead singer of The Natty Bumpo...
Cam Bruce

Ah, the Queen Mum was definitely not in NYC that night - Nijinsky, I think he comes into Proust from the wings and no opera that ... ballet, indeed ... for those as ignorant as
I some very minimal detail ...

Based on a Fontaine fable, eh?

through the magic of the inter-net which friggin catches everything here is the performance that I saw:

and I had just the day before gone to Carnaby Street and bought WOOL suit, shirt, tie AND

a pair of black Beatle Boots

boy was I hot!

and the shoes hurt my feet!

64 I had one of those collarless suits, bought at Robert Hall's, which my old man correctly predicted would be out of fashion yesterday ...

NO WONDER THE QUEEN MOTHER WAS THERE!!!

DAMN!!! here is the suit. except mine was brown wool tweed...

came with a vest..


only wore the boots that one time to the ballet

wore the suit only one other time in NYC


and, you wanna hear another link to this stream!


Sienna and Tony and David
(as Sienna introduced him: "this is David Zimmerman, Bob's little brother."

oh yes Edwardian glory ... here's a knock off of the Nehru collared suit:

... and Mr. Zimmerman brings us full circle, to Desolation Row ... I knew we were going somewhere,

all "we" need is a little

and maybe a cpl of other 1960's
left-overs to participate...

just look at what song they played at his funeral!

and he was 67 when he killed himself!

he is yet around in DOONESBURY ...

the only old fart savvy re: blogging/remembering...

but he's "on the other side" of the continental divide

so is Curtis Faville

Always a pleasure, off to avoid big thunderstorm ... working on two mss I'll have to tell you about sometime ...

host of your host ... now what was the name of that beer again?