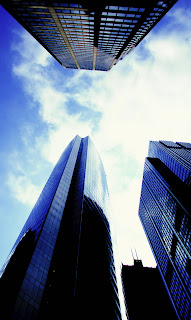 I noticed earlier this week that Saturday was Adam Clayton's birthday, Adam of U2 fame that is, and I thought, well, I'll check the list of potential LitRock songs and grab one of it in his honor.

Imagine my surprise when I found I had nothing.

So, I dug in and took a poke around and I was surprised again when I found a whole site devoted to just the topic: U2Literary. Don't know if it is still an active site but the archive is up and its got quite an impressive list of allusions. Not all fit the criteria for Issa's Sunday Service - a song must contain a direct allusion, either in the lyrics or title etc., to something literary - and so many are Biblical in nature, but no matter. I've got some future numbers to share from the best band from the 80's.

Today's selection is one of their best: "Bullet the Blue Sky."

In the locust wind
Comes a rattle and hum.
Jacob wrestled the angel
And the angel was overcome.


For those who've never had the opportunity to see U2 live, here is an extraordinary performance of "Bullet the Blue Sky," from Paris, 1987.

Last week, I mentioned that anyone with suggestions for future "Issa's Sunday Service" posts that were accepted would receive the current two issues of Lilliput Review free. Two folks took me up on it and they already have received their issues. The offer stands, so if you have any suggestions for LitRock songs (songs with direct reference to something literary: an author, title, quote, genre etc.) send 'em along and I'll send you some poetry that rocks.

And last word to the guy who sweeps up around here, Master Issa:

a mountain where
no foot has stepped...
cherry blossoms


PS A complete list of all 45 songs is available on the stand alone LitRock website, along with a jukebox to listen to songs separately or altogether. Of course, the Jukebox is also available on the sidebar of this page.
Posted by Issa's Untidy Hut at 8:26 AM