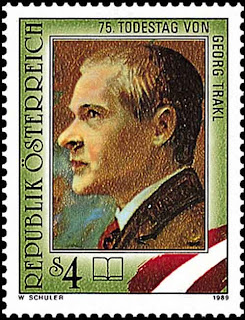 Towards the end of last year, I did a couple of posts on Georg Trakl. At that time Daniele Pantano, a poet whose work has appeared in Lilliput, got in touch to let me know he was working on a volume of Trakl translations of his own.

Forthcoming in 2013 is The Collected Works of Georg Trakl, translated by Daniele Pantano and published by Black Lawrence Press. The book will include all of his poems, plays, fragments, drafts and letters and will be well over 1,000 pages. The timing of publication will dovetail with the centenary of Trak's death (November 3, 1914). Daniele has been generous enough to share a number of poems from the forthcoming manuscript and, in turn, I've selected a few to share with readers of The Hut.

Trakl is a master at building his poems on finely wrought imagery, so finely that meaning is evoked rather than plainly stated:


My Heart At Evening

At nightfall you hear the bats shriek.
Two black horses leap across the meadow.
The red maple rustles.
The small inn along the way appears to the traveler.
Delicious the young wine and nuts.
Delicious: to stagger drunk in the darkening forest.
Cruel bells ring through black branches.
Dew drips on the face.

Frequently, there is an ominous, portentous quality in Trakl's poems. Along with this almost macabre feeling, the imagery can be close to cinematic in its execution:

In the evening, when the bells ring peace,
I follow the miraculous flights of birds
That in long flocks, like lines of pious pilgrims,
Vanish in clear autumnal skies.

Strolling through the dusky garden
I dream after their brighter fates
And barely feel the hour hands move.
Thus above clouds I follow their journeys.

Then a whiff of decay makes me tremble.
The blackbird laments in the leafless branches.
The red wines sways on rusty trellises,

While like the pale children's death-dance
Around dark rims of weathered fountains,
Blue asters bow and shiver in the wind.

Here the birds bring a lighter note, flying off to more hopeful fates, by implication leaving a darker, foreboding landscape. This fate enters with the smell of decay. The blackbirds left behind are lamenting, while blue asters are reminiscent of some horrific death-dance of children. Though what that fate might be is left unstated by the narrator, its implication is every bit as fearful as an awful noise in the next room, the rattling of a locked doorknob about to give way.

September evening; the shepherds' dark calls echo
Through the twilight village; fire sparks in the forge.
Violently a black horse rears up; the maid's hyacinthine locks
Strain at the heat of its purple nostrils.
Softly the doe's scream freezes at the forest's edge
And the yellow flowers of autumn
Bend mutely over the pond's blue face.
A tree burned down in red flames; bats flutter up with dark faces.


Pantano has done a nice job translating a very difficult poet in the selection that I read. The difficulty in translating Trakl comes from his very simplicity; there is so much implied in his core set of images, resonating in archetypal ways, that this is no doubt a formidable challenge for any translator. I'll be looking forward to reading the full volume when it appears.

There is no announcement yet on the Black Lawrence Press site of a specific date in 2013 for publication. Thanks once again to Daniele Pantano for sharing his translations and allowing another view of the excellent work of Georg Trakl. I'll keep you posted on any forthcoming news about this collection when I get it.

Meanwhile, if you'd like to see more before 2013, Erbacce Press, Liverpool, has published a chapbook of Pantano's Trakl translations entitiled In an Abandoned Room: Selected Poems by Georg Trakl. He tells me it is selling well at (heads up: a blaring version of "Paperback Writer" will greet you when you click):

This week's featured broadside is Lilliput #114, entitled Slides, by long time small press icon, Hugh Fox. Fox was right there at the beginning of the small press movement that grew out of the Beat writers and the mimeo revolution. He is something on an institution in himself. It has been a privilege to publish his work in Lillie occasionally over the years. Slides is what the name implies, a series of images, in this case 12, that flash quietly before us in the dark, some of which remain long after the lights are turned back on and the drinks are refreshed. I particularly like this one, which closes out the set and quite simply captures a moment in time.

Reaching down into the grass
boiling with crickets, lifting a moth
off the wall as carefully as I can and
letting it out into the night, only it falls
on to the front porch instead of
flying away.


Least we forget, today is the birthday of Jack Kerouac, whose work has given great pleasure to unsung millions. As I'm wont to do, when I think of Jack I like to walk across the room and open up his Book of Haikus randomly to see what he is about these days:


Ah, the birds
--at dawn
my mother and father


If ever there was a poem in the spirit of Issa, this it. Truly lovely and all-embracing in its compassion and implied detail.

And the final song goes to Master Issa:

'twill be phun (for me) to compare Pantano's (new, forthcoming) Trakl translations with Stillmark's

me-thinks both ways ((from what I see (and I have Stillmark's book of))
will, most certainly extend the possibilities.

neat what Wittgenstein (Trakl's benefactor) said upon first reading Trakl's poems:
'I don't understand them. But their 'tone' delights me. It is is the tone of true men of genius.'

looking forward to this coming book..

I have Stillmark and Skelton's translations and look forward to this new version. I'm a big, big fan of Trakl. In fact, I found Issa's Untidy Hut while searching connections between James Wright and Trakl. Keep us informed!

Thanks, Theresa. I came to Trakl via Wright, I'm guessing you came to the previous post on Trakl/Wright as a way to the Hut. I will let folks know the more info I get from Daniele.

These poems are phenomenal, but this is known already, these particular translations capture an intensity in the vision that is rare among translations.

Jhon, thanks much for the thoughts - I'll make sure Daniele gets them.

Alexander, thanks very much. Don