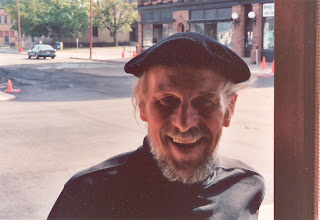 t. kilgore splake is a one of a kind, post-Beat, small press poet, with a romantic streak bigger than his beloved UP of Michigan and a body of work unrivaled by most of his contemporaries. You can set your clock by the deliberate, measured pacing of his free verse machinations and if you don't love the soul of this man, well, have I ever got some overpriced, upscale, academic poetry I'd like to pawn off on your dismally pretentious ass.

splake's poems are like missives, journal entries from a fading, too-soon-to-be-gone world. What he loves, what he wrestles with, who he is, is all there, right in the poems. As someone who came late to the "profession" (the first two definitions of that word say it all: "1 : the act of taking the vows of a religious community 2 : an act of openly declaring or publicly claiming a belief, faith, or opinion" i.), one of his major themes is his ongoing battle with "dame muse" or "damn dame muse." The declarative nature and gender of this theme are telling. His heroes are championed throughout his work: Richard Brautigan, Hemingway, Harrison, the Beats, Vonnegut, Bukowski ... the list is long and his admiration unflagging. Even his name - kilgore from Vonnegut, splake, as in a type "trout," a simultaneous tribute to Mr. V's great character and the trout swimming upriver from the Brautigan mythos, and the t., well, I'm not telling about that - is collage as homage. He is a great lover of the outdoors, a fisherman, an inveterate hiker of the nearby Cliffs, an excellent photographer, and a man of decided opinions.

Oh, and did I mention: he is a wonderful poet.

There have been many fine collections of his work throughout the years, including poetry, prose, and photography. He has been championed by many such as Jim Chandler of Thunder Sandwich, whose interview with the poet is a great place to start for the uninitiated. Though his work may not appeal to all and, if we are honest, whose would, those who are attracted to it grab tight and hold on. 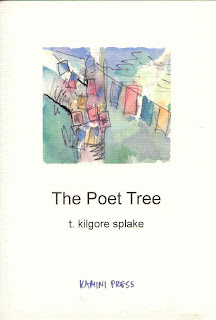 It is with great pleasure that I received in the mail recently a beautiful little chapbook, published by Henry Denander's Kamini Press of Stockholm, entitled The Poet Tree and Other Poems. Though splake writes well in longer forms of 1, 2, and more pages, this tiny little volume concentrates on one of his greatest assets: the short poem, 15 or so lines or less. Here is the opening salvo:

In 3 short lines is captured quite a bit of what splake is about: the beauty, and his fascination with, nature, a drop or two of sacrilege, and an all pervasive appreciation of art.

No mean feat, as it took Proust 7 lengthy volumes and over 1.5 million words to capture what Splake sketches in a telling 9 words.

He can capture himself, too, with a stark honesty, in this poem putting the photographer's precise eye to fine effect:

Here the element of nature is transmuted into an almost haiku like epiphany. Like his old friend and fellow poet, Albert Huffstickler, splake has a thing about coffee shops, often chronicling them in his verse. Spring, by the way, is a big, if brief, thing in its coming to the UP.

There are ups and downs in his work, emotional swings of elation and depression, characteristic of many an artist. One of the ways the poet has chosen to deal is to go head on and wrestle the angel:

"sunlight here i am"
bukowski

Like Ginsberg & other Beats before and after him, splake chooses to shed all articles in a rush to catch the rhythm of meaning, the click-clack sound of spirit riding, riding, straight into the midnight heart of It All. Yes, there is darkness and there is much light, there is the ultimate beauty of life and what is.

Norbert Blei, at poetry dispatch and other notes from the underground, did an excellent recent post on splake, replete with poem and an essay by the poet on what exactly "the poet tree" is. To tempt you over to this essay, here is a picture I lifted from there: 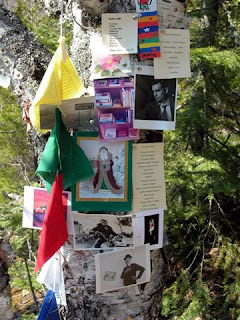 You can get a nice signed edition of this beautiful little chapbook with over 30 of splake's finest poems for a mere $9 from Henry Denander at Kamini Press. I highly recommend it.

Of course, I'm biased. The poet and I have corresponded for nearly 20 years, him sending me envelopes full of xeroxed articles of books of interests and poems, his and others, I sending back and commiserating over the collective doom of his much-loved Cubbies and my much maligned Buccos. Yes, baseball is another shared romance of a bygone era, two old fools on a virtual park bench lamenting the way it was.

And my bias goes beyond this epistolary friendship of the non-electronic variety. My friend has honored what I do, if only by association: imagine my true and happy surprise to read this, the title poem of his collection, for the first time in this chap:

Of course, it is possible that lilliput is just a modifier here, signaling the diminutive nature of the poems on the tree and in this collection and has nothing to do with Lilliput the magazine (4 splake poems from previous posts) at all. But I'd like to think differently, especially since it was italicized (of course, there is that other Lilliput) and knowing how splake love's to refer to the things he enjoys.

Yes, I believe I'll think otherwise, mistaken or not.


This week's featured broadside is the beautiful Selected Wu Songs by Linda Joan Zeiser, published as Lilliput Review #108. Here's a delightful taste of that beauty as spring rapidly approaches:


The tulip path is covered now
with reds and pinks and whites and blues.
2,000 petals hold my heart
in a perfumed ritual that has no end.


And, for context, one more:


How many stars have fled the night,
how many seas have parted?
Within the soft contours of her,
no other questions matter!

And with many lifetimes collective wisdom, Master Issa:


once again
I've managed not to die...
blossoming spring

don't think i've ever read anything by splake, but i'll be looking into that chapbook. thanks for pointing it out!

This man may be too good to be true -- Brautigan and Bukowski and baseball. To say nothing of the UP culture (I once dated a girl from Escanaba..).

not only a sense OF place

but, simultaneously, a sense of BEING in place...

thanks.. at first view of his photo I thought of/flashed on:

anyway... as soon as I finish The Air-conditioned Nightmare


will explore his "stuff"

Greg, definitely check out the links from Jim Chandler - Ed points to splake's amazing photographs too -

Here's 3 more poems besides those I linked to & OH look, a 36 page .pdf of poems entitled "Autumn Whispers." Ah, now that gives us all something to do for a bit ...

Hey, Jim, he does hit the 3 B's ... also big on UP Michigan college football, especially around the time the Cubbies traditionally go into their September fade ...

I've known splake for more than a quarter century and he is indeed a unique spirit. For the uninitiated, below are some links to more splake material--even a review he wrote.

Hi, Jim, many thanks for these ... much appreciated.

This page is didicated to splake.