Roberta Beary: nothing left to say 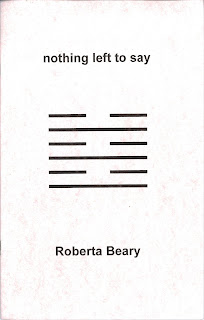 Roberta Beary is one of the finest modern haiku poets I know. She was the winner of the 1st Annual Bashō Challenge here at Lilliput, which is probably the most modest of her many honors. With her 2009 chapbook, nothing left to say, pictured above, she joins an esteemed lineup in the King's Road Press low frills "Hexagram Series." Each of the volumes in the series is 16 pages long; nothing left to say contains 35 of Beary's haiku.

The hexagram from the I Ching on the cover is #63, "Completion." As annotated here, it is described thus:


The transition from confusion to order is completed, and everything is in its proper place. After a long and difficult period, it is finally time to rest and remain quiet.

The poems, themselves, are of a characteristic high quality. The opening haiku, from which the title derives, is a fine example modern English language haiku:

nothing left to say
an empty nest
fills with snow


This poem breaks in an one of traditional ways for modern English language haiku; the first line posits "the conclusion," with a 2 line image that follows that either describes or evokes the thought. Flip the poem around, though, for another traditional approach; with the 2 line image first and the 1st line as the conclusion the poem doesn't work nearly as well. Even with the present tense, making the 1st line the last gives it a finished feel that diminishes the power and nature of the experience. What is happening is ongoing, it is now; the reversal would undermine the continuous moment.

Next, an 8 word little poem, with considerable emotional power:


With one word ("breakup"), the poet has encapsulated the whole situation. With its description in the 2nd and 3rd lines , the breakup is shown to have a power which geographically spans a tremendous distance, a distance which no doubt is exacerbated over the phone. Further, the use of the verb "cracks" lends the poem a tone of an almost seismic nature. The effect conjured is figuratively earth shattering, at once telling a narrative and presenting it with perfect metaphoric resonance, incredibly, without the metaphor.

I love this little poem and it probably is purely a matter of personal taste; this is what I think of as a "big picture" haiku. Placing the lovers in the midst of nature, the artist may simply put down her brush and walk away. She's done her job to perfection. There may be other movement implicit in the poem: the weaving in and out of the lovers' words, the possible physical movement of the lovers themselves as they speak. In this case, however, the unstated is just that, for a reason; the most important movement here is that of the fireflies, the how and why of them moving. All else is unimportant.

Why is the fireflies' movement so important? Is there something in it to be learned of the how and why of our movement? Does that movement mirror the lovers themselves?

Obviously, I think all of these evoked questions give the poem its intended resonance. Whether you agree that all that is important here are the fireflies really is a matter of opinion. But this little poem, which appears in 1st Annual Bashō Haiku Challenge Chapbook, is one of the highlights of a fine collection of haiku by Roberta Beary.

Erie poet Lonnie Sherman is one of a kind. In the early years of Lilliput, I published two chapbooks of his work, a couple of broadsides and numerous shorter poems. It was my great privilege to publish that work. Lonnie is one of the genuine post-Beat voices; not one false note about him. He works in longer forms, so he is not a natural for Lilliput. His work, however, is a natural for my heart. This week's featured broadside poem is from issue #114, which saw the light of day back in November 2000. It is one of 3 poems in that issue. Lonnie's work is done in all caps so I thought, rather than reproduce it here, I'd scan in the pages so you might get a feel for the look, a mental tactility, if you will.

As a bonus, the page also contains a drawing by a world renowned artist, making for what I hoped was a fine complementary presentation. If anyone can guess who the artist is, I'll give them a free 6 issue subscription to Lilliput (or a 6 issue extension to a current subscription) or copies of Lonnie's two chapbooks and 3 broadsides. 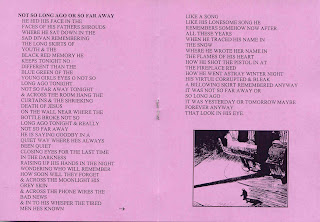 And a final note from Master Issa:

if my father were here--
dawn colors
over green fields

The empty nest haiku was partiuclarly poignant for me. Powerful piece for sure.

I liked the small exercise you did here with reversing the order of the lines in the nest haiku. I also find that the poem with the original line order (as it's given here) speaks to me more immediately than it does if the line "nothing left to say" is put at the end of the poem, though I still found the poem effective with the reversed line order. Quieter maybe, though not all of the energy dispersed.

A crow on a bare branch --
Autumn evening

When Rexroth translated this one, he reversed the order of Basho's lines, so his translation read:

Autumn evening --
A crow on a bare branch

Rexroth's version was the first translation I read of the poem, and I've always preferred it the other translations I've seen, which generally keep the line order as it was in Basho's original. Rexroth is maybe an exception in this regard, as a translator -- he had an ear and eye as keen as those of most of the poets he translated, and had (usually) good instincts about when to play a little with the translation.

One of the first articles I wrote in my blog, several years ago, was about Japanese poetry and some of the translations I've come across. It's here, if you care to take a look.

that "empty nest" haiku is definitely a strong one. Roberta is one of those rare poets who can't seem to come up with a haiku I don't like.

Charles and Greg, glad you liked that one ...

Lyle, I wonder if it isn't a case of which Basho version is read (and liked) first. In the 1st one you mention, it is almost as if the crow has brought autumn with him or, more specifically, has brought the revelation of "ah, it's autumn" to the viewer/reader. The second, Rexroth's, which is fine, seems more almost a philosophic statement. Still, I'm not sure I would have thought this about Rexroth's without having seen them both together.

I see from your excellent post that we have come to the exact opposite conclusions! Excellent, I believe Basho might enjoy that. It certainly speaks to the open spaces not being empty.

I think many of us have come to Eastern poetry via Rexroth and I am very thankful for it. I love your idea of the short forms being epic; you'll never get an argument from me. In addition, Yosano Akiko is one of my favorite of all poets - lots of posts contain translations of her work. I will be putting together a small chapbook of these, translated by Dennis Maloney, to be published in the Modest Proposal series, later this year.