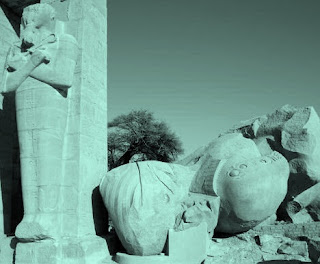 Those of you who have been following these posts for awhile know I have many little vices (and many more that I'm not telling). Some of those include pop bands of perhaps questionable value. One band, making there second appearance on the Sunday Service, is Procol Harum and, I'm happy to say, I'm not hanging my head here. I've blogged about them more than a few times; once an entire post was picked up and reprinted on the biggest PH site on the net, Beyond the Pale. As far back as the previous Lilliput blog, Beneath Cherry Blossoms, I printed the lyrics to their song "Conquistador," in tandem with Shelley's Ozymandis, which I always felt was the song's inspiration.

All of which brings us to today's feature: that's right, it's "Conquistador," today being the birthday of the band's outstanding organ player, Matthew Fisher, who no doubt will be best remembered for his beautiful contribution to their signature song, "A Whiter Shade of Pale" (and the nasty lawsuit that was recently settled in his favor over said organ part).
So as not to end on a sour note, here's E-Verse Radio's discussion of Shelley's "Ozymandis," turning lemonade back into lemons.
Um, wait, on second thought, ending with lemons would make it a sour note. Let me, therefore, simply say, hey, E-Verse guys, I liked the pictures.


And Issa, on the same subject:


at my hut
what will come of it?
spring's first dawn


best,
Don
PS A complete list of all 45 songs is available on the stand alone LitRock website, along with a jukebox to listen to songs separately or altogether. Of course, the Jukebox is also available on the sidebar of this page.
Suggestions for future feature songs will be rewarded with riches beyond your wildest dreams, if your dreams are modest and your idea of a good time, well, wistful.
Posted by Issa's Untidy Hut at 7:38 AM

just spent about 4 hours LOOKING EVERYWHERE for
my Salty Dog..

left her my copy of... and have yet to retrieve it or get it returned.

She, that next year, married a rock-n-roll drummer - last name Bosh and I guess they ran off with (my) A Salty Door..

AND
I have an ubopened c-d re-done copy of HOSES..

will open as soon as my daughter returns my SONY boom-box and give it a whirl... this will be my very first listen to
Patti Smith and her band... which surprises me because I was all over Manhattan in late 60's and 70's... I guess that I (an Fay and some others) were even outside the Outsiders..

(I guess I was thinkwing
of The Doors!

"HOSES" should be "HORSES"

whoever said "poets are smart" ?

Ed, 2 of my fav records .. kind of like your alternate titles Hoses and Salty Door.

You can't stick that cd in your computer and listen? Just asking?

yeah I can do that Micah put in a thingy that allows me to play cd s AND
watch movies!
and I got one of them little PYLEPRO PCA1 stereo power amplifiers 2x15 watts and neat little SONY speakers that are "boss"..

the cd player is from an old 'puter.. it is a

heck, I could fucking just spend the rest of my life in this little room... same one as in the photo...

Thank god I have to make money otherwise I'd never never the attic ...

figure it all out:

clothes
lunches
transportation
taxes/ss//group health insurance/medications for depression, anxiety, insomnia,
annual contributions to charuhtees
cost of required computers and computer services
PLUS you get paid for 40 hours (if lucky) and (including what you do at home for free) you work 63 hours A WEEK!

must cost about seventy-five cents out of every dollar just to have a "real" job!

you only need a used Gibson and a 3-chord vocabulary!

Dare I put in a plug for Rush's "Xanadu"?

I do believe I dare! Hee.

one of my all time favorite movies:
Ronald Coleman in
Lost Horizons..

Ronald Coleman had the greatest screen voice of ALL TIMES

is this what you refer to?

LAV: Rush's Xanadu already on the forthcoming list but, for the effort, two new issues to you ... more soon ...

And Lost Horizon one of my all-time favs also ... Sam Jaffe as the head guru mucky-muck ... here's a little post I did at work about how "Lost Horizon," the novel, turned me on to the whole reading thing ...