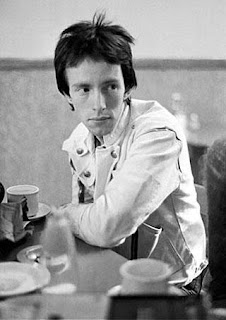 Today is the birthday of drummer Topper Headon of the Clash - this occasion of its celebration being something of a miracle and here's why - and, to that end, this week's selection for the Sunday Service is "Ghetto Defendent," from the album Combat Rock. The cut features a vocal reading by the indomitable, immortal Allen Ginsberg. And now for something really special:


Since I am immersed in the poet Gerald Stern at the moment (more on this in Friday's post), here is Stern's lovely "Lilacs for Ginsberg." And an audio reading may be found here.

I was most interested in what they looked like dead
and I could learn to love them so I waited
for three or four days until the brown set in
and there was a certain reverse curl to the leaf by
which in putting my finger on the main artery
beside the throat I knew the blood had passed on
to someplace else and he was talking to two
demons from the afterlife although it was
just like the mountains in New York State since there was
smoke in the sky and they were yelping and he was
speaking in his telltale New Jersey English
and saying the same thing over and over the way he
did when he was onstage and his white shirt was
perfect and the lack of air and the lack of light
aged the lilacs but he was sitting on a lily
in one or two seconds and he forgot about Eighth Street
and fame and cancer and bent down to pick a loose
diamond but more important than that he talked
to the demons in French and sang with his tinny voice
nor did he go on about his yellowing sickness
but counted the clusters and said they were only stars
and there were two universes entwined, the
white and the purple, or they were just crumbs or specks
that he could sprinkle on his pie nor could he
exactly remember his sorrow except when he pressed
the lilacs to his face or when he stooped
to bury himself in the bush, then for a moment
he almost did, for lilacs clear the mind
and all the elaborations were possible in their
dear smell and even his death which was so
good and thoughtful became, for a moment sorrowful.


Such lovely, amazing enjambment! As Gerald mentions in his reading, when we say lilacs, poetry fans think Whitman, so there you are. Lilacs for Lincoln, lilacs for Ginsberg!

And since we're smelling flowers here, of course, it's onto the man himself.


I walked on the banks of the tincan banana dock and
----sat down under the huge shade of a Southern
----Pacific locomotive to look at the sunset over the
----box house hills and cry.
Jack Kerouac sat beside me on a busted rusty iron
----pole, companion, we thought the same thoughts
----of the soul, bleak and blue and sad-eyed,
----surrounded by the gnarled steel roots of trees of
----machinery.
The oily water on the river mirrored the red sky, sun
----sank on top of final Frisco peaks, no fish in that
----stream, no hermit in those mounts, just ourselves
----rheumy-eyed and hungover like old bums
----on the riverbank, tired and wily.
Look at the Sunflower, he said, there was a dead gray
----shadow against the sky, big as a man, sitting
----dry on top of a pile of ancient sawdust--
--I rushed up enchanted--it was my first sunflower,
----memories of Blake--my visions--Harlem
and Hells of the Eastern rivers, bridges clanking Joes
----Greasy Sandwiches, dead baby carriages, black
----treadless tires forgotten and unretreaded, the
----poem of the riverbank, condoms & pots, steel
----knives, nothing stainless, only the dank muck
----and the razor-sharp artifacts passing into the
----past--
and the gray Sunflower poised against the sunset,
----crackly bleak and dusty with the smut and smog
----and smoke of olden locomotives in its eye--
corolla of bleary spikes pushed down and broken like
----a battered crown, seeds fallen out of its face,
----soon-to-be-toothless mouth of sunny air, sunrays
obliterated on its hairy head like a dried
----wire spiderweb,
leaves stuck out like arms out of the stem, gestures
----from the sawdust root, broke pieces of plaster
----fallen out of the black twigs, a dead fly in its ear,
Unholy battered old thing you were, my sunflower O
----my soul, I loved you then!
The grime was no man's grime but death and human
----locomotives,
all that dress of dust, that veil of darkened railroad
----skin, that smog of cheek, that eyelid of black
----mis'ry, that sooty hand or phallus or protuberance
----of artificial worse-than-dirt--industrial--
----modern--all that civilization spotting your
----crazy golden crown--
and those blear thoughts of death and dusty loveless
----eyes and ends and withered roots below, in the
----home-pile of sand and sawdust, rubber dollar
----bills, skin of machinery, the guts and innards
----of the weeping coughing car, the empty lonely
----tincans with their rusty tongues alack, what
----more could I name, the smoked ashes of some
----cock cigar, the cunts of wheelbarrows and the
----milky breasts of cars, wornout asses out of chairs
----& sphincters of dynamos--all these
entangled in your mummied roots--and you there
----standing before me in the sunset, all your glory
----in your form!
A perfect beauty of a sunflower! a perfect excellent
----lovely sunflower existence! a sweet natural eye
----to the new hip moon, woke up alive and excited
----grasping in the sunset shadow sunrise golden
----monthly breeze!
How many flies buzzed round you innocent of your
----grime, while you cursed the heavens of the
----railroad and your flower soul?
Poor dead flower? when did you forget you were a
----flower? when did you look at your skin and
----decide you were an impotent dirty old locomotive?
----the ghost of a locomotive? the specter and
----shade of a once powerful mad American locomotive?
You were never no locomotive, Sunflower, you were a
----sunflower!
And you Locomotive, you are a locomotive, forget me
----not!
So I grabbed up the skeleton thick sunflower and stuck
----it at my side like a scepter,
and deliver my sermon to my soul, and Jack's soul
----too, and anyone who'll listen,
--We're not our skin of grime, we're not our dread
----bleak dusty imageless locomotive, we're all
----beautiful golden sunflowers inside, we're blessed
----by our own seed & golden hairy naked
----accomplishment-bodies growing into mad black
----formal sunflowers in the sunset, spied on by our
----eyes under the shadow of the mad locomotive
----riverbank sunset Frisco hilly tincan evening
----sitdown vision.

say hey
and do check into Stern's

What I Can't Bear Losing


especially chapters CAVES and GINSBERG AND I

:
"How weary I used to get, and resentful and impatient, when people compared me to or mistook me for Allen Ginsberg, as they did. Particularly when it was such a crude comparison. Both of us East-Coast Jews, quick-moving rabbis. (etc)."

Interesting version of that song.