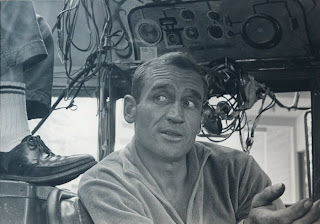 It's week 52, a full year's worth of music with direct literary influences (LitRock) from Issa's Sunday Service. What better way to celebrate than with the Grateful Dead and their wonderful live cut, "Cassidy"?

The story behind "Cassidy" and it's odd spelling may be found here: Cassidy's Tale. Besides Neal Cassady, there is another Cassidy to which the song refers.

It's hard to believe this is the first appearance by the Dead on the Sunday Service (though it isn't Neal Cassady's) - a few weeks back they did some backup up for the Reverend Gary Davis, but this is the first time as a headliner. The reason it seems appropriate to celebrate with a Dead song is their generosity over the years with their fans. Music as a shared, communal experience speaks volumes.

It's been an interesting year. Most of the 52 songs, with the exception of a few, can be heard on the Jukebox on the sidebar or at the Issa's Sunday Service homepage. The full list as they originally appeared may be found here. I had an interesting experience with one song; if you'd like to know the details, I'll be happy to supply them. Though you can hear it here, anytime. All I'll say is it's a good thing that the work of William Butler Yeats is out of copyright in the U.S. so this artist no longer will be accused of stealing and profiting, by violating copyright, as happened in the past (page down for details beginning with the 6th paragraph, especially the juicy bit about how said artist brags that his lyrics are better than Yeats).

To accompany the above tune, here's another live version of "Cassidy" from the Dead.

This week's feature poem comes from issue#78, March 1996 and is by Deloris Selinsky. Other poems from this issue were featured in two past posts.

Hot, muggy, warm weather has finally arrived here in Michigan, which means the dead discs get pulled from winter storage for three months of weekend rotation.... will always be my 'summer tour' band.