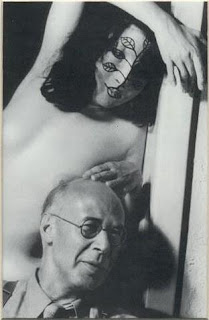 Here is the third and last quotation from The Hamlet Letters by Henry Miller (in case you missed the first two, they may be found here and here):

Similarly, it seems to me, the dreams of the idiots today and for the last hundred years or so, will also be realized in the centuries to come. That dream is of economic independence, and I have no doubt it will be achieved, though perhaps in a way and through a form of life wholly unexpected. I believe that the Machine will be incarnated and will dominate man's life in dual fashion, as he has allowed himself to be dominated in the past by other ideas. I believe it will take centuries yet for man to pierce the fallacy of the machine way of life. I believe there will even be a certain amount of good resulting from his life with the machine, but ultimately it will be discarded–because it has no reality. The subservience to the machine seems to me almost like the last lesson for the narrow restricted personal view of life which man has. The world will really become the Hell which the machine, as a surrogate form of life, symbolizes. Man will come face to face with himself and see himself as a substitute for the real thing. He will have to surrender his narrow conception of life, his unreal desire for security and peace, for a protection from without, a protection wholly artificial and created out of fear. He will have to learn to live, not only with others, but with himself. He will discover that his comfortable world of economic bliss and security is in reality a straitjacket. He will see that he is surrounded by useless appendages to himself, the concrete manifestations and crystallizations of his own fears. The machine will become a myth as the Avenging Furies of the Greeks have become myth for us. Nothing can prevent this long and tedious experiment, for this is the real desire which is at the root of our present-day conflicts. It doesn't matter what ideal or ideology is proclaimed, in what name men fight and die: what is real and what will be made manifest is this desire for economic security. They will have it, the men to come, and they will wrestle with the evil which is bound up in this specious blessing. There will be men a thousand or two thousand years hence who, in their frantic desire to preserve the status quo, the era of economic bliss, will point to us of today as an example of the horrible condition from which they escaped and into which they are in danger of relapsing. But they will not relapse back into our condition of things. They will relapse forward; they will fall back blindly on the invisible wave which carries the human race on from round to round of ever-increasing reality. They will be carried forward as dead matter, as the debris and detritus of a vanished order. The Hamlet dilemma, which today we call neurosis, seems to me to be a symbolic expression or manifestation of man's plight when caught between the turn of the tides. There comes a moment when action and inaction seem alike futile, when the heart is black and empty and to consult it yields nothing. At such moments those who have lived by illusion find themselves high and dry, thrown up on the shore like the wrack of the sea, there to disintegrate and be swallowed up by the elemental forces. Whole worlds can go to bits like that, living out what you would call a "biological death," a death which Gutkind calls the Mamser world of unreality and confusion, the ghostly world of Hamlet, the Avitchi of the Buddhists, which is none other than a world of "effects." Here the unreal world of ideas, dogmas, superstitions, hopes, illusions flounders in one continuous nightmare–a reality more vivid than anything known in life because life had been nothing but a long evasion, a sleep.

No, I didn't think so. Once again, a nod to Ed Baker for pointing me to this great little volume by Henry Miller. The astuteness, intellect, and prescience must be experienced to be believed.

Prophetic is often not too strong a word when it comes to the artist.


the human goblins
bow their heads...
dew dripping down

and he was largely ignored ...

""Neurosis is a "possession." You are possessed by a demon of self-destruction. You are compulsive. You destroy. It is not your voice, your body, your true self. A demon inhabits your body. It is the spirit of the past. It is the past selves superimposing themselves over the present, blurring it, and choking it.""

add next to your discovery/readings of Miller's "trip"

these machines
most certainly
allow us to self-promote
before we even/ever
have a self.