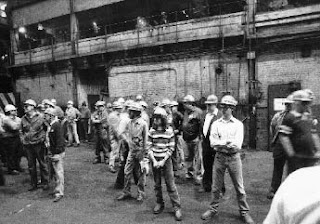 Without Gerald Stern, existence would be impossible. He is the grandmaster poet, you can see the spirit shiver through him as if pear leaves in a stiff, spring breeze. It is simple: there would be no poetry, anywhere, without Gerald Stern. I could read his poems everyday back before the beginning of time and forward decades past my supposed death. He is that one thing that the true master poets are; at once transparent and opaque, it isn't what he says, it's what he sings and dances, weeps over and cuddles, rages against and praises, blesses and curses.

To celebrate the fact that a full-length motion picture, Lucky Life, has just been released based on the poem of the same title, here's a little something to be nostalgic for a month and half before it, June 4th, arrives (your timing and mileage may vary, dependent on "geographic" locale).

Today as I ride down Twenty-fifth street I smell honeysuckle
rising from Shell and Victor Balata and K-Diner.
The goddess of sweet memory is there
staggering over fruit and drinking old blossoms.
A man in white socks and a blue T-shirt
is sitting on the grass outside Bethlehem Steel
eating lunch and dreaming.
Before he walks back inside he will be changed.
He will remember when he stands again under the dirty windows
a moment of great misgiving and puzzlement
just before sweetness ruined him and thnking
tore him apart. He will remember lying
on his left elbow studying the sky,
and the loss he felt, and the sudden freedom,
the mixture of pain and pleasure - terror and hope -
what he calls "honeysuckle."


plum blossom scent--
a hazy memory
of my nanny's house

you been in my library again!

What I Can't Bear Losing

is my section of my Uncle Al Silver's dad's brother's son, Harvey, 's

Just back from a week in the woods, more soon.