Albert Huffstickler: The Way of Art 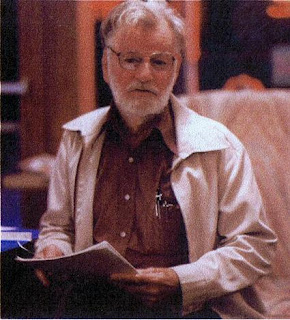 The Way of Art

It seems to me that
paralleling the paths of action, devotion, etc.
there is a path called art
and that the sages of the East would recognize
Faulkner, Edward Hopper, Beethoven, William
------Carlos Williams
and addresses them as equals.
It's a matter of attention and discipline, isn't
------it?–
combined with a certain God-given ability.
It's what you're willing to go through, willing to
------give, isn't it?
It's the willingness to be a window
through which others can see
all the way out to infinity
and all the way back to themselves.

Opening his collection of selected poems, Why I Write in Coffee Houses and Diners, "The Way of Art" is a manifesto of sorts, if a word such as this would apply a poem by such a man, such a poet, as Albert Huffstickler.

Like all his work, the language is simple, the images are plain (in this case, being a philosophical piece, virtually non-existent), and it is drawn from reality; this time it is the reality of who he is and what he does rather than the reality of what surrounds him which is so predominates his other work. It is comprised of 4 simple sentences: one declarative, two questions, and a final summing up. At that, the questions themselves are rhetorical; he is leading the reader through as one would in conversation with a friend, saying "Here, here is what we do, here is why."

If I was forced back to the wall, finger thrust in my chest, and told, ok, one word, one word only to sum up one of the great small press poets of the 20th century, Albert Huffstickler, the word would be compassion. Plain and, perhaps, not simple, but compassion would be the word. All of his work, even that which looks intensely inward, is always ultimately pointed outward, is there for the sharing, the comparing, the summing up of who we are and what we are about on this little spinning pebble in the gutter of existence.

His work has always spoken to those for whom poetry has hardly ever even been a thought, let alone a purpose. This alone says all that needs to be said.

There is the many blossomed lotus; there are a thousand paths; there is one destination.

The purpose of the artist - "The Way of Art."


Here is a selection of 20 short poems by Huff, the tip of the iceberg, really, that were published over the years in Lilliput Review and have made an appearance here at Issa's Untidy Hut or on the former Lillie blog, Beneath Cherry Blossoms. If these amaze you as much as they do me just think: the longer lyric was really Huff's strength, anywhere between 24 and 60 or so lines. He told me he started writing short poems, sitting in the various diners and coffee shops he habituated, specifically for Lilliput.

I could never thank him enough.

Raw ravines
corrugated
by wind and rain
and time.

That little old lady has a purpose.
She's a cartographer completing the map of her life.
It's there on her face,
as contained, as exact as the will that lies
deep in that small, sunken breast.
She looks around her, laughs.
Another line forms,
another move toward the completion she already envisions.
There's nothing more for us here.
Let's leave her to her work.

The woman in
the corner,
white on black,
white skin,
black hair,
black dress,
lights a
long, white
cigarette,
the orange flame
bright
against her cheek.

You are a dark space
in which a circle
of tiny turquoise stones
revolves endlessly.

This is how Hopper would have painted it:
the line of yellow dryers
catching the sunlight from the broad window.
Man with his hand reached up to the coin slot,
head turned to the side as though reflecting,
woman bent over the wide table
intent on sorting,
another standing hands at her side, looking off -
as though visiting another country;
each thing as it is,
not reaching beyond the scene for his symbols,
saying merely, "On such and such a day,
it was just as I show you."
Each person, each object, static
but the light a pilgrim.

My father, the stone,
rests in my heart
awaiting his completion
with a dry persistence.

I let him wait.
As all stones must,
he is learning patience.

I think there is a way
to sculpt silence.
Perhaps that’s what
poems are:
sculptures of silence.


We have to learn
not to replace
perception with knowledge.
Forget science.
Pierced by starlight,
I know what a star is.


Write on my tombstone:
Once so easily distracted,
now focused.

In the house of rain
there are many mansions


I wanted to understand
so much all at once
but learned:
to understand everything,
begin with one breath.

And now your shadow
falling across the page.
Where are you?
Why have you abandoned
your shadow?

We forget we're
mostly water
till the rain falls
and every atom
in our body
starts to go home.


All those
I have mourned
will die
with my dying:
my mother's hopes,
and my father's doom:
all the faces,
all the rooms.


And you too shall
pass, the autumn
tells me, shaking
its leaves
in my face.

Issa is busy today muddling over the above. In the interim, he left this:

with a just-yanked
radish
pointing the way

Amazing poems. Thanks for posting them!

Don, your comments hit the heart of the matter. Reading Huff this morning makes me long for some rain. The depth of his writing so apparent in this grouping of his peoms...and the Eastern quality more apparent than ever. May his words live on forever and stir the souls of generations to come. I'm gushing, but this post so makes Huff come alive for me.

Magnificent poems post. Will treasure in the openings and closings of my cells. Osmosis and compassion, yes, everything. Thanks, Don.

@KAO, it feels like Huff has given us all a blood bond with his work as Donna says "osmosis and compassion," very happy you liked this grouping.

and Donna! "osmosis and compassion" sounds like a title to me...

Jay ... and they say there is no magic, sucking all the air out of the room as they do. Huff always felt that pain ...

Thank you for posting this, Don. And I can certainly relate to John's comment: "huff eased the pain of the work day today". I often read a few of Huff's poems during my lunch hour.

This is a gorgeous post. So many breath-taking poems. Thank you most especially for Huffstickler's "The Way of Art." I've been searching vaguely for some thing and didn't know it was this manifesto I needed. Hope it's OK if I re-post it on my blog. Thanks, Don. That poem about being mostly water... right on.

I admire a man who can spend so much time among humans and still see the good in them.

@Curtis ... glad you liked it, Huff just plain calls us all home.

@Lisa ... seems he has a way of just being there when needed. If you repost, just credit "Why I Write in Coffee Houses and Diners," perhaps with a link to somewhere it may be purchased. I don't link to amazon, hence the link to Powells but whatever works.

@Charles - spot-on my friend, knowing deeply all the flaws and loving anyway. Amazing.

Hi Don, I added a link to "Why I Write..." in my post. I always link to Powell's, too. We spent 3 or 4 days in Portland a few years back. I thought I'd died and gone to heaven when I first set foot in that bookstore. We should have brought an empty suitcase to carry home all the books we bought! A breathtaking poetry section they've got there!

Great, Lisa. I've been to some of the country's best independent bookstores and purchased from Powell's but have not gotten there yet. I can't wait.

To write one poem in my life that hits that place in the heart like Huffstickler's do. Wow.