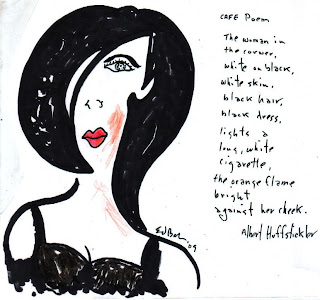 In response to last week's posting on Albert Huffstickler, poet/artist Ed Baker sent along a rendition of one of Huff's "Cafe Poems," with a haiga-like presentation. In the interest of truth or history or some such cultural folderol, Ed sent along an original drawing from 2003, entitled "Sophie's Song #123"; he added Huff's poem, a black dress, lipstick, and a discerning eye, resulting in the above rendition. Below is the original. 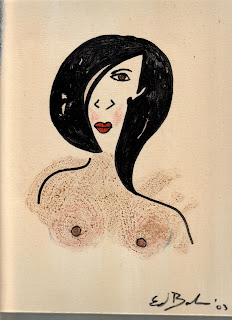 It's not often you come along a true original. Huff, certainly, is one of a kind. Ed is also as unique as they come. John Martone, Cid Corman, Diane Di Prima, Charlie Mehrhoff, Miriam Sagan ... these are just a few poets I've had the privilege to work with whose work is beyond comparison.

This go round, my appreciation to Ed, whose forthcoming broadside will be one of the 4 new issues of Lilliput Review that will start rolling out early in June. Stay tuned.

Here's another poem from the informal Cafe series Huff was always working on. It was first published in the one and only "long line" edition of Lillie (#32, June 1992) - yes, sometimes the length of lines is as problematic as the number in this tiny little mag. Enjoy.

That little old lady has a purpose.
She's a cartographer completing the map of her life.
It's there on her face,
as contained, as exact as the will that lies
deep in that small, shrunken breast.
She looks around her, laughs.
Another line forms,
another move toward the completion she already envisions.
There's nothing more for us here.
Let's leave her to her work.

to the old woman
doing laundry, the evening
willow bows

I recently read some poetry by a lady named Amal El-Mohtar that I really enjoyed. I believe she won the Rhysling this past year.

I've always believed the best visual poetry out there (like Baker's) is haiku-and haiga-inspired. Everything after that is Web 2.0 window-dressing. The West hasn't been able to match them yet for purity and clean design. My advice for them all is to work in Eastern forms for 10 years first!

The younger 'vispo' practitioners (a term I will never equate with real visual poetics)don't bring real writing experience,artistry and tradition to the table: they seem content to wing it or hide it in computer techno-tricks.

now the computer is continuing
that tradition...

in a mere 'click-of-a-mouse
we can (now) self-promote before we have a self ...

or a narrative/memory (of experiences)
from which to draw/write

Looking forward to the Ed Baker editions of Lilly--his is always interesting work.

Conrad, thanks for stopping by. Ed is one of the very best and is always to be found, if not lurking in the shadows here, then sketching them in, replete w/ moonlight ...

A. Scott, the ink is drying on those 4 new issues, one of which is Mr. Baker's broadside, as I battle off malware. I'm hoping to get contrib copies out this week and regular issues beginning the following weeks.

now June 6 and an huge package just in from you

I particularly like Miller's at/cover #175
and Charlie M's piece.

backgoaround on cover as on your yellow mat too
cloud-like
(also) clouds my mind.

full moon and I
really appreciate
being looked at

plus all of this for only a buck? maybe I should sign them? Bump things up to a buck-fifty?