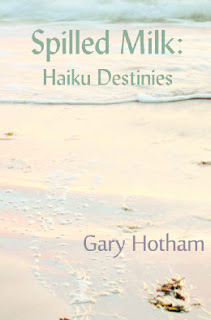 Some days I think the highest praise I can say about the work of a haiku poet is that her or his poems suggest the world.

Suggest, of course, is the operative word.  In classical haiku, an image is presented, a feeling conjured, and thus a contemplative source provided for the reader.  The poet interacts with the world; the reader interacts with the poem.  Ideally, as the adage goes, haiku is like a finger pointing at the moon; once you've seen it, you now longer need the finger. This is haiku as spiritual quest, as a way, for both poet in the composing and reader in the interaction.

Spilled Milk: Haiku Destinies is a new volume by Gary, published by Pinyon Publishing.  It is a full length collection of haiku, with a brief preface and afterword by the poet.  As Gary is one of my favorite contemporary haiku practitioners, I was very excited to hold this volume and that excitement has proved justified.

There are many fine poems in Spilled Milk.  As an example of what I was trying to express about suggestion, here is a poem from early in the collection:

enough sunrise—
a small window
in an old hotel

On one level, this is simply a perfect image, something a student of Buson might be justifiably proud of.  What makes this a fine haiku is, first, its evocative nature and, second, its emotion.  At first, I was tempted to say its joy (and, for me, it is joy) but the emphasis, the word the poem turns on, is its very first: enough.  I realized, in my hasty rush to meaning, that this is a word that might just as soon evoke despair or ennui.

This poem doesn't just suggest a world, it suggests a universe - a universe of possibilities, all while being firmly ground in a moment.   There is mystery here, too, a mystery of evocation.  The next two also hit this chord:


There is a psychological density to the first poem, certainly for the poet but also for the reader.  But, no, that's not quite right.   There is a myriad of possible reactions, that suggestiveness again, that makes the poem feel dense.  Does a particular reader's own relationship to a brother color that reader's reaction, is there a universal element or meaning that transcends such subjectivity?   Is the reader being nudged to connect the disparate elements in a certain way?

The second poem feels even more complex.  As with many traditional haiku, contrasting or seemingly unrelated elements are brought together in both poems and their meeting sparks - what?  How is an unattached piece of string like sudden dark clouds?    A puddle that can't "move out" like the birthday of a brother?

Here is a poem of a mere 6 words, 6 very carefully chosen and placed words.  Squeak suggests the sound of the hinge, but a pet bird or other animal, too, might squeak.  And hinges, obviously a noun, but which might also be interpreted as a verb.  Could the squeak be the dovetailing of the two sounds, the hinge and the bird?  Hinges generally squeak from lack of use.

plain darkness—
a firefly blinks with
the speed of light

In another approach, the contrast can be between big and small - Issa's snail climbing Mt. Fuji supplies a good example - can give us the big picture in another way, as with the light of the firefly moving at the exact same speed as that of the stars or a rocket or a laser.  Here that light is an example of a unifying element that unites all things.


protected
by warning signs—
walls left by the Roman Empire

Another big picture poem, this time the contrast being time, the paradox of the sign underscoring this great distance, yet also slyly unifying both eras.

too many stars
no one
is near

Again, a tiny 5 word poem that contains the visible galaxy.  There is a lot going on here - no one star is too near, prompts thoughts of how humans are always reaching for the stars.  There seems a frustration or a sadness here - couple this with another possible reading, that "no one" means there is no one person to share these too many stars with.

And why too many?

I could give many, many more examples of Gary's finely detailed renderings.  The collection is 132 pages, with a single poem per page, allowing the time and space for proper contemplation. There are also a number of beautiful interior paintings of leaves and birds by Susan E. Elliott, who also did the cover.  The volume sells for $15 and may be purchased at the link above or, what the heh, right here.

One final poem because who can resist a 7 word haiku that chronicles the end of the world:

This week's featured poems come from Lilliput Review #149 , from February 2006, where they shared a damp, lovely page.  Enjoy.

at once
a bird
cloud
puddle


a grayness
falling
on spring fields


cool air--
the half moon moves
across a puddle


PS  Get 2 free issues    Get 2 more free issues     Lillie poem archive
Send a single haiku for the Wednesday Haiku feature.  Here's how.
Go to the LitRock web site for a list of all 99 songs
Hear 'em all at once on the the LitRock Jukebox
Subscribe to Lilliput Review
Posted by Issa's Untidy Hut at 6:29 AM

very fine poems by hotham. thanks.

On Buson's Portrait of Basho

Old grinner,
What's under that sky blue cap?
Not haiku!

Indeed, tenzing, you are welcome. Don