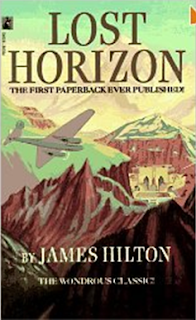 As we count up to number 100, this is the second appearance of Led Zeppelin on the Sunday Service, and a fine one it is. Both Plant and Page have said this is one of their favorite songs and there are lots of reasons to believe them.

The literary reference to Shangri-La means a lot to me personally. I've written elsewhere how James Hilton's Lost Horizon (1933) was a pivotal book in my reading career and, after a beer or two, I can really go deep on how very much it meant and how it continues to resonate in my life to this day.

Anybody got a virtual beer?

The set up of the novel is in the prologue, which takes place after the events of the main story. Two gentlemen, after leaving a men's club, continue a conversation about a mutual acquaintance they had begun at the club. One tells a story of meeting him on board a ship bound from Japan. Here is the hook which snares the reader:

"A few nights after leaving Japan, Sieveking was prevailed upon to give a piano recital on board, and Conway and I went to hear him. He played well, of course, some Brahms and Scarlatti, and a lot of Chopin. Once or twice I glanced at Conway and judged that he was enjoying it all, which appeared very natural, in view of his own musical past. At the end of the program the show lengthened out into an informal series of encores which Sieveking bestowed, very amiably, I thought, upon a few enthusiasts grouped round the piano. Again he played mostly Chopin; he rather specializes in it, you know. At last he left the piano and moved towards the door, still followed by admirers, but evidently feeling that he had done enough for them. In the meantime a rather odd thing was beginning to happen. Conway had sat down at the keyboard and was playing some rapid, lively piece that I didn't recognize, but which drew Sieveking back in great excitement to ask what it was. Conway, after a long and rather strange silence, could only reply that he didn't know. Sieveking exclaimed that it was incredible, and grew more excited still. Conway then made what appeared to be a tremendous physical and mental effort to remember, and said at last that the thing was a Chopin study. I didn't think myself it could be, and I wasn't surprised when Sieveking denied it absolutely. Conway, however, grew suddenly quite indignant about the matter--which startled me, because up to then he had shown so little emotion about anything. 'My dear fellow,' Sieveking remonstrated, 'I know everything of Chopin's that exists, and I can assure you that he never wrote what you have just played. He might well have done so, because it's utterly his style, but he just didn't. I challenge you to show me the score in any of the editions.' To which Conway replied at length: 'Oh, yes, I remember now, it was never printed. I only know it myself from meeting a man who used to be one of Chopin's pupils. . . . Here's another unpublished thing I learned from him.'"

Rutherford studied me with his eyes as he went on: "I don't know if you're a musician, but even if you're not, I daresay you'll be able to imagine something of Sieveking's excitement, and mine, too, as Conway continued to play. To me, of course, it was a sudden and quite mystifying glimpse into his past, the first clew of any kind that had escaped. Sieveking was naturally engrossed in the musical problem, which was perplexing enough, as you'll realize when I remind you that Chopin died in 1849.

"The whole incident was so unfathomable, in a sense, that perhaps I should add that there were at least a dozen witnesses of it, including a California university professor of some repute. Of course, it was easy to say that Conway's explanation was chronologically impossible, or almost so; but there was still the music itself to be explained. If it wasn't what Conway said it was, then what was it? Sieveking assured me that if those two pieces were published, they would be in every virtuoso's repertoire within six months. Even if this is an exaggeration, it shows Sieveking's opinion of them. After much argument at the time, we weren't able to settle anything, for Conway stuck to his story, and as he was beginning to look fatigued, I was anxious to get him away from the crowd and off to bed. The last episode was about making some phonograph records. Sieveking said he would fix up all arrangements as soon as he reached America, and Conway gave his promise to play before the microphone. I often feel it was a great pity, from every point of view, that he wasn't able to keep his word."

That is a hook few might wriggle off; it propels you on to know the wherefores and the whys. There is a touch here of Hesse's Journey to East (1932), which improbably gets mentioned here for the second week in a row.

Many remember Frank Capra's wonderful film of Lost Horizon (and the disastrous musical version made in the 70s). Here is Frank Capra, on the Dick Cavett Show, with his own incredible story about throwing two reels of the film in a furnace as the final single act that created a classic film:


Oh, the plane that went down with Conway on board that precipitates the finding of Shangri-La was traveling from Baskul to Peshawar, over Kashmir.

Here's is a video of Robert Plant and Jimmy Page, with large ensemble, performing a more Eastern inflected, lovely version of "Kashmir," that still rocks mightily. The song appears on the album No Quarter, a Page Plant collaboration from 1994.


This week's featured poem comes from Lilliput Review, #101, which has been featured twice before. Here is a sad, lovely little poem by Glenn Ingersoll, that puts the period to resonance.


I look to make sure
but the telephone is not ringing

the thinking about you
is ringing


PS Get 2 free issues Get 2 more free issues Lillie poem archive
Send a single haiku for the Wednesday Haiku feature. Here's how.
Go to the LitRock web site for a list of all 97 songs
Hear 'em all at once on the the LitRock Jukebox
Subscribe to Lilliput Review
Posted by Issa's Untidy Hut at 9:01 AM

the Ingersoll poem is fabulous!

Thanks, Conrad - originally published 12 years ago, still packing quite a wallop.

cld jus be (a) preface to my next chapter of SG

he hit rock-bottom with this one:

It's on the list for inclusion in the Lillie anthology.